How to combat voltage drop on a 5v addressable led strip

I did some research and it turns out that one LED draws around 60mA at full brightness, so the entire strip would take around 18A at full brightness. I use an old PSU from my computer which is capable of delivering 20A at 5V. The controller for the strip is an Arduino Uno. Below is the circuit I have: 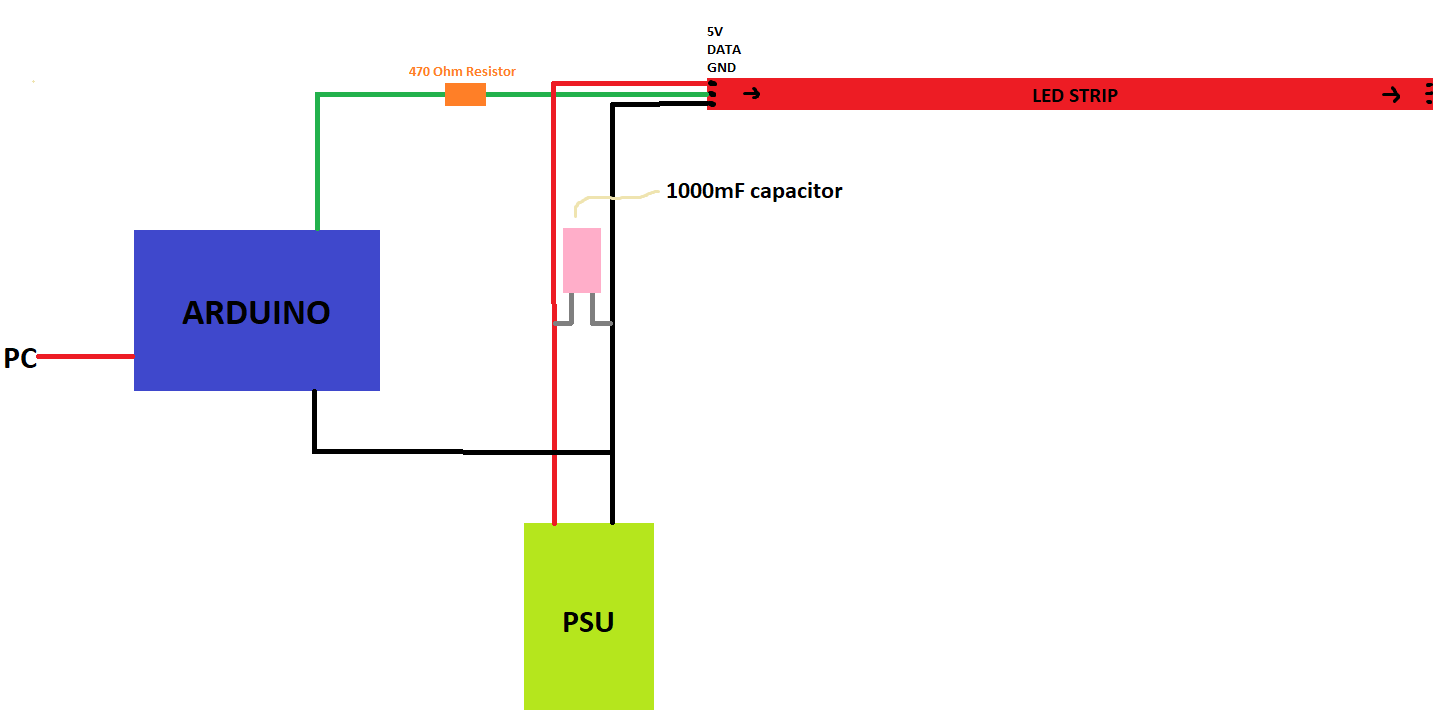 The problem is, when I execute a program that sets all LED's to WHITE, the further away from the start of the strip, the leds become yellow and red at the end. If I set them all to WHITE but at less brightness, the first 20-30 LED's glow white while others just blink random colors. Same thing happens with any other script, for example the rainbow fade works on first few LED's while others flash random colors.

My question is, how do I inject voltage into the strip without making the design look like overhead power lines? Do I need to inject the data line too?

I bough a 2.5mm^2 wire but it looks too overkill, can I use something a lot thinner to use the strip as an actual flexible strip?

how do I inject voltage into the strip without making the design look like overhead power lines?

Run secondary 5V and GND wires that you connect to the far end of the strip. You can route them however you like to hide them; no need to go alongside the strip.

In the general case, you can add power connections at several points along the strip — this is similar in effect to making the LED strip's power conductor thicker, thus having less voltage drop — but when your problem is "the far end is noticeably dimmer or discolored" then connecting both ends to the same power supply is a simple way to get more even brightness without having to make possibly ugly connections in the middle.

An additional trick is that if you make sure the two power wires are the same length and diameter (most convenient if you place your power supply near the middle of the strip while the wires go to the ends) then the two ends will always have the same brightness and the darkest point will be in the middle, which will be less noticeable since it's symmetric.

Do I need to inject the data line too?

No; the chips on the strip take care of repeating the data signal as it goes along.

In fact, the data signal is also delayed as it goes along the strip (due to the shift-register nature of the WS2812 system), so you couldn't just wire the data in at multiple places; you'd have to break the data line in the strip and control the sections as if they were several separate strips.

Not the answer you're looking for? Browse other questions tagged arduino led-strip voltage-drop or ask your own question.