EDIT AND IMPROVED QUESTION: After working at it, I figured that the problem was that my DAQ is reading the current that flows back into the DAQ through the neutral wire. My DAQ is powered with DC power. If I were to throw in a Schottky diode or a reverse polarity diode, would I be able to eliminate the problem where the DAQ overwrites my accelerometer's data with the voltage data it gets from the reverse flow? I know that these diodes draw voltages around 300mV to 600mV, but the readings from my accelerometer will be in the 400mV range, and I don't know if the voltage draw from the diodes would affect the data read from the accelerometer in a significant manner. EDIT 2: Also, it turns out that there is a disturbance caused by the motor's EMF. The air has currents of about .1A when measured by a multimeter, and the current between the accelerometer fluctuates between .7A to 1.7A.

This is the bare signal (no filters) from the accelerometer while it's placed where it needs to be for an experiment, and the motor is off: 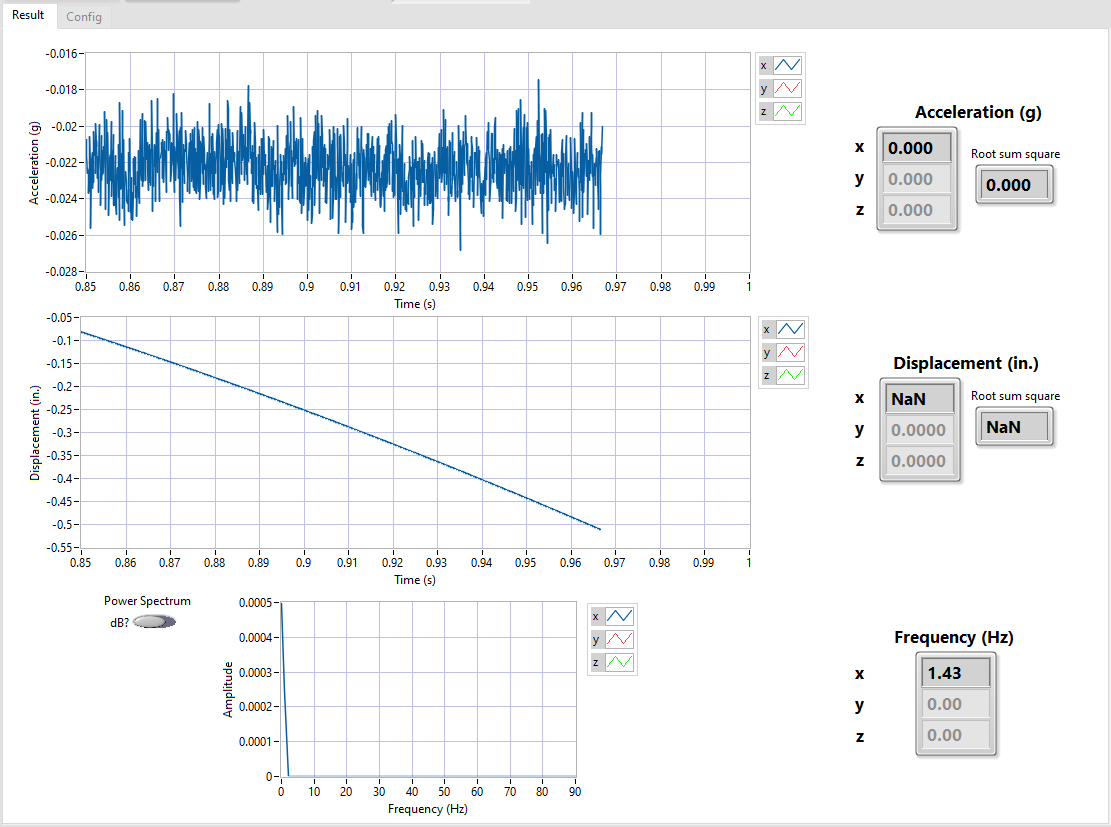 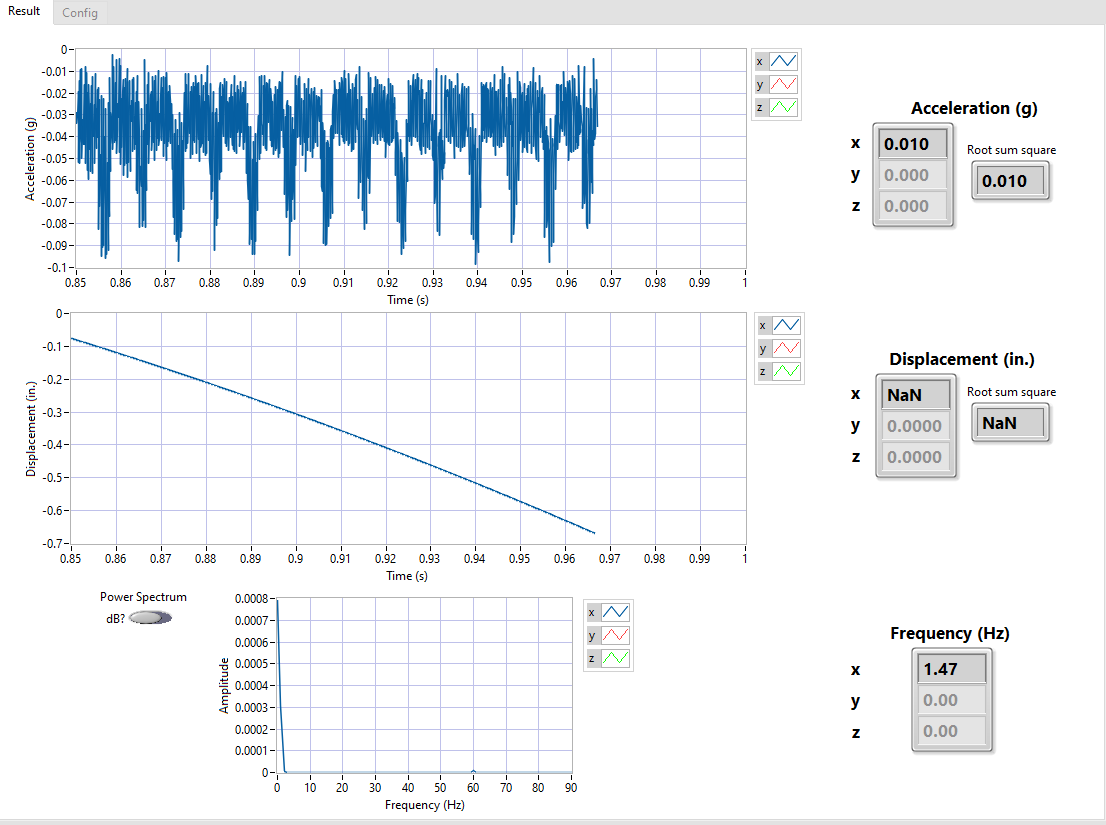 And this is the bare signal with the motor plugged in to a wall outlet about 40-50ft away from the daq's outlet with the motor still receiving power (motor not running): 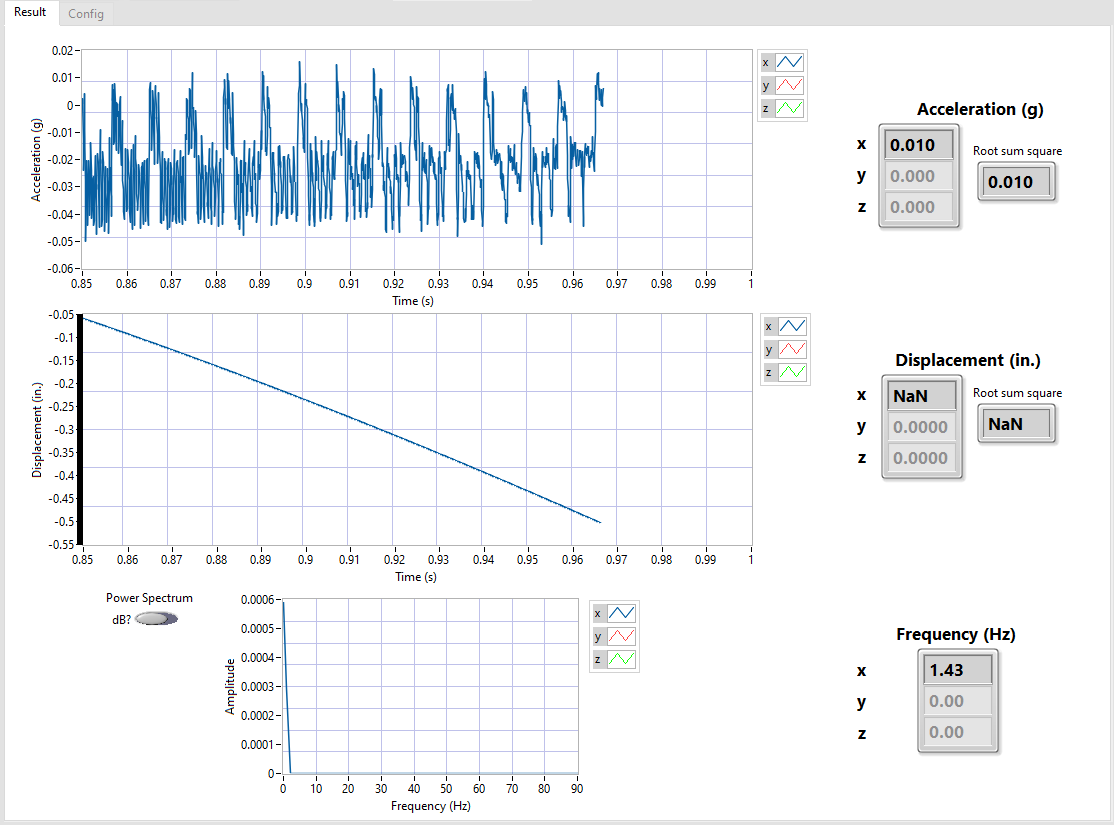 The noise caused by current being supplied to the motor seemed to be the same, just with the thinner spikes going in different directions. I thought that the noise could be generated just from the motor's EM field since it is a .5HP motor, but based on my measurements of the EMF, I think that this isn't really what's causing the problem.

This is the EMF measured in microTorrs of my phone sitting on top of the motor while it is off:

However, the following two measurements measure where the accelerometer sits. This first picture is my phone's reading while the motor is off:

Then, this picture shows when I turn the motor on at about 9-10s and off at about 15-16s. The large dip shown past 20s was from me picking up my phone.

So, from the information above, I don't think that the problem has to do with the motor producing an EMF when it is receiving current. The wire connected to the accelerometer has foil and braided shielding, and the shielding is attached to the daq's ground, and this wire is far away enough from the motor that the motor's EMF should be negligible. I was wondering what I could do to remove this noise caused by the motor just existing with current flowing to it.

I separated the motor from the steel table it was mounted to with some wood, and I also grounded the motor to a different ground from the DAQ's ground. Some interference still existed after this step, but the accelerometer's data was no longer being overwritten by the motor. The accelerometer will be mounted differently to the test fixture. The threads of the accelerometer being screwed in to the test fixture demonstrated a clear increase in noise. The more contact the threads had with the fixture, the more noise that was presented.

Not the answer you're looking for? Browse other questions tagged current noise signal accelerometer reverse or ask your own question.