I'm used to lamps with stickers that specifically tell me what max-watt bulbs I can use, usually 60W, 75W, or 100W.

Why is this lamp printed "660W", and what's its actually safe, maximum-wattage bulb?

Photos below. There's a UL sticker, but otherwise nothing else is printed or stuck on the lamp sides or bottom. 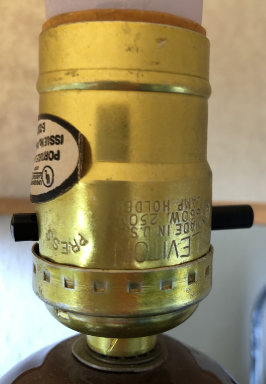 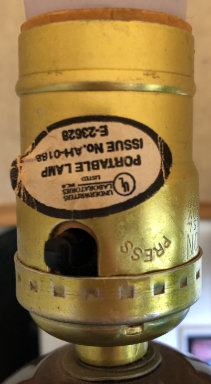 Without any other information, you are left with trial and error. With an incanddescent bulb you need to be concerned about overheating the shade. With an LED bulb the concern would be the temperature of the control circuit in the bulb.

The 660 watt rating of the lamp holder would indicate that should never be a concern, other parts of the lamp will always be the limiting factors.

Unless the shade is ridiculously small, I would think a 60 W incandescent would be fine and 100 W probably ok. For 150 W, you should probably have a larger clearance between the bulb and shade than would be usual for a single-bulb lamp. The safety issue comes down to the possibility of the shade catching fire, but you might also want to avoid discoloration.

If the socket faces up like that (bulb goes in base down), then the 660W limit has only to do with heat that might transmit down to the socket. You can use anything UP TO 660W, which for a table lamp would be ridiculous. Anything less than 660W is fine.

The 660W rating you see is the rating of the socket component of the lamp. Note that actual 660W lamps with Edison bases are basically unheard of.

The lamp fixture (luminaire) will have its own rating. For that you must consult its labeling and/or instructions, which are part of its UL Listing.

Search the luminaire, including the base, for anything about that.

Otherwise, 60W is a very safe assumption. And that is more than you'll ever want in the 21st century since CFLs came and went and LED is king... 60 actual watts of LED would be an insane amount of light.

The watt ratings of luminaires are thermal; they are the max that the lamp is certified for to not start a fire. As such, it is relevant to the heat output, not the light output.

Not the answer you're looking for? Browse other questions tagged watts lamp or ask your own question.

2
How could I replace the lamp on a regular projector for a LED lamp?
0
Is a 250V lamp compatible with both 120VAC and 220VAC?
0
How Much Heat will a 1800 Watt Bulb Produce?
2
high voltage igniter for carbon arc lamp
0
Modify 120v lamp dimmer for LED bulb
0
Replace lamp in old amplifier
0
How to properly read Watt of a bulb power?
0
Power consumption in watt for fluorescent lamps