MOSFET with load on source alternative

I'm pretty new to EE and I'm trying to use a sensor and saving battery as much as possible. I've already looked into similar topics (like this), but they are not satisfying me.

So, I want to power up sensor from time to time and get its output. Its regular capacitive soil moisture sensor, that's output voltage is dependent from moisture. The whole circuit is running on 3.3V. I was using n-MOSFET to power it like in the following schema: 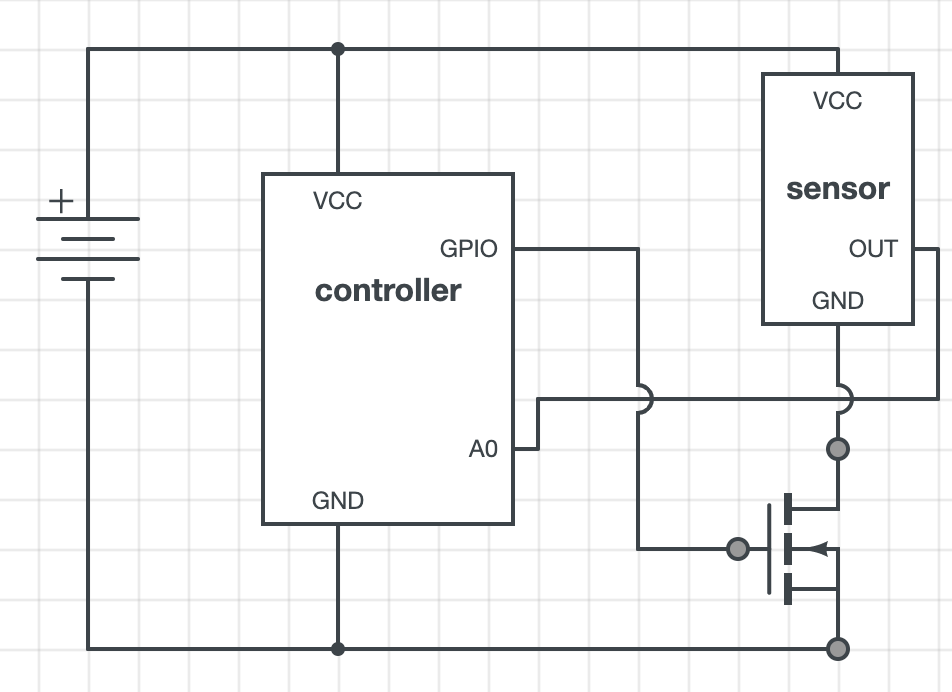 Problem is that this sensor does not require to be connected to the ground to work and consume energy (checked on few of them, all operated the same way), so I cannot power-up and power-down it with MOSFET. I was thinking that connecting it to source instead of drain, but I do not want to do it as it is n-MOSFET. Theoretically, p-MOSFET would solve my problem, but it will require to set controller GPIO on almost all of the time, which is what I want to avoid.

Another way would be to power up sensor directly from GPIO (sensor consumes around 5mA, while port can supply around 12), but GPIO voltage under load drops under 3V, which causes sensor output unpredictable.

So, question, do you know the way to achieve it? I was thinking about using a relay, but relays are usually much bigger than transistors.

batteries mosfet sensor
Share
Improve this question
asked May 12 '20 at 19:37

If I get the question, the idea is that the host will power off, and so take the GPIO down with it. And, you'd like to keep the sensor grounded.

An n-FET with a weak pull-up followed by a p-FET high-side would accomplish this. This would use zero power when the host is off - exactly what you're looking for.

A non-inverting buffer like an LVC1G125 can sink or source 32mA. This would also work.

Not the answer you're looking for? Browse other questions tagged batteries mosfet sensor or ask your own question.

3
Attaching Load to Source on Mosfet

1
Hacking an existing soil moisture sensor to use lower power supply
0
Using a MOSFET as a switch
2
How can I measure the current drawn by a soil hygrometer?
0
Power Mosfet cut out peripheral devices
1
Unexpectedly N-ch MOSFET high drain to source voltage in “on” state
4
Using MOSFET to turn on/off a sensor controlled by ESP8266
3
Ultra low power arduino wireless sensor : care of battery discharge
1
Calibrating a capacitive moisture sensor
0
Normally open capacitive sensor with MOSFET is closing relay, how can I make it open?
0
ESP32 grilled with simple MOSFET switch for 12V water pump