re model of transistor

In which case shall I consider output resistance(ro)?

I found that in case of re model for common emitter configuration we are considering output resistance(ro) but there is no (ro) in emitter follower configuration which is confusing me.If the output characteristics of both CE and CC configurations are similar then why different re models?

Shall I consider (ro) while solving numericals or can I neglect it as it's value is very high?

but there is no (ro) in emitter follower configuration

That is not true!

Here is the small signal equivalent model of a common collector (or emitter follower): 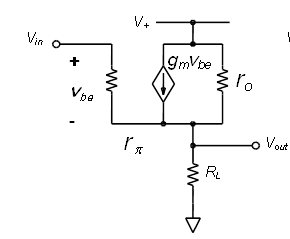 This picture was found here.

You would be correct in the sense that the influence of \$r_O\$ is much less if we compare the influence that the same value \$r_O\$ would have in a common emitter circuit: 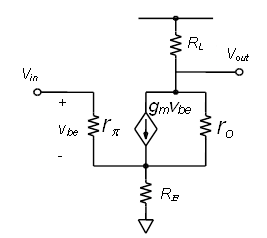 This is not immediately obvious from the circuit itself but becomes clear when we determine the output impedance of these amplifiers.

The output impedance of the common collector is around 1/gm which is usually a much smaller value than \$r_O\$. So in most cases, we can ignore the influence of \$r_O\$.

The output impedance of the common emitter is around \$R_L // r_O\$ so when \$R_L\$ has a value that is in a similar order of magnitude as \$r_O\$ or higher, then the output impedance is mainly determined by \$r_O\$ and we cannot ignore it.

then why different re models

The models aren't different, the small signal model of the bipolar transistor stays the same. But the influence of the components in the model changes when you use the transistor in different configurations (CE, CC or CB).

Not the answer you're looking for? Browse other questions tagged circuit-analysis ac bjt emitter-follower small-signal or ask your own question.

3
Inconsistency in the calculation of the gain of an emitter follower
3
Horowitz's exercise 2.2
2
Base resistance in Tee Model
0
How to differ output & input resistance of small-signal model BJT?
1
Feedback MOSFET circuit anaylsis
0
BJT AC Analysis using r_e model
0
Design an emitter-follower amplifier with bjt
0
How input resistance related to better amplification in transistor circuit
0
Manually calculated -3dB cut off frequency differs from the simulated value
0
Why does a Common Base amplifier gives non inverting output?