Is this internal rearrangement of charges in a circuit a current and is this current different from the “normal” current of the circuit? 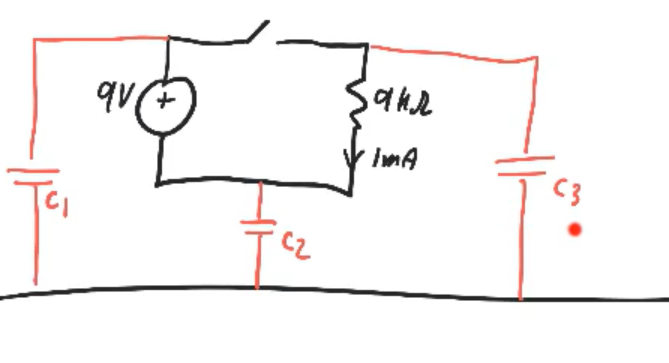 In the figure, the circuit is physically isolated from Earth (The black line at the bottom). The red capacitors are parasitic capacitors.

Under switching conditions the node voltages relative to the zero reference swing in such a way that the internal charge in the circuit stays the same. This is understandable because the circuit is isolated from ground and cannot get more charge or lose any charge. So the charges internally rearrange themselves in a way that leads to the node voltages being what they are.

How is this possible. Is this internal rearrangement of the charges a current? Is this current different from the “normal” current of the circuit (The 1mA)?

Is this internal rearrangement of the charges a current?

If so then is this current different from the “normal” current of the circuit (The 1mA)?

It's a transient current (it falls to zero over time) where the "normal" current in this circuit will continue forever.

If your voltage source has internal resistance (like all real-world voltage source) then the extra current required to charge the parasitic capacitors will cause the source output voltage to drop, reducing the current through the 9 kohm resistor.

This effect will last for only a few nanoseconds or microseconds, until the capacitors are charged, and after that the presence of the parasitic capacitors will not affect the current through the resistor.

Note that in the model drawn, only C3 has its voltage changed when the switch is closed, so only C3 will draw current. The other capacitors won't cause any currents in response to the switch closing or opening.

I'm going to focus on your general question(s) and ignore your specific circuit. I think you only included it to put something down, anyway. There's an underlying question and that's what I'll address.

There is a state that exists before and a state that exists after a source is applied to a circuit. Obviously, there must be a short period in between these two steady state conditions where the circuit transitions between them. This transition period is very fast and most undergrad electronics books don't directly address the physics involved. (But the physics details of this transition period is important to high voltage engineering, for example.)

It's not too complicated to imagine what happens, though. At first, the source will have an excess of positive charges at one node and an excess of negative charges at the other node. These will very, very rapidly impel charges to move (the conductors have a veritable sea of available, conduction band electrons.) These charge motions are, in fact, currents. But many of them are just initial currents needed in order to set up surface charges, leading to a gradient of charge distributions, throughout the circuit. For DC circuits, once these surface charges have been set up, the current required to set them up is no longer required. But these surface charges now act to impel the currents in all the right directions (this way, and that way, at node intersections, etc.) For AC circuits, these surface charge changes are continually changing but they are almost always extremely fast compared to the AC circuit oscillations. So for mental visualization purposes you can just think of each of the infinite number of continuous changes in an AC cycle as being a DC-snapshot. So the DC view is usually sufficient to get the point across.

Imagine bending a wire while a circuit is operating! How is it that the electrons moving along the wire "know" to take the bend? Do they bounce off of things and careen around the bend? No, they don't. Not generally, anyway. What instead happens is that a few of the moving charges will "get stuck" in the surface area of the outside curve of the bend in the wire. This slight excess of charge will be "just enough" to act as a repulsing force that causes the current to accelerate around the bend, as if they just knew to take it.

With that in hand, I recommend that you read a few references. Perhaps a better one I wrote is here. Another is here and only discusses a simple DC battery and one resistor. There's a good video, Surface Charge on a High Voltage Circuit, too. And finally, there's a quantitative discussion: Magnitudes of surface charge distributions associated with electric current flow by Dr. Rosser.

Not the answer you're looking for? Browse other questions tagged capacitor current grounding parasitic-capacitance or ask your own question.

-3
What effect does the internal re-arrangement of charges have on the existing current?
1
Voltage relativity
0
How can an electron have 0 electric potential after exiting a resistor but have current?

16
Grounding and why charge leakage occurs
3
A question about electrons, charges and current
0
Does the Resistor have an impact to the electric charge of the capacitors?
0
How is a capacitor in series with a resistor and capacitor in parallel calculated?
2
Why do charges not lose potential as they travel through the circuit before reaching a resistor?