Swapped the analog output regulator for an AZ1117-EH based on Peter Smith's suggestion, removed C1306, so now the 3.3VA output should be ok at least based on the datasheet. However, no significant improvement. See scope shots and discussion under the section market NEW MAY 20TH.

More scope shots below, which do seem to be telling a story. See discussion marked NEW.

UPDATE: tried adding resistors to the DAC output which had some effect, see below.

EDIT: tested the dielectric absorption theory: not the culprit (see below).

I'm multiplexing a 4 channel 16 -bit DAC to 21 output channels via DG4052 multiplexers (exact part numbers and links to the datasheets below). There's a 10nF hold capacitor after the multiplexer, with the output going to the + -input of a TL074 opamp.

The relevant part of the multiplexer schematic: 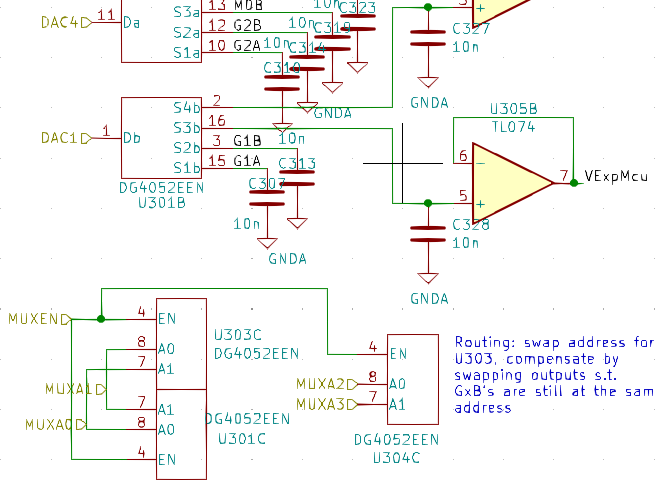 updated and the DAC output schematic (though note below about adding a resistor in series):

The DACn channels come directly from the DAC outputs (but see below for a test with a resistor in between), and are in the range 0..3.3V. Update rate is 3kHz, and the charge time is about \$\mathrm{40\mu s}\$

The problem: The output of a channel, take for example VExpMCU, glitches by about 1.2mV when the enable toggles, and the address of the corresponding channel is selected. In the picture, the yellow trace is VExpMcu, AC coupled, and the blue trace is the MUX enable (which is inverting). The output value is held constant, so the ideal result would be a flat horizontal line: 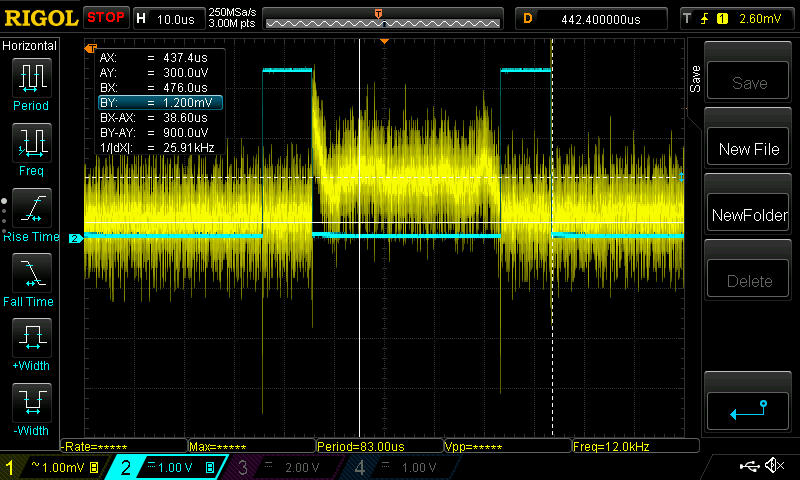 As a test, I added a 270\$\Omega\$ resistor between the DAC1 output and the MUX input. The result was that the glitch level about halved, but the initial transient is still about the same as before. Note the different time scale, and also the cursors showing that the step is now smaller, at about 660\$\mathrm{\mu V}\$: 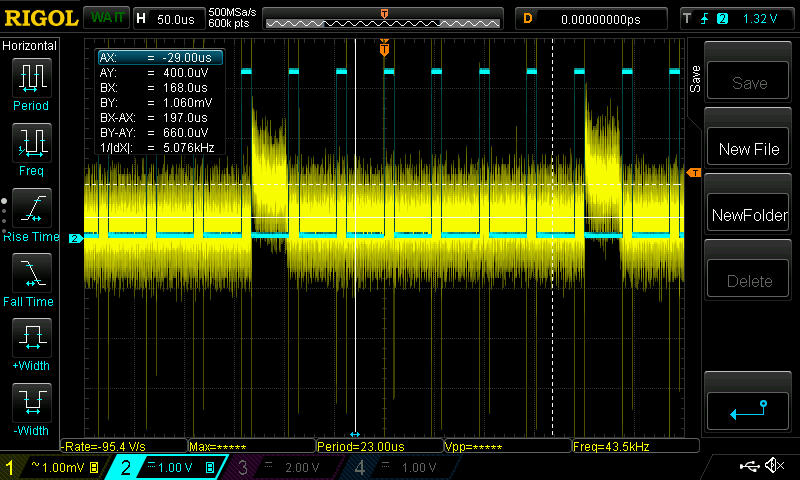 Interestingly, increasing the resistor to \$1\mathrm{k\Omega}\$ (sorry about the really bad picture here, vertical scale is 1mV/div) about further halved the step, but the initial glitch size remains about the same, with a much longer settling time. This suggests it may nonetheless be something similar to what Andy aka suggested, but there's still a downward step when the enable turns off, which means that somehow the hold cap immediately loses some charge: 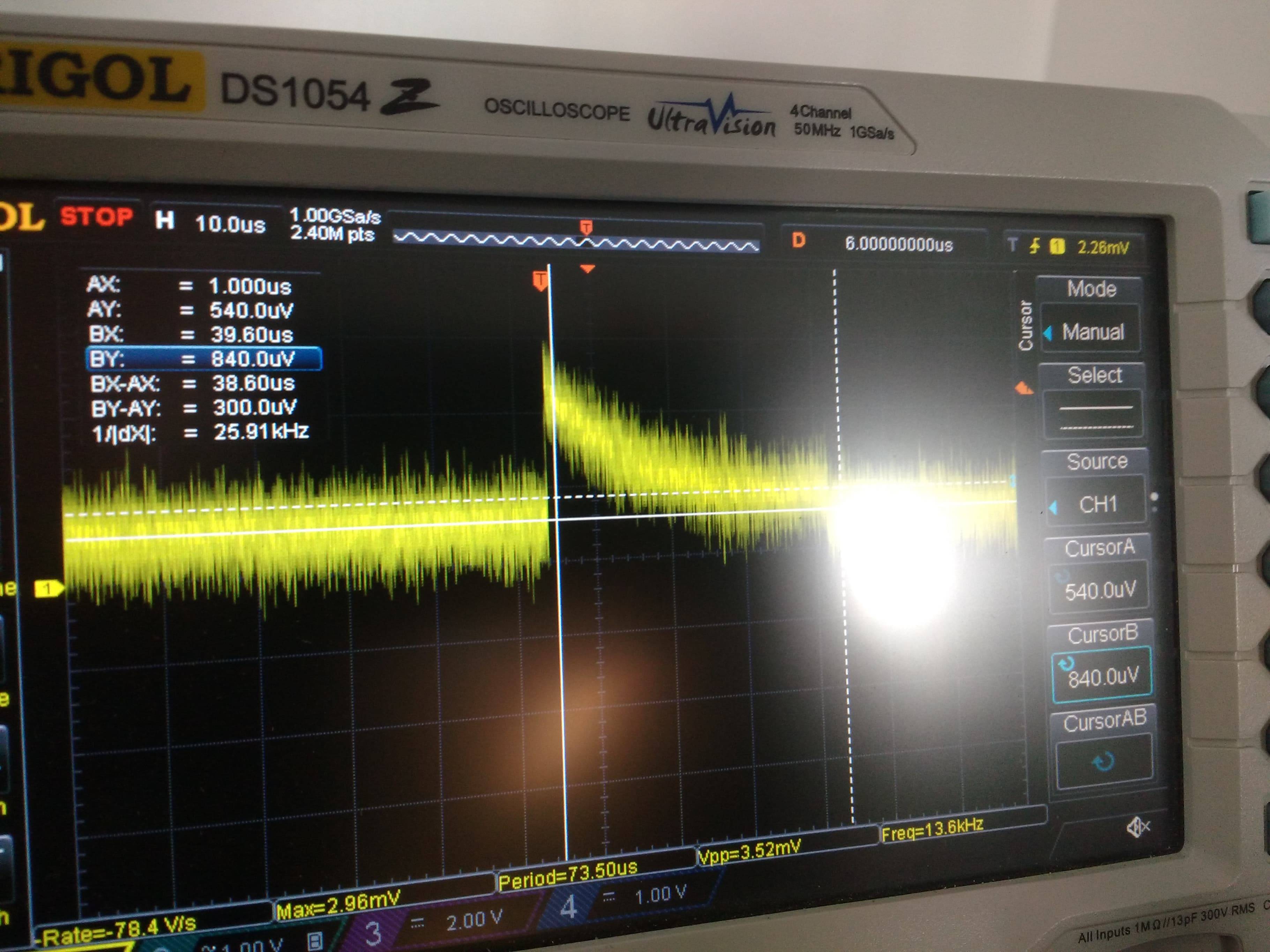 NEW on May 18th: Setting all the channels to the same output value (so the DAC output would ideally be constant, and it's easy to scope slight glitches there) gives the following scope shot, yellow is enable (active low), blue is directly the DAC output: 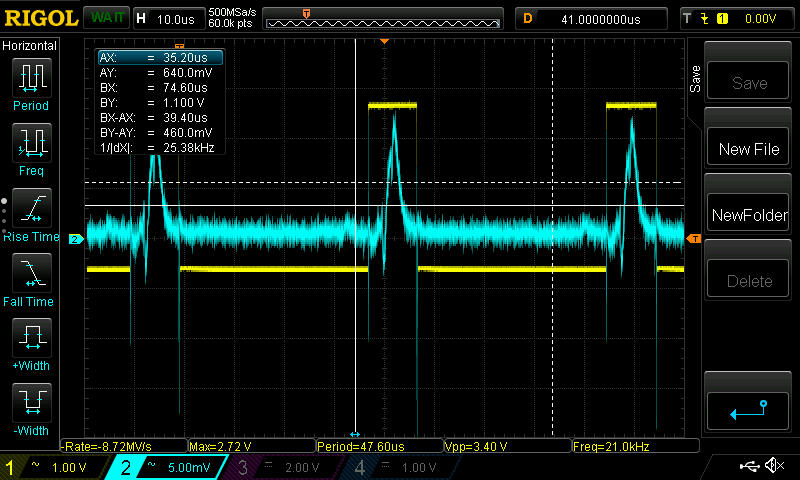 The big glitch happens while enable is off, so it's irrelevant here. However, there seems to be something on the rising/falling edges. Zooming in on the glitches near the enable signal edges: 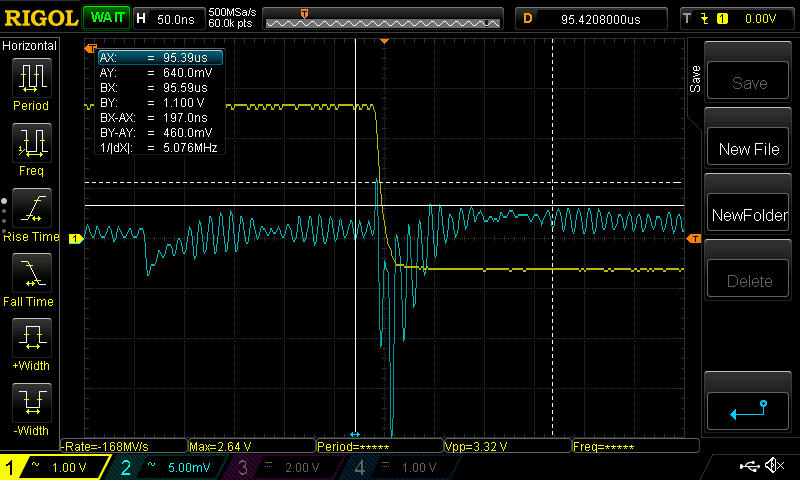 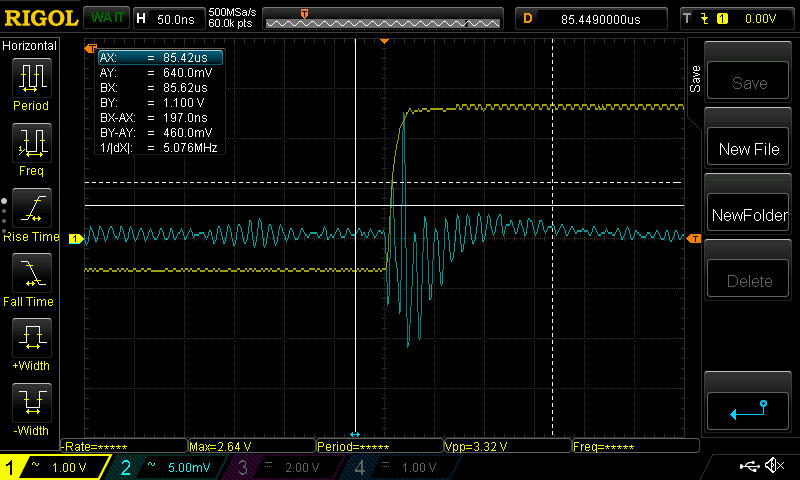 Then a scope shot of the power supply, yellow is still enable, blue is now the 3.3V analog power (AC coupled) measured at C1407: 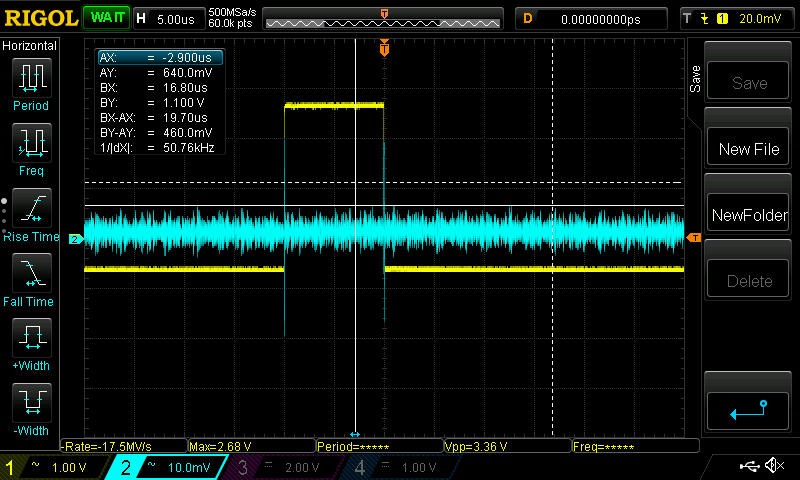 which seems to tell us everything: the analog supply sags when the enable toggles, causing the DAC output to glitch, which causes the glitch in the mux output. However, one more scope shot throws a wrench in the works: triggering the scope from the DAC output glitch (the big one that happens while the enable is off) gives the following (Blue is DAC output, yellow is 3.3V analog at C1407): 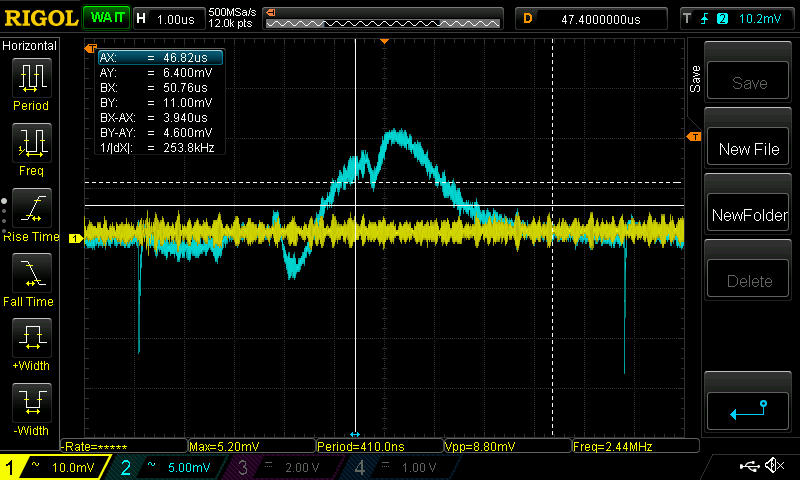 Note the absence of the supply glitch. Basically, the scope shots of the 3.3V line are inconsistent, so one of them is wrong. So now I'm thoroughly confused.

So how do I check if the problem in the supply is real or a scope artifact? If it's real, how to fix it? There's over 50\$\mathrm{\mu F}\$ of capacitors on the power rail, so just throwing more won't help unless it's a lot more. Here's the power section of the board, in case that tells us something (EDIT: regulator has since been swapped):

Swapped the analog regulator for an AZ1117-EH, which shouldn't have problems with the 100n caps (removed C1306 which was too close, though). The glitch on the supply still persists, it's now actually a bit bigger though more symmetric: 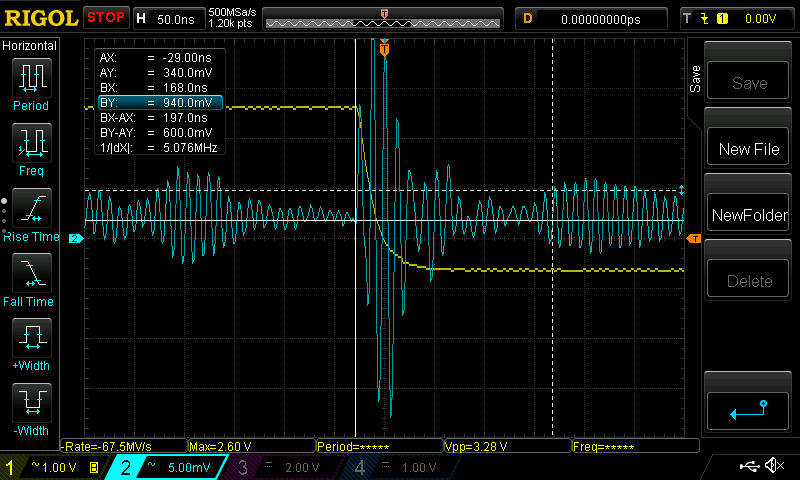 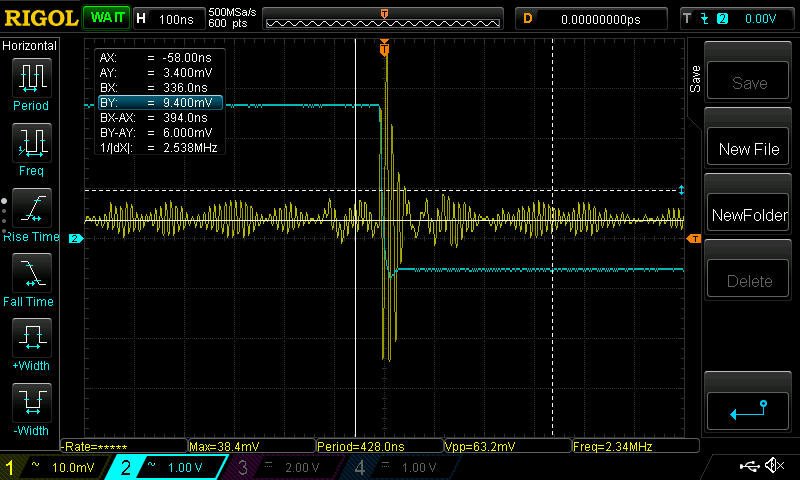 This is making me think that the glitch on the power rail may be an artifact of my scope grounding, somehow leaking from the neighbouring channel when I'm triggering on the enable (I also tried to use channels 1 and 4 on the scope, just in case, no difference). However, it's always there on the DAC output, so that's probably real.

EDIT: Here's the list of potential sources for glitches which I originally considered, most of these appear somewhat irrelevant now in light of the new pictures: 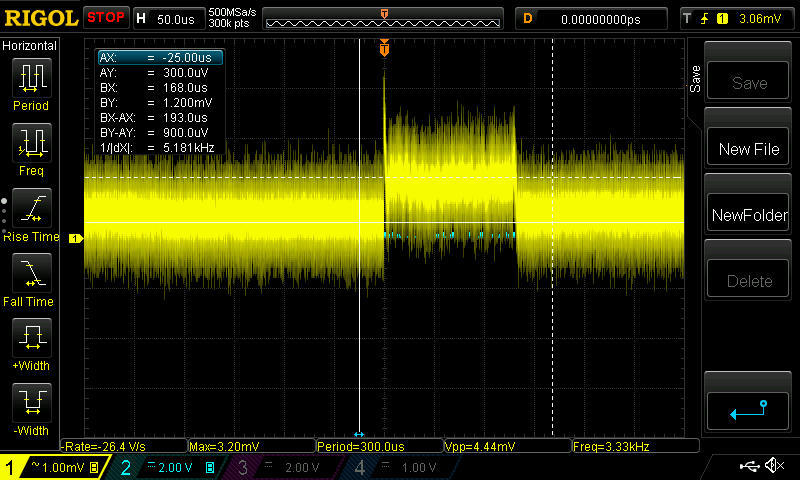 Update: also tried to add a 10k resistor from DAC output to ground, as suggested by PeterSmith. No change.

Summary this far: the only change that has had an effect was adding a series resistor after the DAC. Interestingly, doubling the hold cap had no effect either, which means that the step at the end of the charge period is not a fixed amount of charge being drawn from the hold cap, but a fixed voltage step. However, the glitch seems to be present already at the DAC output, and there's something fishy about the power rails, see discussion above.

The promised part numbers and datasheets (don't hesitate to ask for more info, if you need):

The problem could well be at the 3.3V regulators:

I have circled the output capacitors; the LM1117 datasheet states:

A ceramic capacitor will very probably be below this minimum value and the actual minimum value depends on load and input voltage which will vary across those conditions. A load step (which does not need to be very much) can cause instability at the output which would explain a great deal.

In addition to that, the output capacitance of the 3.3V digital rail does not appear to be sufficient (10\$\mu\$F minimum).

Whether you actually see that instability is going to depend on many things and even attaching a scope probe to the power rail will change those conditions, so it may do one thing without the probe and something different when you do probe the power rail.

The usual way of dealing with this sort of issue is to either use a standard tantalum (not the low esr series) which typically have an esr in the required range (although there are other problems with tantalums) or to use a ceramic in series with a low value resistor on the output.

Where there are low esr local decouplers, they can sometimes be isolated by using a small inductor or ferrite on the output (we are trying to prevent instability caused by transients). If the devices are far enough away such that track inductance effectively isolates them from the output of the regulator then that may not be required.

Sometimes, low esr local decouplers simply cannot be used (I have had this specific problem in the past) and the output capacitance on the regulator has to be relied upon for transient response.

The output ESR issue for older LDO devices is well known and many newer parts do not have this problem.

There's a 10nF hold capacitor after the multiplexer

Another possible source might be made worse by a slow refresh time. For instance, the input bias current for the TL074 could be around 1 nA and using the capacitor equation below: -

We find that the rate of change of voltage on the 10 nF capacitor is 100 mV per second.

I'm not saying this is the culprit of course but, it's something to look into.

The DG4052 has an "off" leakage current of typically up to 1 nA and this may make the issue doubly worse.

There's also the problem of maximum capacitive load as specified in the data sheet: -

I suggest you look into charge injection. The edges of the hold signal are capacitively coupled to the output, resulting in a step change in the output when feeding a cap.

The quick test is to change the value of the buffer cap, and see what happens to your step size. If it's charge injection, a smaller cap will give a larger step, and vice-versa.

Not the answer you're looking for? Browse other questions tagged multiplexer dac sample-and-hold or ask your own question.

106
Are tantalum capacitors safe for use in new designs?