Here's my circuit:
(now without voltages)

It uses two EL34s biased to -30V (fixed bias). Here's the loadline (made with this calculator): 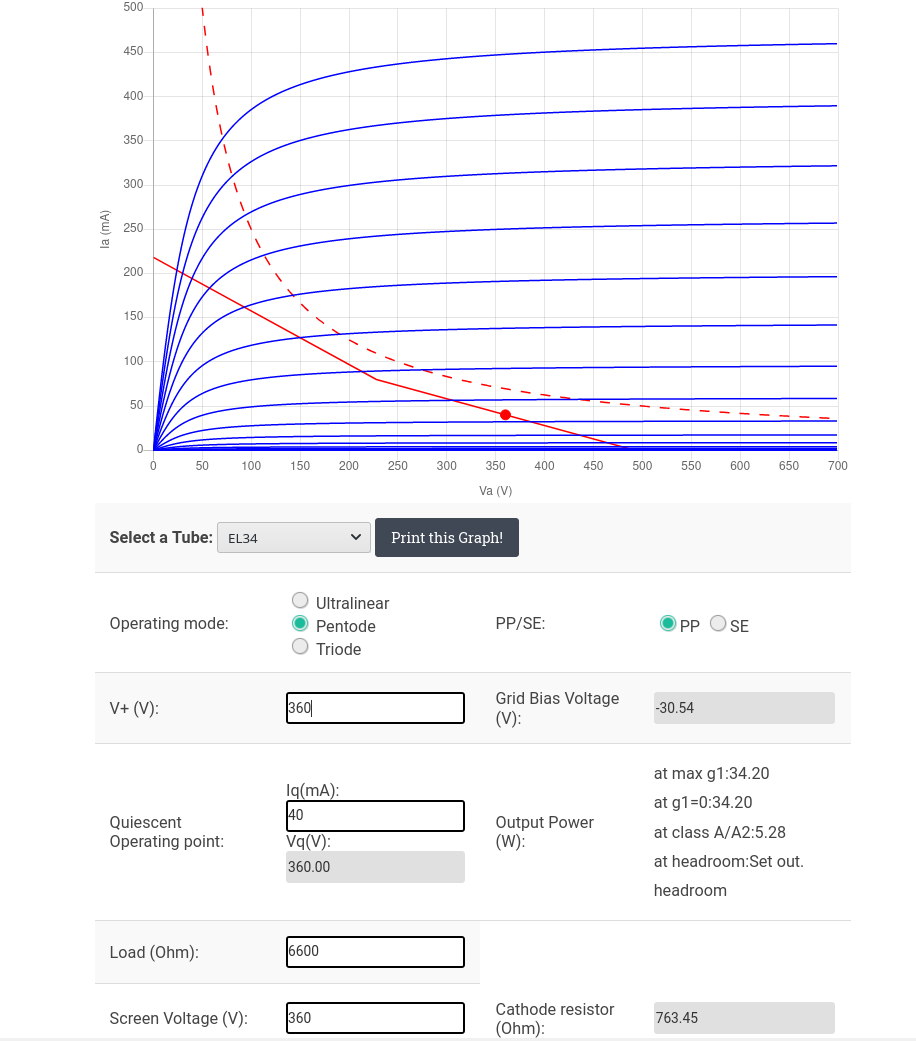 When no signal is applied voltage on EL34 anodes is 360V, as expected, and current is around 40mA, as expected. However when I apply 50V p-p signal (V8 and V9 are generating phase inverted signals), weird things start to happen: 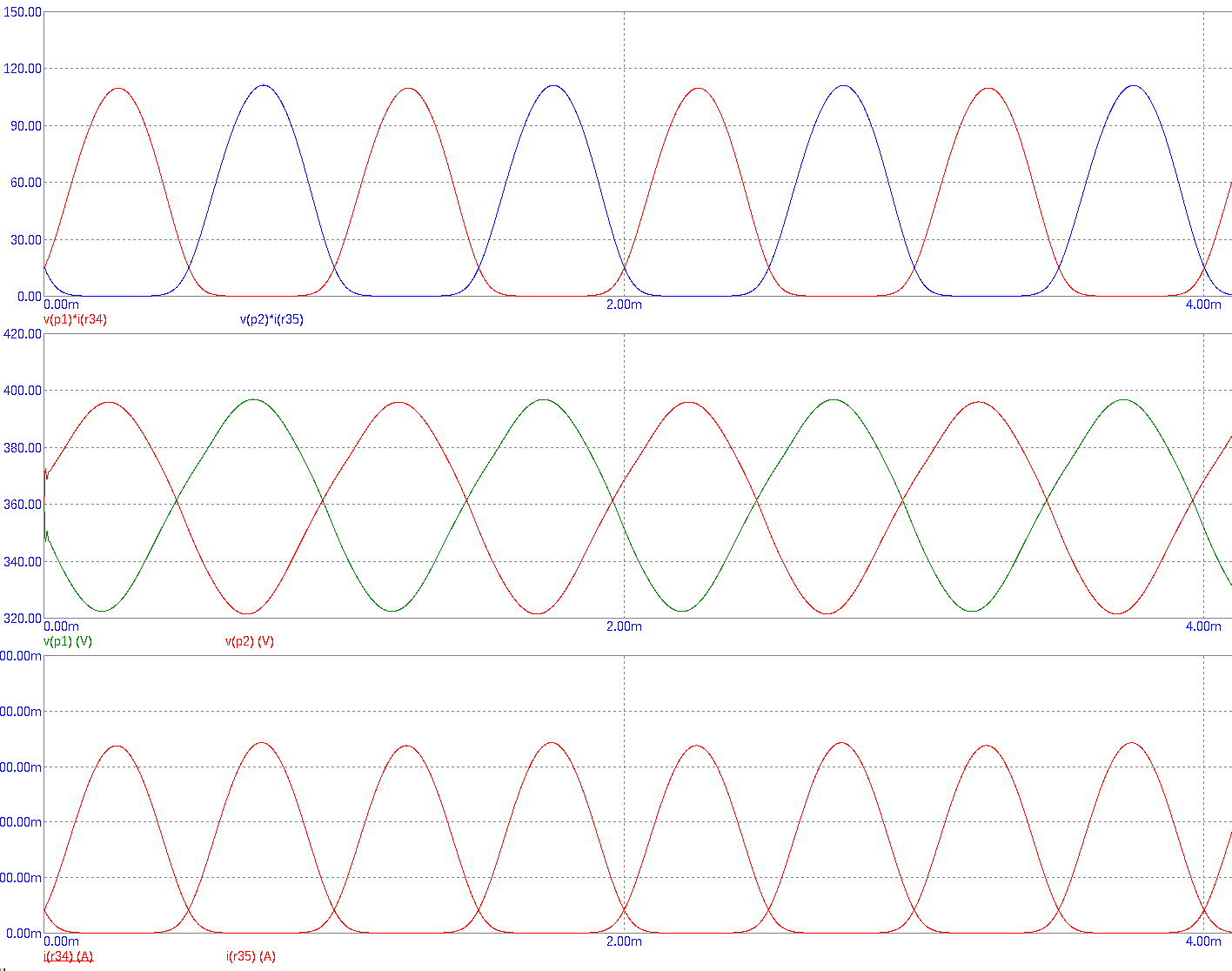 Power dissipation on EL34 anodes is going up to 110W. Signals on EL34 grids are correct.

[AFTER EDIT, corrected inductances]
I'm running this simulation in Micro-Cap 12. I suspect that something is wrong with transformer. Speaker transformer is Hammond 1650HA, and I've used component named 'centap' for transformer, and copied inducance values from 1650HA's datasheet. (11.3H primary, which results in 2.825 to center tap, and 214.5mH for secondary 8 Ohm output). 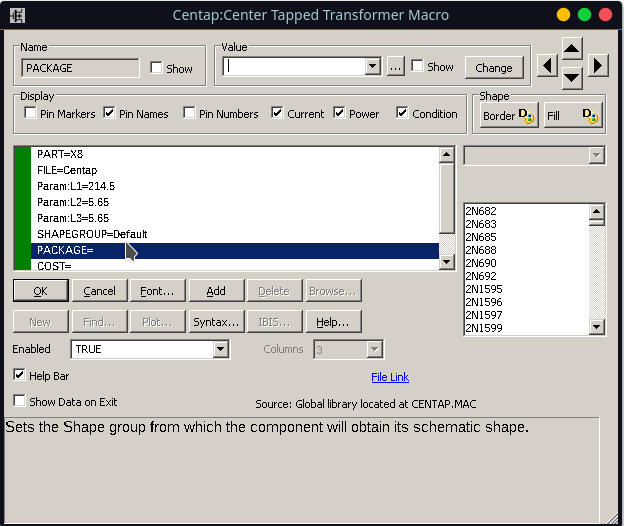 (Inductance values are now corrected, thanks for pointing it out)

Loadline was generated with transformer primary impedance of 6.6k Ohm. Datasheet says that primary impedance is 6.6k, and secondary has three outputs for 4,8 and 16. There was nothing about impedance when I was defining transformer in micro-cap. Since only values that I could specify were inducances, I thought that setting proper inductances implies that all other values are also correct. However when I plot impedance of transformer, I see that these values have nothing to do with 6.6k (or 3.3k each) 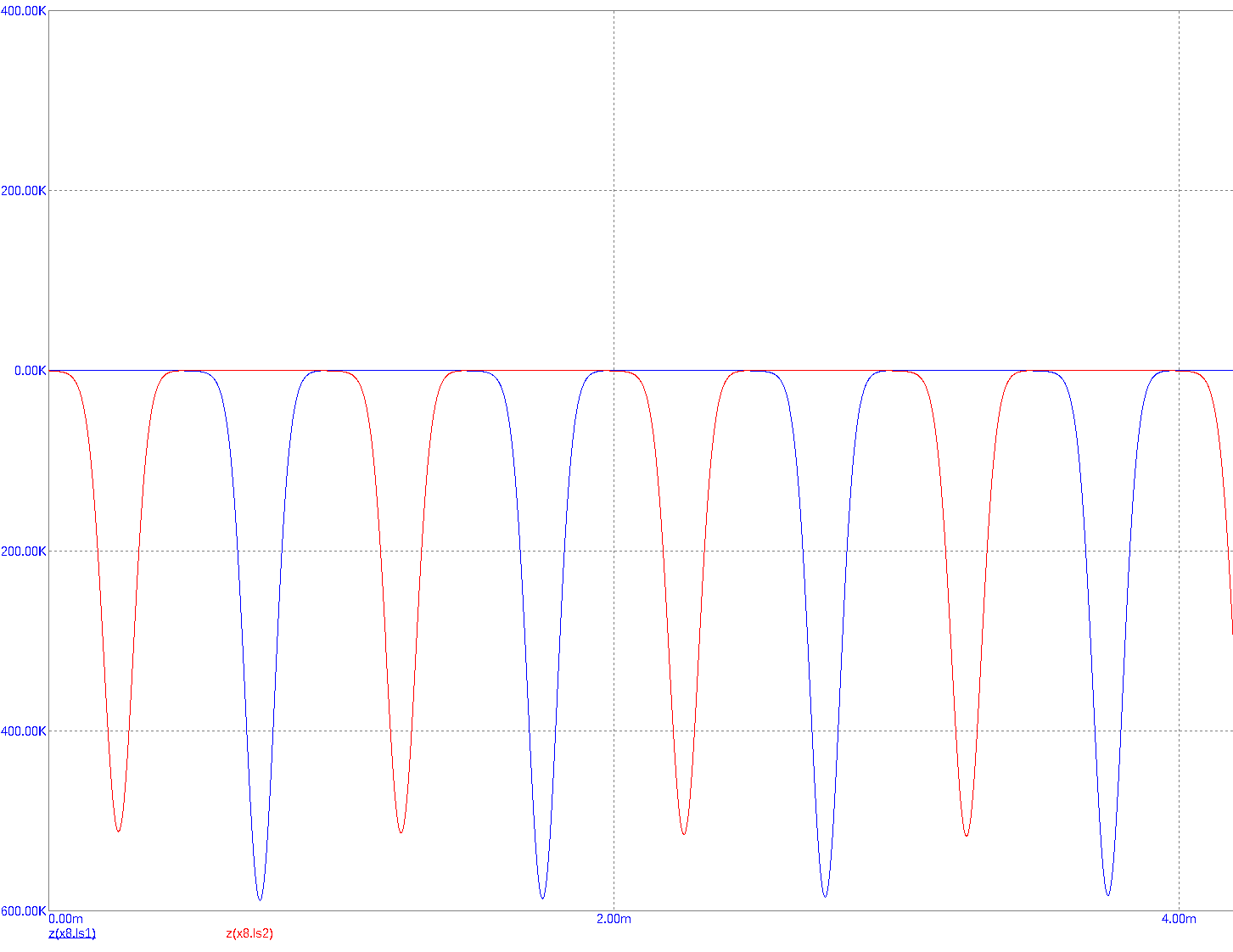 The question is: is something wrong with my circuit, or it's just issue with the software? In case it's issue with software, could anyone who has experience with micro-cap 12 tell me how to properly simulate Hammond 1650HA in this software?

EDIT: This circuit is using the same transformer, and is almost identical(in fact when I modified my circuit to be exactly identical I'm still getting wrong results). It's author build it and it worked for him, his EL34s didn't melt or explode, so I think my circuit is also correct, and therefore I think there are two possibilities: 1. I've implemented 1650HA incorrectly 2. I've measured power incorrectly.

EDIT 2: Since impedance of transformer should be 3.3k for each side, I've replaced it with 3.3k resistors, and now I'm getting correct power measurements, power dissipated on EL34s is slightly below 20W, and average power on load is ~32W.

For one thing, you've modeled the transformer incorrectly. If the total primary inductance is 11.3 H, then the inductance of each half is 2.825 H — 1/4 of the total, not 1/2. Remember, all other things kept equal, inductance is proportional to N2 — the number of turns squared. Since each half of the winding has half the turns, it has 1/4 the inductance. The rule about inductances in series simply adding only applies when their fields are not coupled.

Fixing this will greatly increase the coupling to the load. Note that the power that you are currently measuring is almost purely reactive — the current peaks are aligned with the points where the voltage across the transformer is zero. The real power being coupled to the load is negligible in proportion.

Also, it appears that you've specified the secondary inductance as 214.5 H, not mH.

Now that you've fixed the issues mentioned above, I believe there are still problems with the values you're using. Where did you come up with those inductance vallues? I can't find any mention of inductance in any of the Hammond data.

The high (measured) values for secondary inductance listed in the datasheet are the result of second-order effects such as leakage inductance (imperfect coupling), which appears in series with the secondary terminals.

Not the answer you're looking for? Browse other questions tagged amplifier simulation vacuum-tube push-pull or ask your own question.