Can the voltage drop of an LED driven at a constant current be higher than the supply voltage?

So I've been working on a constant current LED driver project, and I've run into a weird situation. I'm driving 3 parallel rows of 8 LEDs in series (Luxeon 2835 color, green) using a Sparkfun picobuck with an AL8805 in it, configured to supply 330mA. The input voltage is a 24V power supply. According to the datasheet for the LEDs I'm using, at 110mA, the voltage drop across a single LED should be ~3.1V. Since I am driving 3 parallel rows of 8 in series at 330mA, the combined voltage drop of the series LEDs should be 3.1 x 8 = 24.8V, which is higher than the input voltage. However, if I measure the drop across the LEDs with my multimeter, I get 24V, and if I measure the current, I get 330mA. The LEDs appear to light up fine.

Can someone explain what's going on here? How can the LEDs draw more current than the voltage drop across them in series should allow?

Can someone explain what's going on here? How can the LEDs draw more current than the voltage drop across them in series should allow? 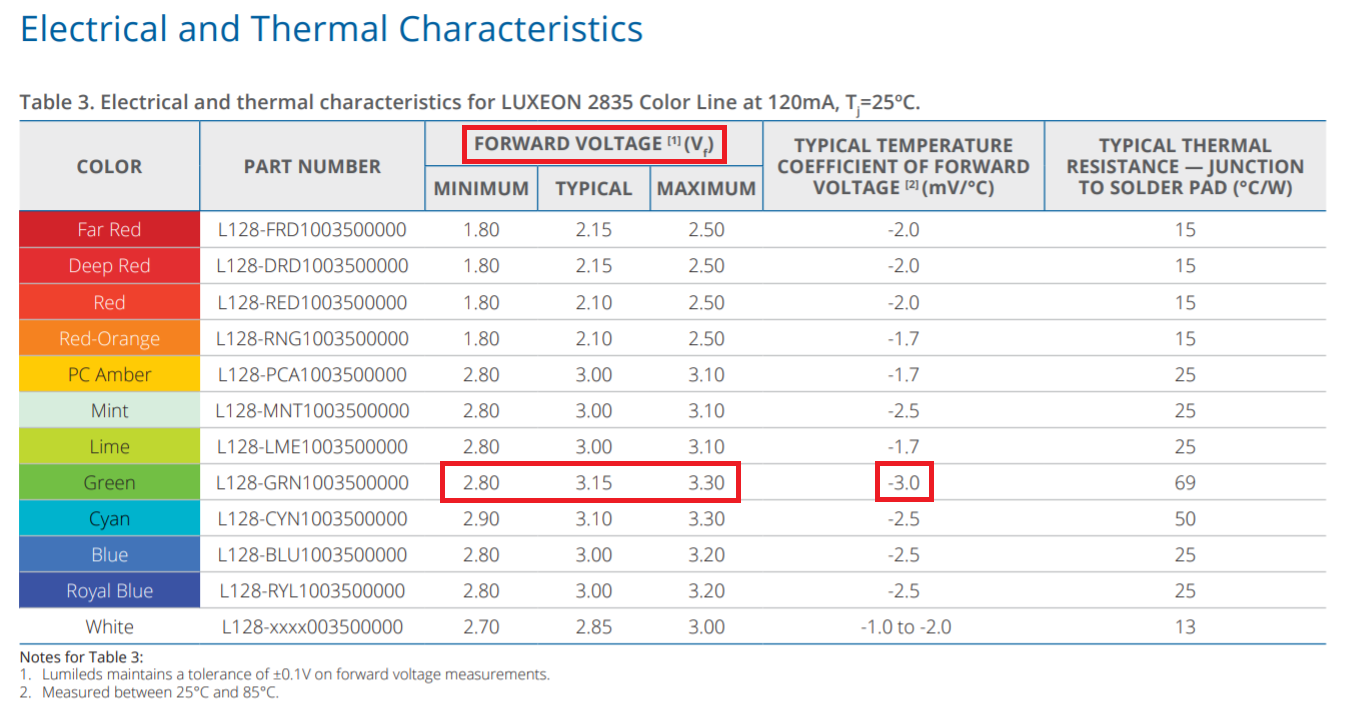 Each LED with typically (say) 3 volts across it and (say) passing 110 mA dissipates a power of 330 mW. For the green LED it will warm at a rate of 69 degC per watt hence, it will warm from an ambient temperature of (say) 25 degC to 48 degC.

As the local ambient rises around each LED (due to this heat being dissipated) this causes the forward volt-drop to fall at 3 mV / degC.

So, making an estimate of the total LED temperature rise being 50 degC, the forward volt drop will fall from typically 3.15 volts to 3.00 volts. But, there's nothing to say that all your LEDs are bang-on middle-of-the-road typical and, the batch you received may indeed have a forward volt drop of closer to 2.80 volts.

In other words, it's not beyond any stretch of the imagination that the volt drop you see across each LED is below 3 volts - theoretically it might begin (when cold) at 2.80 volts and drop to 2.65 volts when fully warm.

Otherwise consider the tolerances due to internal bulk resistance of the LED from 2.8 to 3.3V @ 120 mA 25'C

Lesson Learnt: Always mistrust your assumptions or Trust but Verify.

The constant current driver will always output the voltage required to maintain 330mA. This voltage can be lower (or higher) than the typical voltage indicated in the LED datasheet.

Not the answer you're looking for? Browse other questions tagged led led-driver constant-current voltage-drop or ask your own question.