I read that a JFET cascode amplifier has a reduced input capacitance thus lowering the Miller capacitance and will obtain wider bandwidth.

I only notice that the signal is directly-coupled to the lower JFET while the upper JEFT has its gate in AC ground. But I cannot understand how was that suppose to lower voltage gain (Miller capacitance) 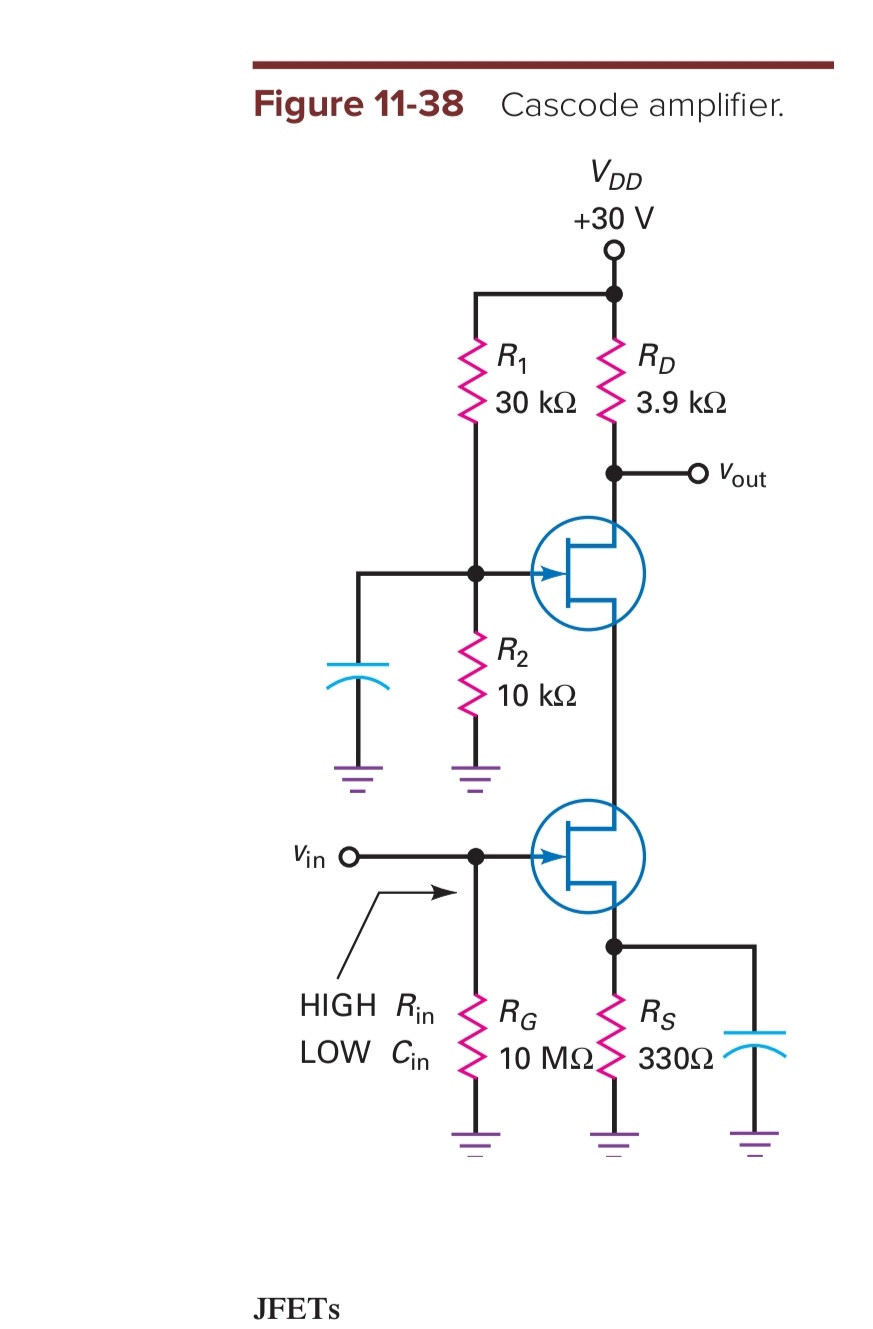 Let's say I disregarded the upper JFET and applied a fixed DC bias of 10 volts to the lower JFET's drain as per this diagram: - 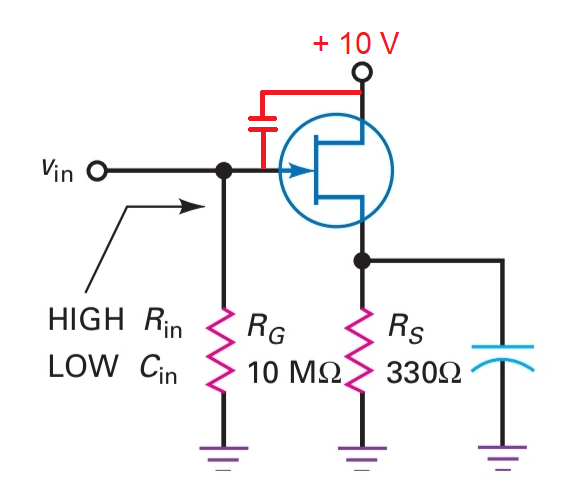 Although it isn't a voltage amplifier any more, can you see that that the miller capacitance (shown as a red capacitor above) no longer has much of an effect? It still acts as a regular capacitor but instead of being connected to a (drain) node that is swinging about with the amplified input signal, it connects to a DC node?

Can you also see that the circuit still functions as a pretty phenomenal amplifier of current in that the input signal voltage still causes a significant AC signal current to be taken from the 10 volt source? Now consider the upper transistor circuit: - 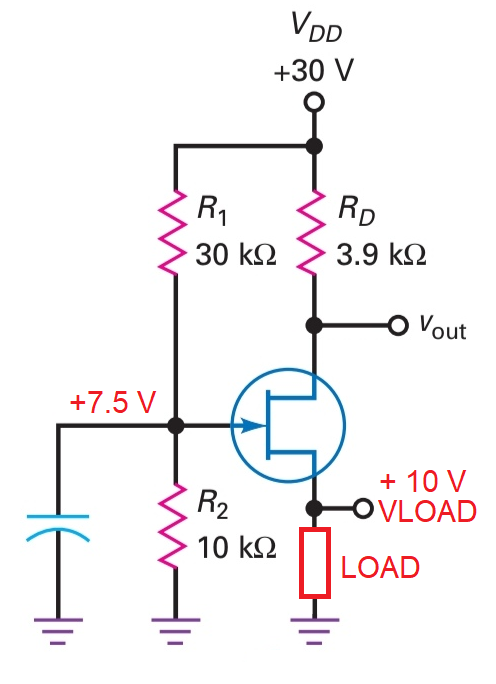 I've disregarded the lower transistor and replaced its circuit with a red resistor called \$\color{red}{\text{LOAD}}\$. Can you see that if \$\color{red}{\text{LOAD}}\$ varies, despite this variation, the voltage at the source of the JFET will remain fairly constant at + 10 volts. I've estimated 10 volts based on what I know about JFETs i.e. the gate will be 2 or 3 volts below the source for a typical bias arrangement.

However, now the upper JFET turns the AC signal current produced by the lower JFET back into an AC voltage at its drain hence, we get regular voltage amplification. And, it should be noted that the upper JFET doesn't suffer from its own miller capacitance effects because, its gate has a capacitor to ground that ensures that AC signal variations are decoupled to ground.

Suppose the 2 fets have a transconductance of 1/39 ohms. and a C_gate_drain of 10pF.

This 1mA interacts with Rin_source of the upper fet; Rin(common_gate) also == 1/39 ohms, and you see 39mv on the node between the two fets.

The 1 mA small signal current continues on thru the upper fet.

What is the input capacity of the bottom fet? The C_g_d has 39mv on each of gate and drain, but these are out of phase; being out-of-phase, the voltage doubles, thus both the gate and the drain must provide DOUBLE the current; the Cin is doubled to 20pf.

On other hand, the capacity burden (the charging current) of Vout on Vgate of the upper fet is 1010pF, and a large bypass capacitor in needed.

The cascode configuration (FET, BJT, tube…) is usually presented as a common-source amplifier (Q1) that drives by current a common-gate amplifier (Q2). At first glance, this connection does not make sense since the common-gate stage is designed to work as a voltage amplifier while here Q2 does not amplify... it only delivers the current. The other answers have explained why it is done this way. I will explain how this is done because it is not well explained in sources.

First of all, you have to have a clear idea what the problem is. Let's try to formulate it.

Virtual input capacitance. "Looking” at Q1 gate, the input voltage source "sees" two JFET capacitances in parallel - the gate-source Cgs and gate-drain Cgd. But in such a common-source configuration with a source resistor, they are not genuine capacitances since their other ends are not connected to the "stiff" ground but to "movable" points with varying voltage. As a result, the value of these capacitances are modified as follows:

Virtually increased Cgd. The right end of Cgd is connected to the drain voltage that is an inverted copy of the input voltage. The drain voltage is added to the input voltage so the voltage across and current through Cgs are increased... as though this capacitance is increased. This is the classic Miller effect that, in its utmost form, is known as "virtual ground". In some cases (e.g., op-amp inverting integrator) this effect is useful but here it is harmful; so we have to beat it. How do we do it?

1. Revealing the contradiction. Q1 drain voltage varies because of the drain resistor Rd... so we should remove (zero) Rd, e.g. simply connecting Q1 drain to Vcc or other constant voltage. But we want Q1 drain voltage to vary since this is the output voltage of this common-source amplifying stage... so we should not remove Rd... we need it. How do we then solve this contradiction? 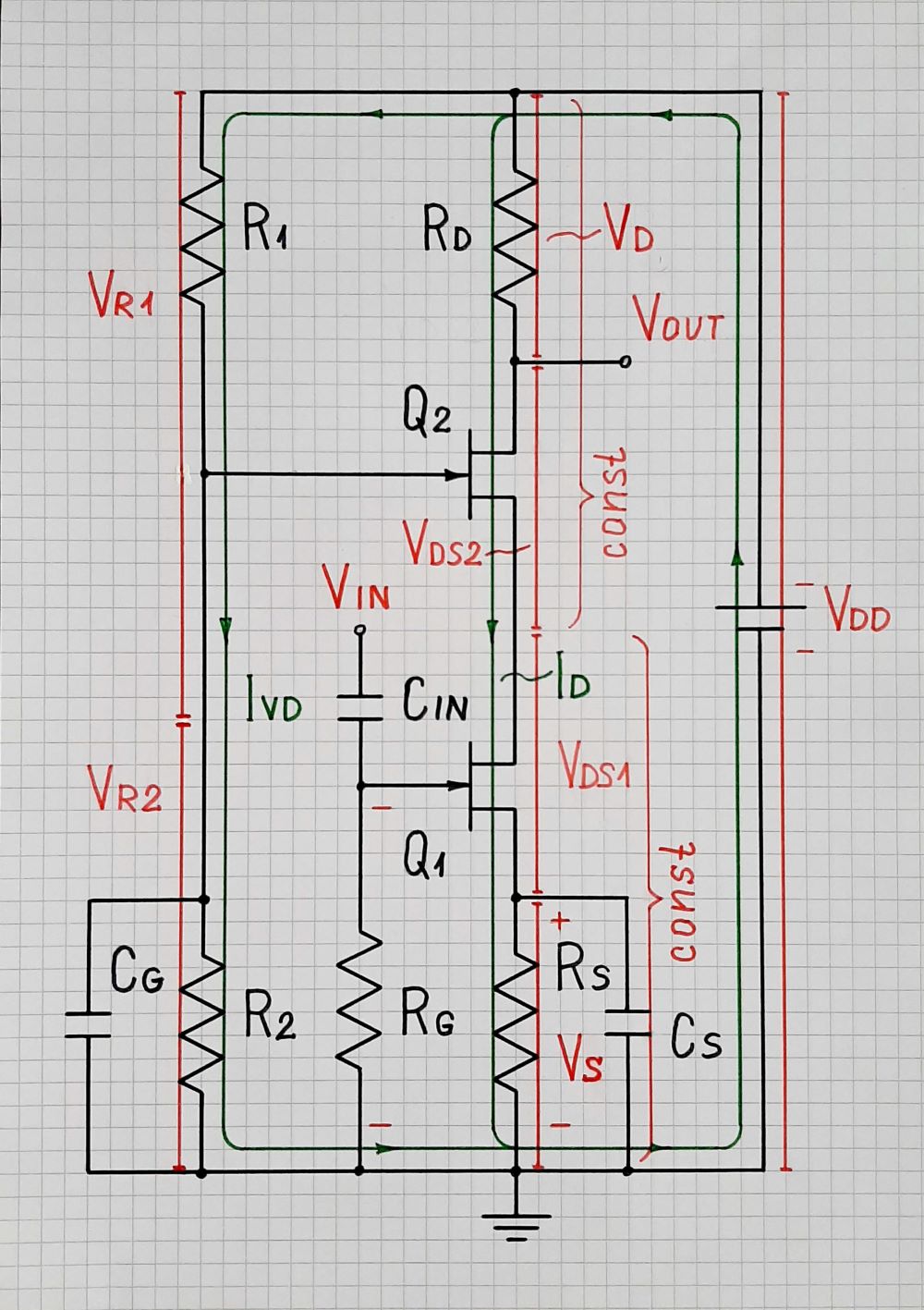 3. Implementation. This powerful idea is implemented in the ingenious cascode configuration by inserting an additional source follower (Q2) between Q1 and Rd. Q2 drain-source channel compensates the resistance Rd as follows.

5. Explanation. Q2 can be thought as of a negative feedback system with constant input (gate) voltage that keeps constant its output (source) voltage; so it acts as a voltage source. It does not need the resistance Rd; so let’s first remove it. Q1 can be thought as of another negative feedback system with varying input (gate) voltage that keeps constant its output (drain) current; so it acts as a current source. This combination of two heterogeneous sources connected to each other is “favorite” for both of them since the current source “sees” the almost zero differential resistance of the voltage source and the voltage source “sees” the almost infinite differential resistance of the current source. When one of them tries to change its quantity by changing its static resistance, the other “helps” it by changing its static resistance in the according direction - Fig. 2. So this is a system of two interacting (mutually “helping”) sources. The considered CS-CG cascode circuit is presented in Fig. 2b.

Fig. 2a. Voltage source driving a current source (an example is the common mode of the differential pair where two source followers in parallel drive a common current source)

For example, if the input voltage increases, Q1 decreases its static drain-source resistance to increase its drain current. This "pulls down" Q2 source voltage... Q2 "senses" this input disturbance and begins increasing its drain current until it becomes equal to the desired Q1 current. Thus Q1 current is delivered to Q2 drain and we have a current output.

But we need a voltage output; so let's put Rd back in its place. As a result, the common current decreases... but Q2 "senses" this change and immediately reacts by decreasing its static drain-source resistance. The total resistance Rd + Rds2 + Rds1 + Rs and accordingly, the current is restored.

So Rd is a disturbance for Q2 negative feedback system (voltage stabilizer)... but it is compensated by the system.

Not the answer you're looking for? Browse other questions tagged jfet cascode or ask your own question.

0
Having trouble designing a JFET input stage in a Multistage Transistor Amp
1
Increase low-frequency gain of a cascode amplifier
2
Increasing frequency response instead of gain for a Cascode circuit
4
Importance of Source-Body Connection In MOSFET Cascode Amplifier
3
Biasing high frequency BJT cascode amplifier
0
(Lack of) Miller Effect in Cascode considering Common Emitter and Common Base Seperately
2
Implementing negative feedback on a JFET amplifier
0
Design a Cascode amplifier using suitable topology to meet the specifications( by Varying W/L ratio) . VDD is 3.3V
4
Why does the thermal noise of this large resistor not contribute to the input noise for this JFET-input inverting amplifier?