I'm trying to power up a Giderwell RGBCCT LED strip using ESP32 (a 3.3V microcontroller) with the help of an IRL540N MOSFET. 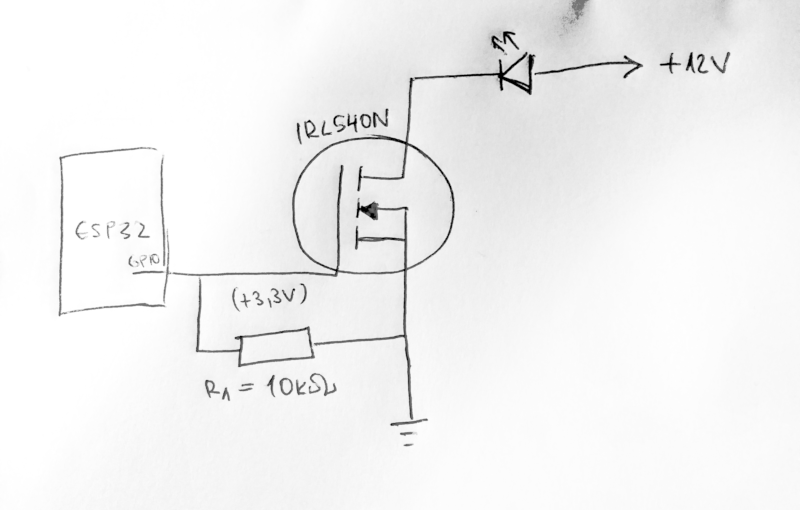 (sorry for the amateurish/nonstandard diagram, I'm not educated in EE)

R1 is a simple pull-down resistor to ensure the gate is low while the chip is powered off/booting. I actually have 5 MOSFETs driving 5 channels of an RGBCCT strip, but everything is the same if only one channel is powered.

My problem: When the gate is high and there is no load, I measure 12V across the drain and source terminals of the MOSFET (as expected). However, when the LED strip is connected, this voltage drops significantly, to 6-8V, depending on the MOSFET and channel I'm measuring. The LEDs are also much darker than when connected to +12V and GND directly.

This is a small segment of an LED strip containing 6 LEDs per channel, and by spec should peak at 300mA for the whole segment, so approx. 60mA per channel.

What could be causing this? I'm using a perfboard - is my soldering to blame? (It's pretty atrocious, this is my first soldering project.) Maybe I cooked the MOSFETs while soldering, causing them to not be able to deliver the current? Is the 3.3V logic level too low to fully activate the MOSFET? The datasheet suggests a max 2.0V threshold and ~10A of continuous current at 3.0V gate-to-source, which should be plenty. I might be missing another parameter though.

I measured the resistance from GND to the source pin on the MOSFET, and from the drain pin of the MOSFET to the cathode pad at the end of the strip, and it's around 0.3 ohm. If it matters, I used AWG 20 wire (0.5mm²) to connect everything, joined by soldering on the perfboard.

Update: I measured the drain-source resistance on the MOSFETs while their gates were high. Most of them have around ~20 ohms, give or take, while one has 3.9 ohms, but even across that one the voltage is ~9V, a 3V drop. For one with 25 ohms, the drop is 6V. I'm even more confused now as the resistances are different and the drops are not proportional to the resistance...

It's a bit surprising it's that bad, if the part is genuine. Measure Vgs directly at the MOSFET, from gate to source. If there is excessive resistance in the source circuit it could be taking away the already inadequate Vgs voltage.

Not the answer you're looking for? Browse other questions tagged microcontroller led mosfet led-strip voltage-drop or ask your own question.