I have a 48vdc to 120vac inverter with a 3 wire output (hot, neutral and ground). I installed a GFCI outlet using those output wires. I tried putting a resistor (I tested with 1k 100 and 22 ohm values) between the hot and ground but the outlet doesn't trip. Using the same resistor on another GCFI outlet connected to the grid, will trip the outlet. When I press the test button on the GFCI outlet connected to the inverter, the outlet will trip. The inverter ground is grounded. I get 120v from neutral to hot and 60v from neutral or hot to ground. It seems like the GCFI won't work if you were to make a circuit to ground. Any ideas of what is happening?

This tells me that the output is likely floating BUT loosely coupled to ground with EMI capacitors of a few 100 nF. Something like this: - 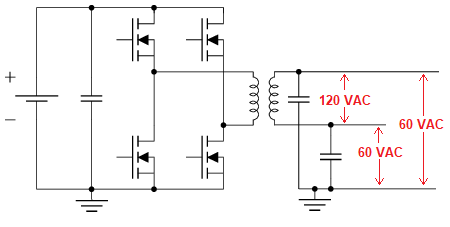 This means that a regular GFCI won't work because you are just not able to drag the current through the resistor. It's a bit like connecting a battery to ground via a 1 kohm resistor - no current will flow because you haven't made a DC circuit.

Your inverter's output is galvanically isolated from ground hence a single point connection from either hot or neutral to ground won't cause a significant current draw that would trip the GFCI.

Some (many?) small inverters (and Honda's "inverter" type generators) have a hot neutral.

Grounding the Neutral in this case will cause Bad Things to happen!

I don't know how a GFCI would react when faced with this sort of supply.

GFCI trips are only relevant when your supply has normal Neutral-Ground bonding back at the service.

So the normal way we do things, is, at precisely one point: the service point, there is an equipotential bond between neutral from supply/onward, and ground from the Grounding Electrode System/onward. The whole point of that exercise is to

That bond is called the Neutral-Ground Equipotential Bond due to that first function.

Your thing is not doing it that way, so I don't know what to tell you. Normally in a service installation, only hots+neutral are sourced from the power company. You bring your own ground. And you bond to neutral yourself.

So by that definition, your inverter is the supply from utility. You take only hot and neutral from it. You then locally derive safety ground from your ground rods or whatever. Then you bond neutral and ground at your service point.

My concern is, this could result in the chassis of the inverter (and the battery system powering it) to now become a bouncing ball, wildly floating as high as 170V+48V above earth. That means all of it would become a shock hazard.

Harper's law is that non-UL-listed Chinese cr*p does not ever touch AC mains. If I had to make it safe, I would have the inverter output into an isolation transformer, and put both inside a grounded metal box. Then I'd wire the service as above on the secondary side. 240V/480V-120/240V supply transformers are commonplace, and you could run one at half voltage (and half power) easily enough. Also if you ever upgrade your system, you could go 240V with the bigger system, and re-jumper the secondary for split-phase.

GFCIs work by sensing the imbalance between line and neutral. If the supply is floating (like it would be with an inverter), making a path to earth wont change the line/neutral currents with respect to each other, it will only shift the floating voltage around.

Tie inverter neutral to safety ground, before the GFCI, and test again. It should trip. 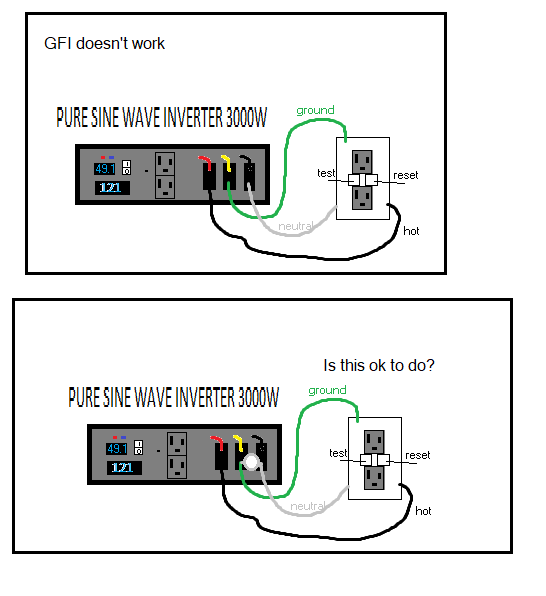 we do not recommend to connect the yellow wire with black one, it will make the inverter shell has the electricity.

Not the answer you're looking for? Browse other questions tagged solar-cell inverter gfci or ask your own question.

0
Using 3PDT Relay To Switch Grid and Inverter Output
3
Minimum current level to trip a GFCI
0
What happens if an inverter neutral is bonded to earth
2
Grounding and protecting 12V Inverter
1
Running an electric boiler from grid-connected PV solar panels
0
GFCI tripping when using hair trimmer, but only when using an extension cord