There are some ΔΣ ADCs of which one can set an input referred gain. Like if there was a PGA between the input and the ADC, but in fact, there seems to be no PGA between the ADC and the inputs but instead the gain is set inside of the ΔΣ modulator somehow.

For example this one form Analog Devices: https://www.analog.com/media/en/technical-documentation/data-sheets/2480fe.pdf

Am I right, that there is no amplifier between the input and the ADC here and the gain is set somehow in the modulator? How is that even possible, setting the gain in the ΔΣ modulator.

I am interested in this, because, if I am reading the datasheets correctly, there will be an input current I need to account for even though if I set a gain to the ADC, since there is no amplifier on the input. But, if I am wrong, then the amplifier should provide a high Z input and decreased input current.

If you do it in the decimation filter, does that increase the input referred resolution? I'm not very familiar with the mathematics of it... Because tables 2a and 2b clearly says that buy increasing the gain you increase the resolution so it can't be a simple digital multiplication. But maybe you average more samples and get a higher resolution like that? But than why does the input dynamic range decrease with the higher gain?

I think you answered the question yourself in this comment...

The decimation filter (following the delta-sigma modulator) is generally an FIR filter. which involves multiplying some large number like 100 samples with 100 coefficients, and summing all the results.

Now you need to extract a 16 bit result from this...

The "programmable amplifier" is simply a selector, choosing 16 of the (in this case) 38 filter output bits. The gain steps are constrained to be powers of 2.

By selecting lower order bits for the higher gain setting, naturally large input signals will overflow (thus dynamic range is reduced) but the last couple of bits contain noise, as shown in Table 2A.

This is just an illustrative example : the details of your device will vary but it is highly likely to follow this principle. The lower order bits (7 downto 0 here) will simply never be calculated, to save logic. And there may be saturation logic so that any positive overflow saturates at + full scale instead of wrapping to a spurious -ve output (and vice versa).

Reading the data sheet, this device apparently uses a much simpler Sinc4 filter instead of the FIR filter I described above (common in more critical applications like audio) but the principle is similar.

I have shown the top couple of bits unused : DSM performance usually degrades catastrophically near the top of the input range where the "noise" from noise shaping and the input signal sum to an out-of-range value. Simply ignoring the top bit or two is an easy way to achieve this. Quoting the datasheet for this device:

" The proprietary architecture used for the LTC2480 third order modulator resolves this problem and guarantees a predictable stable behavior at input signal levels of up to 150% of full-scale. "

but in fact, there seems to be no PGA between the ADC and the inputs but instead the gain is set inside of the ΔΣ modulator somehow.

Well, the block diagram doesn't imply it's inside the ΔΣ modulator. It implies it is inside a block labelled 3rd order ΔΣ ADC i.e. it doesn't mention the word modulator. Of course there may be somewhere else in the data sheet that does say this but it's not said that way in the block diagram so, just regard it like this: - 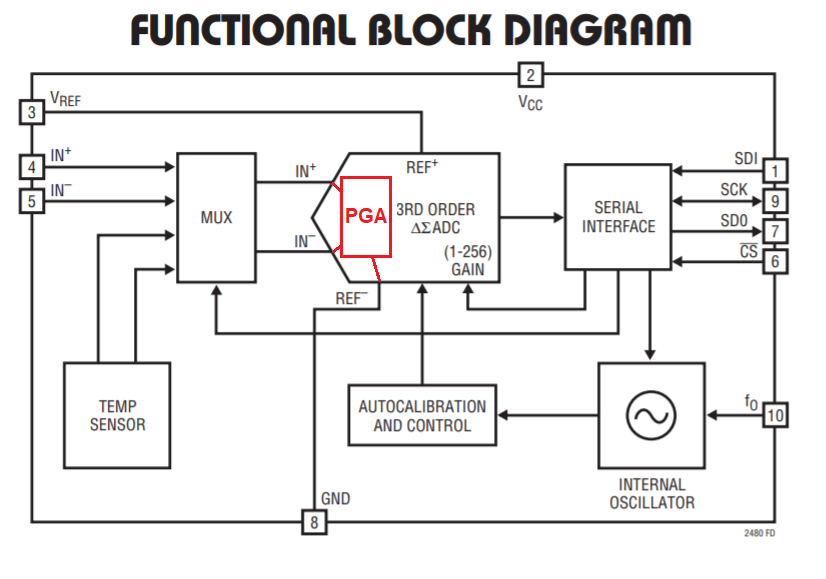 The datasheet goes into considerable detail regarding the analog inputs starting on page 28. I'm not sure why you think that the gain setting would have any effect on this, since they never mention it.

The gain errors are very tiny, so it's easy to believe that the variable gain is a digital function within the convertor, not a separate amplifier.

Not the answer you're looking for? Browse other questions tagged amplifier analog adc datasheet data-acquisition or ask your own question.

1
Is programmable gain amplifier(PGA) in ADC enought to get me precision
0
Operational amplifier bandwidth - why does manufacturer tell it's DC when it is not
0
Mixer datasheet plots
0
Bit order of ADV7125 ADC
0
Pseudobipolar signal example - Analog Devices AD7682
1
What to do with unused pins for this ADC?
0
How to connect 3 slave devices to one master if there are only 2 chip select pins