When does a transistor act as a switch, and when as an amplifier?

I'm a beginner with electronics, anyway I'm experimenting a lot with it. I still don't understand how you can use the same transistor for example to amplify an audio signal, or to act as a switch for turning on and off the current of a motor. Do you use different types of transistor for different purposes? Any help is appreciated, please be tolerant and try to explain it in a simple way, I'm new to electronics 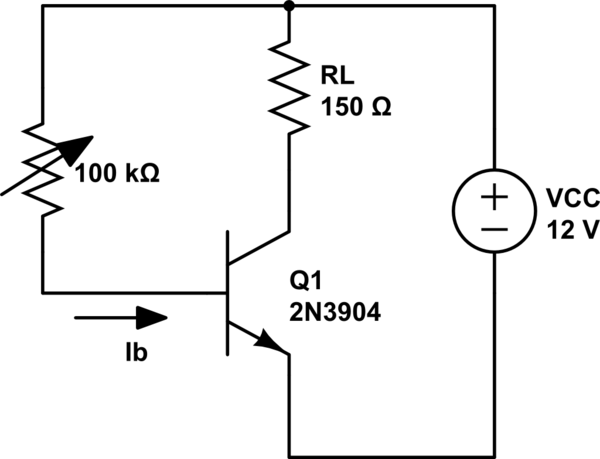 Now, let's assume, you have connected the collector and emitter through a copper wire (i.e. short-circuited). Then the current through 'RL' will be: \begin{equation} i_L= \frac{VCC}{R_L} \end{equation}

This is the maximum value of the current that can be passed through the resistance if the collector & emitter works as a short circuit. And the condition when the collector & emitter works like a short circuit is called the saturation condition. And the current at that condition is called saturation current, which is defined as: \begin{equation} i_c(sat)= \frac{VCC}{R_L} ; when V_{CE} = 0 \end{equation}

But in real life collector-emitter voltage will never be zero. So the equation will be: \begin{equation} i_c(sat)= \frac{VCC-V_{CE}}{R_L} \end{equation}

The range between the cutoff and saturation can be used as an amplifier. Because at that region collector current changes with base current.

And the cutoff and saturation condition acts as a switch. 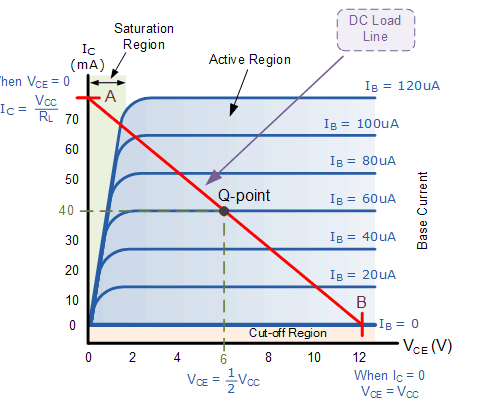 Acting as a closed or open switch is just an extension of it acting as an amplifier at its limits. Imagine you use your weak little fingers to push some buttons to control a massive flood gate. Anything in between full closed and fully opened is throttling the flow of water somehow, but when fully open or fully close it's just acting as a switch to block or pass for the water.

Where's the amplification part? Don't forget that you couldn't possibly control all that water directly with just your little button pushing fingers.

If you have a +15V power supply and a -15V power supply, you can use two transistors to apply any voltage between +15 and -15 to a speaker. The signal that controls all this is a much lower voltage (line input, say).

Hopefully that will make some sense.

Also, this is a conceptual outline of how an amplifier works. There are many, many details I have totally glossed over. Real amplifiers require a lot more transistors (or integrated circuits which contain transistors).

The transistor acts as a switch when driven from 'cut-off' to 'saturation' and vice-versa with an instantaneous change of base current.

Conversely, it acts as an amplifier when you ensure that the inputs are always in that "in between range" where the output is not normally going to be at (or even extremely close to) one rail or the other.

So, somewhere in the range between 0.8 and 2.0 volts, an inverter will act like an inverting amplifier. It's not designed for linearity or low distortion, so it'll probably be a pretty crappy amplifier, but an amplifier nonetheless. Oh, and 0.8 and 2.0 are the rated minimum/maximum it's specified to meet. It may only act like an amplifier over an even smaller range than that.

Oh, along with being a crappy amplifier, a typical digital chip would have a pretty serious heat problem if you tried to use it in the linear range much. When used as intended, the transistors in the gates dissipate relatively little power, because they've turned pretty much completely on or completely off. They're only supposed to end up in the intermediate range (where they'd dissipate a lot more) for a short time as the input slews from low to high or vice versa. With the input "in the middle" for very long, there's a good chance of toasting the chip.

An inverter is really an inverting amplifier, but it's not designed to be used in the range where it would be at all linear. But if you did drive it in the right range, it would be a (really poor) amplifier.

If your input signal varies from 0-1 volt, and you configure your transistor amplifier to multiply it by 5, then you get an output that varies from 0 to 5 volts.

If your input signal varies from 0-1 volt, and you configure your transistor amplifier to multiply it by 1000... but you only have a 5 volt supply, then you get an output that switches between 0 and 5 volts.

I still don't understand how you can use the same transistor for example to amplify an audio signal, or to act as a switch for turning on and off the current of a motor

The very straight answer to your question («how») is because the physics of transistor can be engineered in a such a way to achieve both the things you mention - the transistor need not change, because the I-V curves (namely a higher level view of the physics showing up) have different regions of operation, like 3 or 4 of them. Then, by figuring out what the device may be able to achieve in such regions, but always taking into the account the physics beneath them, you can essentially get the very same device to act differently and then engineering out the best out of them. IOW the physics of the transistor embodies, if you wish, different characters of the same device, provided you're able to extrapolate them.

Please notice this not a straightforward thing: If you take a resistor, that could not happen: no matter how you reason about it, you will never get that behavior because the characteristic curve of a resistor will always be a straight line -- that does not allow it to amplify or switch something. Same for a cap or a diode.

Of the two, I reckon it's easier to view a transistor as a switch from its characteristics -- essentially, it lies down to whether the current sweeps from 0 to something non-zero as the 'input' voltage varies. To act as an amplifier is a bit trickier however: as I was saying above, it turns out that the region suitable to obtain a device that has the properties of an ideal amplifier (and do notice: an amplifier is not determined from its gain) is one. We call it the "active region". So in this case you also have to make sure the transistor does not leave the active region, where again the physics is suitable to obtain those nice properties.

My answer is in a form of question:

A box with two terminals is supplied through a resistor by a voltage source. A voltmeter, ammeter and wattmeter are connected (accordingly, in parallel, series and both) to the box terminals.

How is it possible? What is inside the box?

Not the answer you're looking for? Browse other questions tagged transistors current amplifier switching or ask your own question.

7
Basic transistor wiring
0
Two circuits with different voltages - should I use a transistor or an optocoupler as a switch
1
Transistor as Switch for 1.5A dc motor
2
Using a 1.5V battery to increase the voltage from a headphone jack so it can switch a transistor at lower volumes
0
Looking to create a switch box for multiple audio aux inputs
0
1V to 5V transistor amplifier for arduino digital inputs
2
How does transistor bandwidth affect stability?
0
How to calculate the collector and emitter resistors in a differential amplifier with transistors
1
ESP32 and moisture sensor transistor switch