So I'm tearing down this hair dryer for a school project where I need to make it have variable heat and variable motor speed which can be controlled through an Arduino. I'm currently looking at where I would need to replace the switch and resistor with a rheostat, but just after the switch and resistor, there's an SF169E thermal fuse that is only rated for 10 amps. However, the hairdryer is supposed to be rated for 1875 watts. 10 amps and 125 volts translates to 1250 watts, so where would the other supposedly 625 watts be going?

The hairdryer is a Conair 1875 156QI. I couldn't find a wiring diagram so I made one myself. I know it's not great, and the resistances are made up, but here it is: 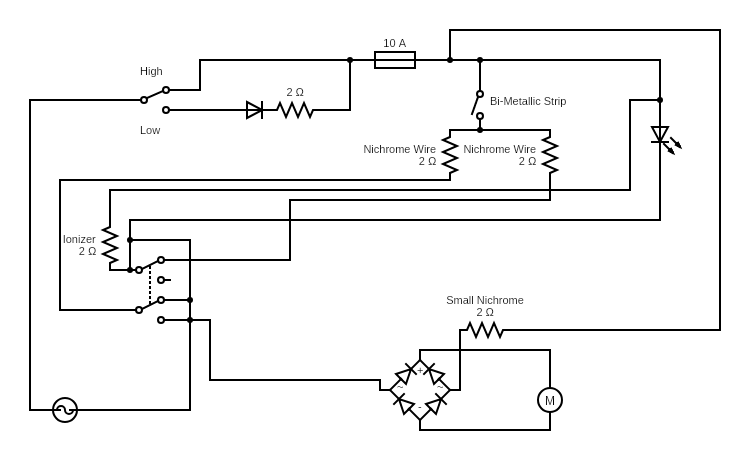 This is a fairly common thing I've seen consumer products that generate heat like toasters and space heaters for example. I've measured the current draw from various space heaters that are all rated for 1500 watts. The small cheap ones measured around 800w and the largest one was 1300w. I can only speculate why they advertise higher ratings than what it's actually capable of. My guess is for marketing reasons or something to do with UL standards.

Not the answer you're looking for? Browse other questions tagged power circuit-analysis power-electronics fuses electrical or ask your own question.