Out of curiosity I'm trying to design an audio frequency range oscillator that would produce a pure sine wave. I'm working in simscape (simulink - matlab) and here is the design I produced : 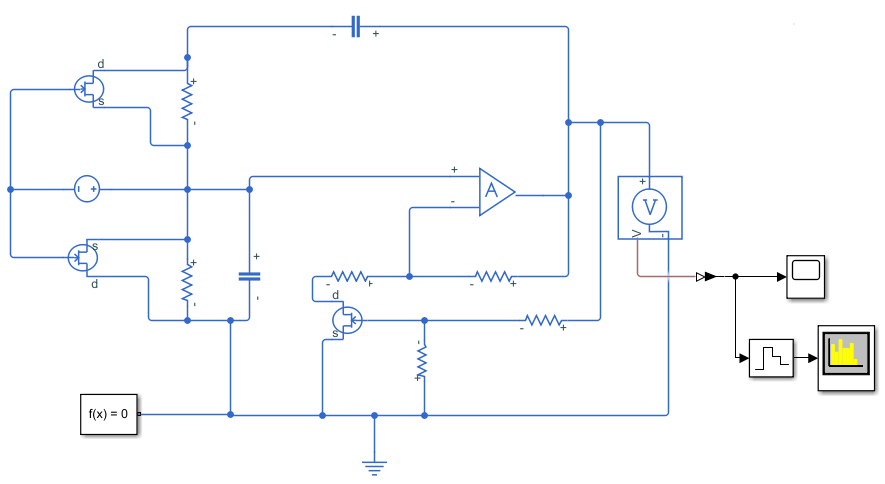 The idea is pretty simple, the left part (without the transistors) is a band-pass filter with a gain of 1/3, which feeds into an op-amp non inverting amplifier. The gain of the amplifier is controlled by a JFET and we feed the output of the amplifier to its gate so the oscillations don't saturate the op-amp. We make use of a voltage divider to feed its gate to have a better control on the amplitude of the output oscillations.

So without the left part everything runs the way I expected it, but I wanted to have a voltage-controlled oscillator, so I decided to use FETs as voltage-controlled resistors put in parallel with the already existing resistors. Then I set a DC voltage between the sources of both transistors and their gates (if later I want to feed a voltage that comes from another circuit I could use a comparator) to control the resistance of the FETs and ensure that both of them have a close resistance.

If I am actually able to produce a voltage-controlled oscillation with this design, adding the FETs added a lot of distortion which I attribute to their non-linearity in the triode region (I triple checked the current flowing through all of them to ensure that they do not saturate), which I do want to reject.

So is there a way on this design to reduce the distortion on my waves ? I am not very used to working with FETs... I was thinking that I could also filter the added harmonics afterwards but then I'd need a Voltage Controlled Filter, and with a similar design I guess that I would see the same distortion so I'm not sure about that solution.

audio oscillator distortion
Share
Improve this question
asked May 22 '20 at 2:14

Browse other questions tagged audio oscillator distortion or ask your own question.