Understanding the working of a NAND GATE using NMOS Transistors

I'm having incredible difficulties understanding how the "Switching Behaviour" (not sure if that's the correct English translation- in German it is "Schaltverhalten") for NMOS and PMOS transistors actually work. I understand the theoretical part of both of them but now how to take boolean expressions and turning them into transistor logic circuits. Here is the NMOS for a NAND GATE, where Z indicates that it's in a floating state, the bold blue line indicates that the source-drain is set to High, the bold black line indicates that the source-drain is set to Low:

I'll explain my understanding using the first image, with both gates set to Low. The current for NMOS flows from the source to the drain. You have two "inputs" i.e. two NMOS transistors that are connected to each other with the original drain gate of the bottom transistor connected to the source of the upper transistor. When both the inputs are set to Low, the NMOS is turned off which means that there is no current flowing through the circuit. Since there is no current flowing through the circuit, the "connection line" between the two transistors is in a floating state . However, what I don't understand is why there is a resistor at the top (and why its input is set to High) and how this results in a High output for the entire circuit.

The resistor you see there is called a "pull-up" resistor. The circuit you show can provide a low level at the output, when the NMOS are ON (in the first circuit). But when they are OFF, the pull-up resistor will provide the high level. The transistors by themselves in that circuit, can't provide a high level, only a low one.

Now, as shown no current flows through the pull-up resistor, and that is why the output node stays high. In practice, if you were to connect something to that output, then some current will flow through the pull-up resistor and may drop the high level accordingly, but in most cases probably not enough to cause the output node to be considerably lower than the high level.

More than a month has passed since this question was asked and probably it is no longer attractive either for the OP or for those who are interested in building reputations. But still I decided to write this answer because I have long been impressed by the ingenious simplicity of this idea...

"However, what I don't understand is why there is a resistor at the top (and why its input is set to High) and how this results in a High output for the entire circuit."

This logic gate is based on the NMOS inverter (aka switch) which in turn is based on the common-source amplifier stage. The role of the drain resistor Rd can be explained in a few ways and all will be true. Some of them actually "explain" nothing ("Rd is the drain resistor"). Others are formal ("Rd acts as a current-to-voltage converter") or too primitive ("Rd is a current-limiting resistor"). There are brilliant intuitive ("Rd and the transistor form a dynamic voltage divider") and figurative explanations ("Rd is a pull-up resistor")... but, as a rule, all they explain specific circuit solutions...

With my intuitive explanations below I will try to reveal the philosophy behind the various specific stage topologies. I will do it in the form of a fictional circuit story; so do not consider the written as absolute truth.

The problem. In the simplest logic gate (inverter or follower), the input voltage has to change the output voltage (Fig. 1) between two extreme values - Vdd (logical 1) and zero (logical 0). So, the question is, "How do we do it?" 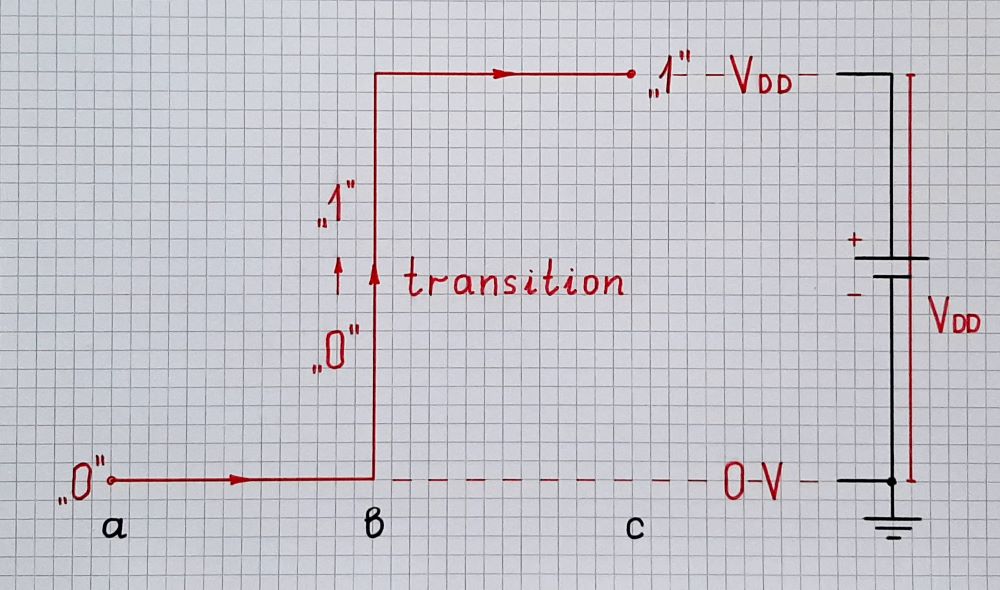 Connecting/disconnecting ideal voltage sources through ideal switches. The obvious way (Fig. 2 and Fig. 3 below) to do this is to connect through switches the output either to Vdd (logical 1) or to ground (logical 0). As though there are two voltage sources - a Vcc voltage source and a "ground" voltage source with zero voltage… and the input voltage determines what of them to be connected to the common output. This circuit works fine in the steady state ("a" and "d" cases) but problems appear during the transition ("b" and "c" cases). Let's see why…

"Open circuit" problem. We (the input voltage source) can change the output voltage (e.g. from zero to Vdd) in two ways. For example, we can first open the closed switch and then close the open switch, i.e. we first disconnect the active voltage source and then connect the inactive source (Fig. 2b). But the problem is that during a short time interval both switches are open (both voltage sources are disconnected). As a result, the output is "floating" (undefined)... and this is undesired in this case. 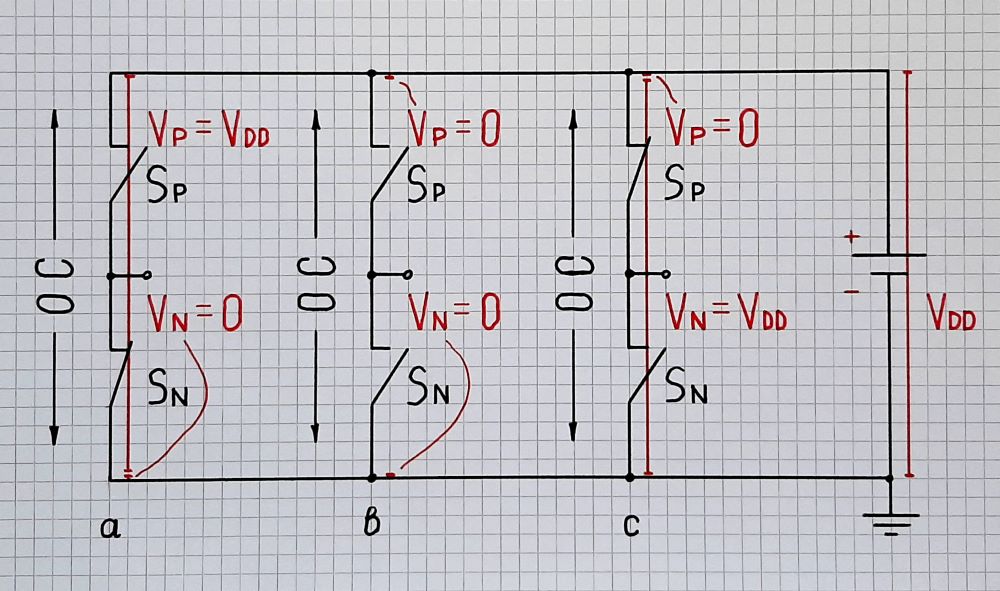 "Short circuit" problem. With the same success, we can first close the open switch and then open the closed switch, i.e. we first connect the inactive voltage source and then disconnect the active source (Fig. 3b). But now another problem appears - during a short time interval both switches are closed (both voltage sources are connected to the output). This means a short circuit... that is also undesired. 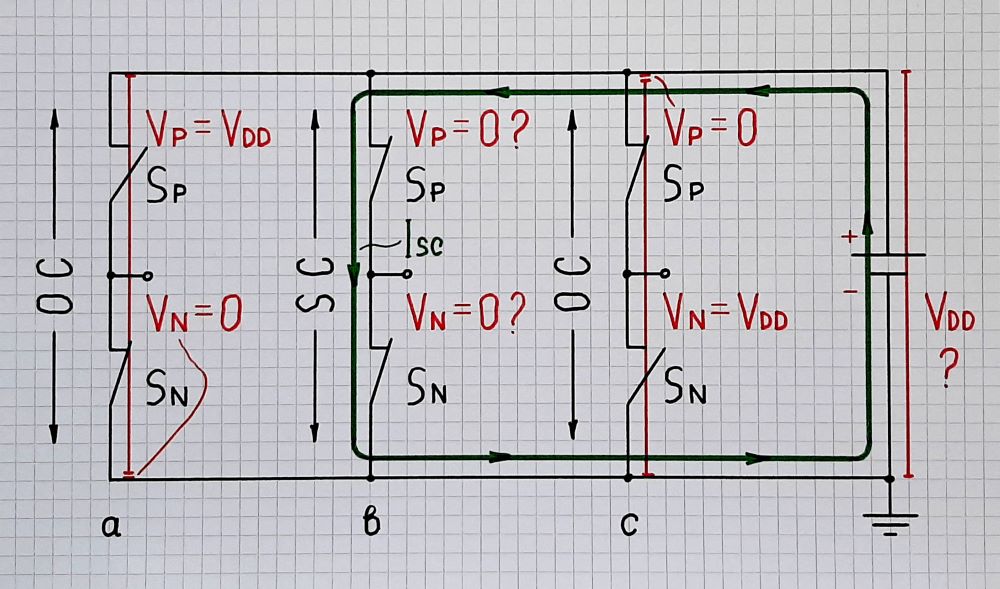 How do we solve these problems?

To implement this idea, they converted the "ideal" voltage source Vdd into a real voltage source with internal resistance by adding the resistor Rd in series to the power supply (Fig. 4). 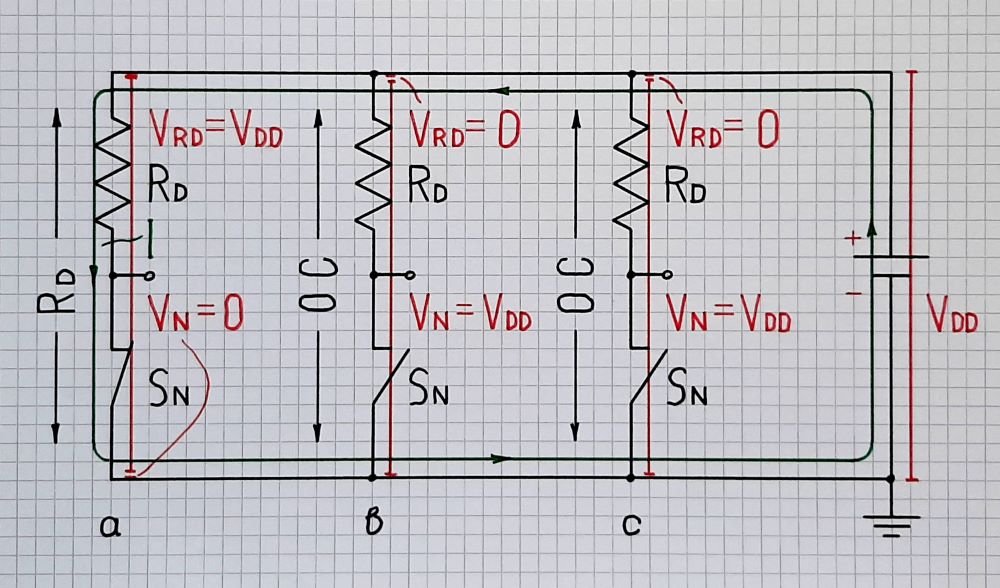 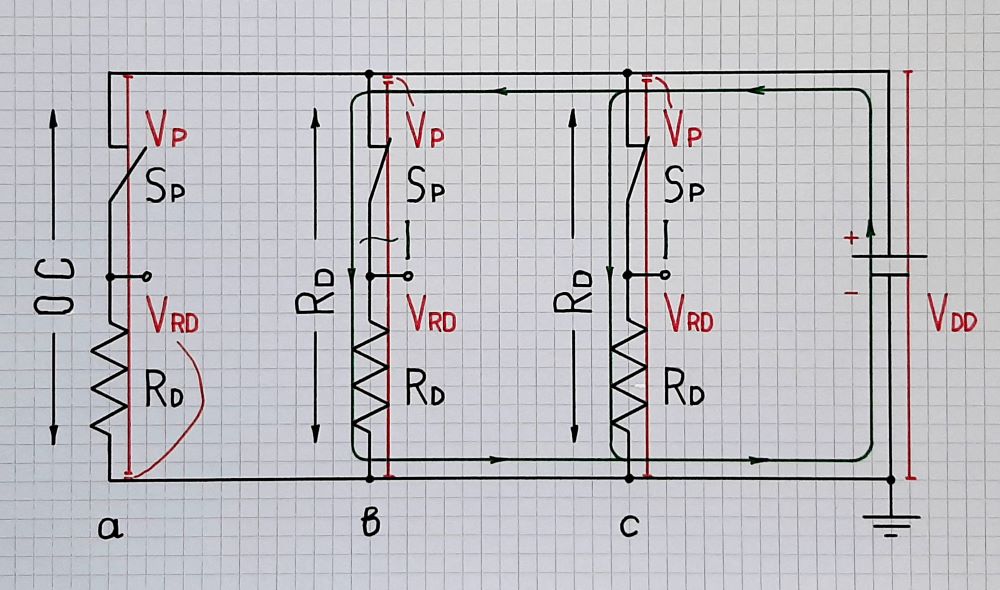 The problem of this 1-transistor solution is the relatively high output resistance in one of the two states. It is entirely determined by the resistance Rd. 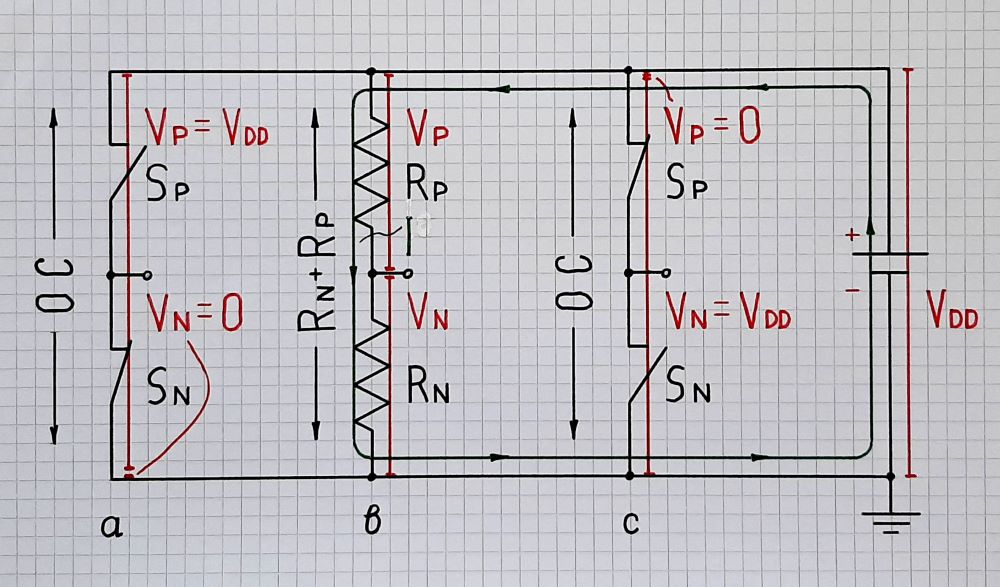 This idea is implemented in an elegant way in the ubiquitous complementary pair of NMOS and PMOS FETs (CMOS). Their transfer characteristics overlap in the middle so the voltage is fixed at Vdd/2 and the current is limited to Vdd/(Rn + Rp).

Disconnecting the circuit from the load. As we noted above, when both switches were open, the output was "floating" - Fig. 2b. There this state was undesired since the input voltage of the next stage was undefined. But in computers this is an extremely useful circuit trick that allows to connect/disconnect CMOS devices to/from computer buses. It is known as a "3-state output", "high-Z output", etc...

This was my amazing story dedicated to MOS and CMOS inverters that I wanted to hear from my teachers in the late 70's. I just wanted them to explain to me in simple human words not only what is done but why this was done that way. And since that did not happen, I did it myself now.

Not the answer you're looking for? Browse other questions tagged transistors circuit-analysis digital-logic resistors nmos or ask your own question.

11
Where are the depletion PMOS transistors?
6
Understanding AND logic gate
3
2 nmos in series
3
What are the rules for combining transistors to form digital circuits?
1
Capacitor problem using an NMOS inverter with depletion load
0
Deriving the NOT logic gate using PMOS logic
9
Why do we need NMOS transistors for NAND gate?
1
CMOS (wrong) OR gate with 4 transistors