Why does this part of an OLED filter light only when orientated correctly?

Note: The screen is an OLED screen. I had assumed it was LCD, therefore the post mentions it as such.

I was disassembling a Samsung phone (GT-I9305) and was able to seperate the LCD into two sections.

The top section consists of the top glass surface and a tinted film wedged between the surface and another piece of glass.

The bottom section includes all the other layers of the LCD with a bronze glass layer on top with a very fine grid like pattern, barely visible to the naked eye. When light it shone on it, a colourful, but distorted reflection is produced. Below this is a black film-like layer with fairly clear and thin light grey horizontal and vertical dashes, similar to those seen in a segmented LCD. Each of the dashes, consistent in size are approximately 1 mm in length.

Based upon this Samsung website, I'm assuming that the layers, from top to bottom are as follows:

When the top section is placed on the bottom section is acts as a filter, blocking a significant amount of light. 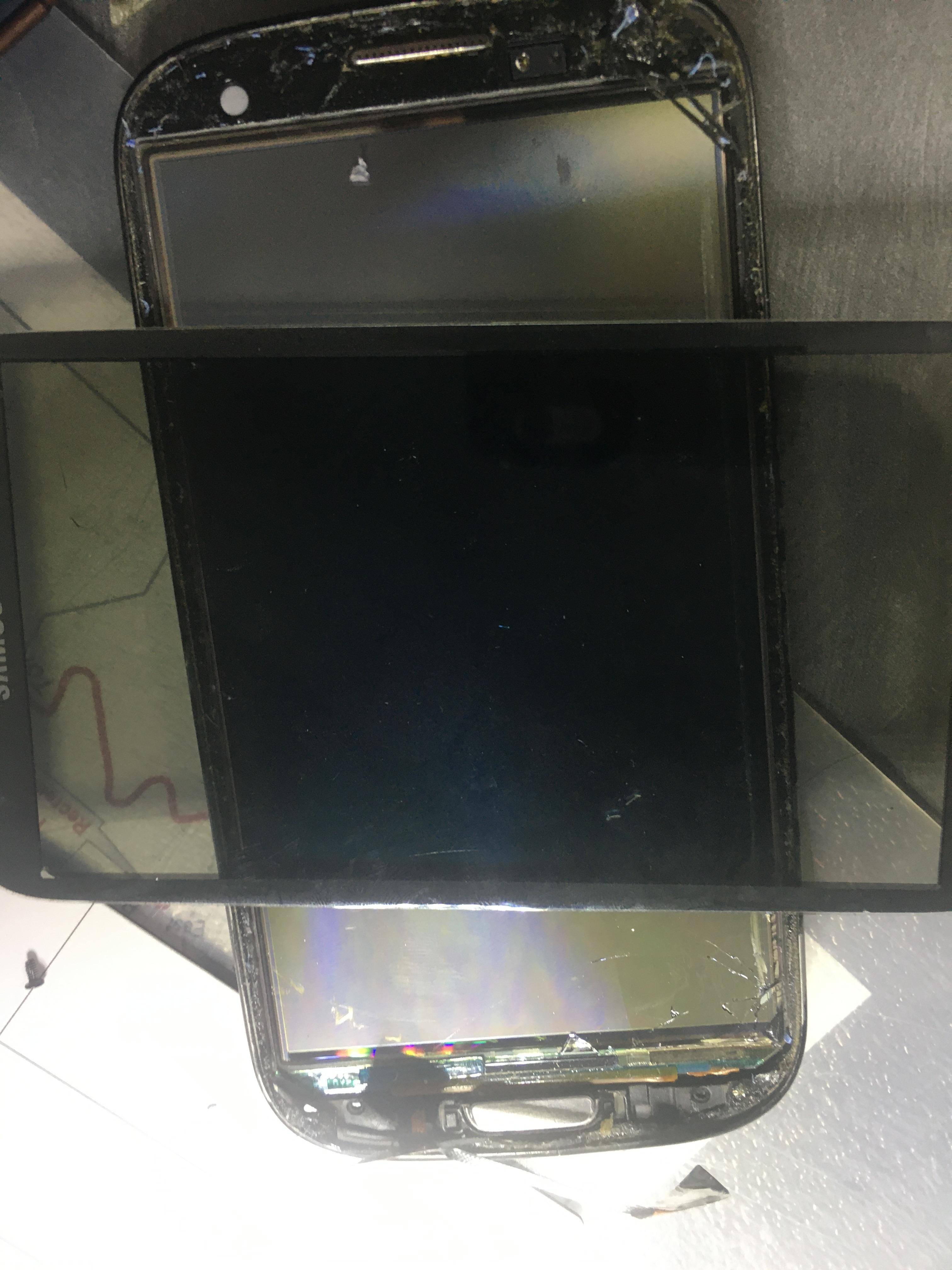 This filtering occurs as long as the top section has the glass surface facing up.

If the top section is flipped, such that the glass surface is facing down, no filtering occurs and is only darkened to the extent that the tinted layer is normally. 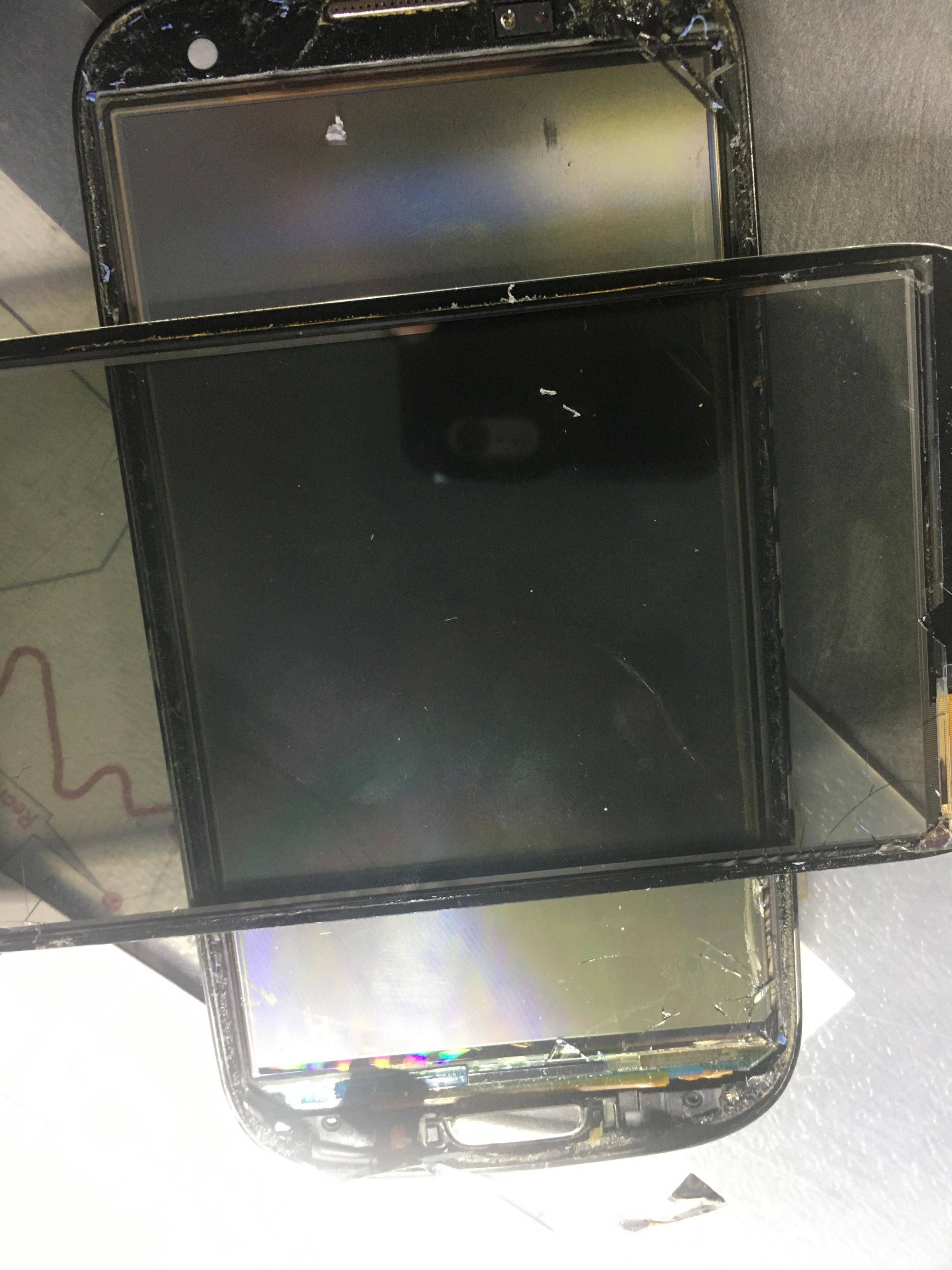 I initially thought that the glass surface had an effect on the filtering, so I removed a small section of the tinted film and observed the same effect. If the glass is orientated how it was designed, it filtered, if it was flipped, it wouldn't.

I thought polarisation should work either horizontally or vertically no matter if the film is flipped or not. That's what I've experienced with sunglasses, so, clearly something else is going on.

If the molecules were orientated along the z axis, that would explain how the top section can be rotated without a change to the filtering, but it doesn't explain why it only works in one direction.

lcd light touchscreen digital-filter
share | improve this question | |
edited May 23 at 9:10
Lachlan Etherton
asked May 23 at 3:49

How does the tinted film only filter in one direction? 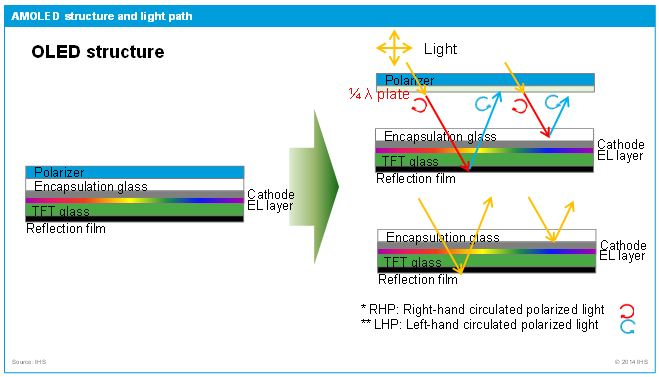 When oriented the correct way, the polarizer converts incoming ambient light to be linearly polarized. The waveplate then converts it to circular. After reflecting through the display, the light passes through the quarter waveplate a second time, accumulating 1 half wave of retardance. This turns it back into linear polarized light, but with the perpendicular polarization, causing it to be absorbed by the polarizer.

In the incorrect orientation, the light hits the linear polarizer before the waveplate and is not rotated one half wave. Without that rotation, nothing is absorbed, which is what you observe.

What is the name of this effect?

It is sometimes informally referred to as the poor man's isolator because it can be used to mimic part of the effect of a Faraday isolator (allowing light to pass in one direction but not the other) but without the cost, weight and magnetic field. Aside from that, I don't think it has a name, or is even considered to be one specific effect. It is simply due the fact that order matters in this particular sequence of filters.

Not really. It also isn't very important here. The key point is that passing through a half waveplate will rotate polarization by 90 degrees (vertical becomes horizontal) while the polarizer absorbs one state and passes the other (vertical passes, horizontal is absorbed for instance). Passing through a quarter waveplate twice adds up to one half wave, so ambient light hitting the screen that reflects off the display panel will pass through the quarter wave plate twice, be rotated 90 degrees, and then (if the plate is in the right orientation) hit the polarizer last and be absorbed. It doesn't matter what the polarization state is in the middle.

But then, how do they ensure the material produces a 1/4 wavelength delay? Does it have something to do with thickness, but then white light is made up of all different wavelengths?

If very high rejection of light is required, a waveplate can be achromatized by taking two waveplates made of different materials and combining them. By selecting materials with very different dispersions and setting the ratio of retardance between the two materials correctly, the change in refractive index in each material can cause retardance to be nearly constant over a range of wavelengths. This is usually not so important for what is basically just an anti-reflection coating though.

Not the answer you're looking for? Browse other questions tagged lcd light touchscreen digital-filter or ask your own question.

12
Efficient display of simple text/graphics on color LCD by ARM
5
Why/when would you use a light to frequency converter?
7
Electrically switching between horizontal and vertical light polarization
2
Why does the human skin steal field lines when it's very non-conductive in dry state?
26
What is this unusual LCD controller technology?
0
lcd display with black background under a semi reflective mirror?
0
Max amps/volts for a 7 Segment LCD
2
LED backlight hotspot