Weak signal via pull up resistor?

I am trying to trigger a camera from another primary camera. The circuit diagram provided is as follows: 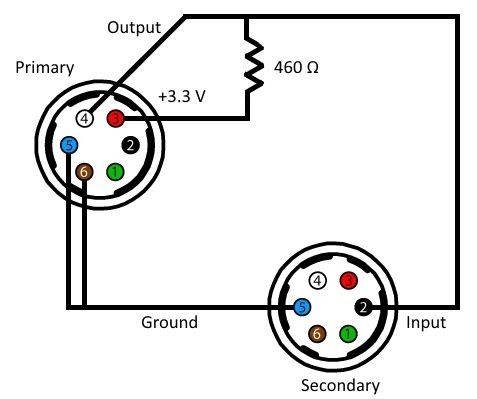 The BFLY camera cable (wrong cable, wrong resistor, wrong pinout) uses opto-isolated input pins, therefore to drive enough current to the input LED of the opto-osolator, it needs smaller 460 ohm resistor. Because it is wrong cable for your cameras, it explains why it works poorly.

The output on both cameras is an opto-isolator output, it is common to assume that it is an open-drain output. That is why it even needs a pull-up resistor. And because the signal is active high, it means that in idle state, the opto-isolator output must drain the current via the resistor to keep output low.

And the smaller the pull-up resistor is, the more current must be drained by the output transistor, and that is why the output pin has offset voltage, because with all that current, it can't go to 0V. It is however low enough to keep the input opto-isolator LED off. This explains the about 0.5V of DC voltage at the output pin when the pin is low.

When there is a trigger event, the open-drain output turns off, so all current flows from 3.3V pin via resistor and opto-isolator input LED to ground. Because the opto-isolator input is a LED, it will have about 1.5V of forward voltage over it. So you will never measure more than about 1.5V because with the 200 ohm resistor, about 9 milliamps flow into the pin. This explains why the output is only 1.5V when turned on.

So, for your BFS camera, the 10k pull-up makes best signal, because the open-drain output does not have to sink much current, so it can go very close to 0V. Using smaller pull-up only makes the voltage higher than 0V.

A 10K resistor will make the signal clearer than with a 460 ohm resistor (for this type of camera) because the output is "open-drain" as Justme just already mentioned.

An open-drain device sinks the current to ground during OFF state signal, bringing the voltage to zero but doesn't do anything during ON state signal. What the input needs to see is either 0V or 3V, or a C-MOS "low" or "high", to be exact.

With 10K, the output, in OFF state, sinks easily all the current coming out of the resistor. If you lower the resistor impedance, for example to 460 Ohms, there is more current flowing through the resistor and the output may not be able to sink so much current. it may even damage the output device. And the input may see or not see 0V or a C-MOS "low" signal.

When the output is in ON state, in fact it just stops sinking the current and the current flowing through the 10K resistor is more than enough to give 3V to the input, meaning C-MOS "high".

Not the answer you're looking for? Browse other questions tagged pullup trigger square or ask your own question.