Modify LED circuit with a MOSFET

I have this existing LED circuit with 2 LED strips with built in resisitors and 1 switch. Normally 1 LED strip is always on and when the switch is closed the other LED strip also turns on. Power Source is a Sealed Lead Acid battery 6Ah and the switch is a regular rocker switch. 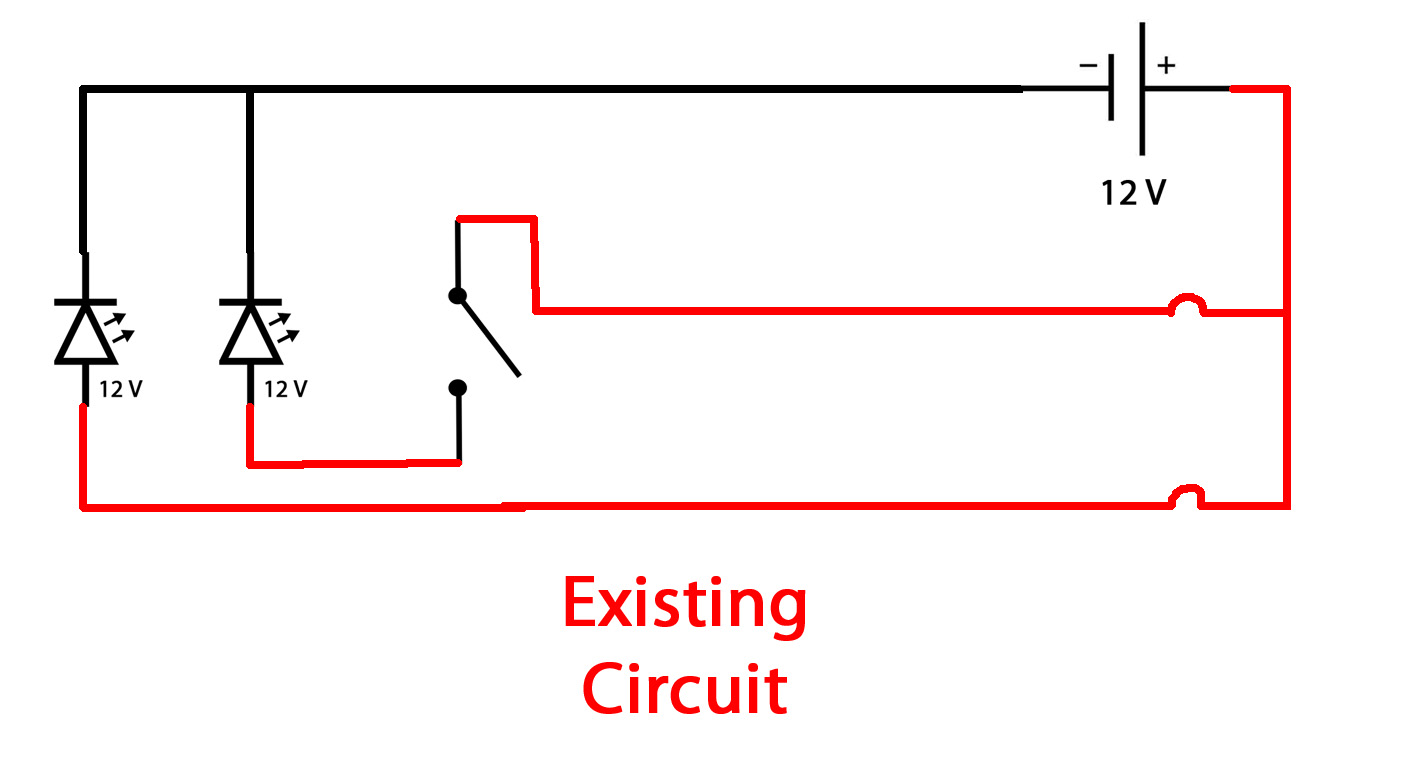 I want to modify this circuit so that an MCU can control the LED strip which was wired to be always on in the existing circuit. So I have made this new circuit diagram which I want to verify is correct or not. In the new circuit diagram (+) power from the closed switch goes to a tiny buck converter which steps it down to 5V for the MCU (ATTiny13a). (- ground) of the second LED strip goes to the drain of an N channel Logic level MOSFET which has it's gate connected to the digital out pin of the MCU. The function of the MCU is to make the LED strip blink every other time the switch is closed. The programming for the MCU will make use of the EEPROM to achieve this so that it knows (remembers) when the switch was closed last time.

In short, the intended function of this circuit goes like this

... and this function repeats

Note: I want the second LED strip to stay OFF even if the MCU isn't powered.

So I wanted to know if my circuit was correct or is there something wrong? like the way MOSFET is connected to the MCU?. Also is it possible for me to switch the (+) of the second LED strip with the MOSFET instead of switching it's (-) ground? 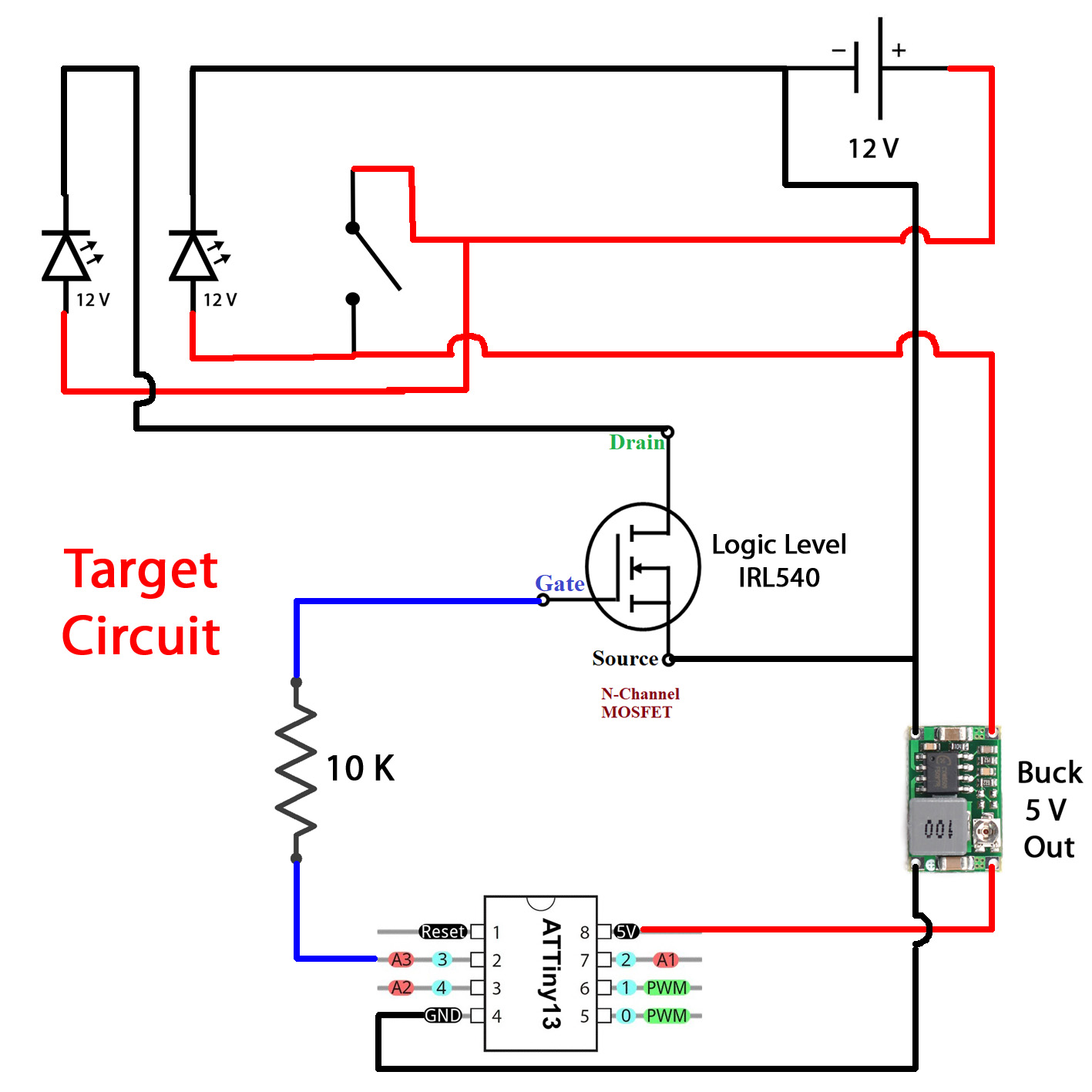 If you took more time thinking about drawing your circuit (extremely important) you'd be able to unclog your thoughts and see that the addition of a 1 Mohm resistor (purple) would be a good idea: - 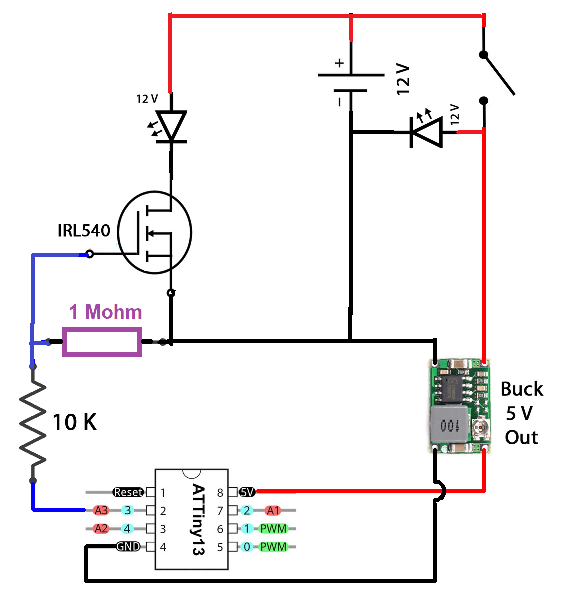 Note: I want the second LED strip to stay OFF even if the MCU isn't powered.

The 1 Mohm resistor is there to protect the MOSFET and achieve the above should the ATTiny become disconnected. It's optional of course.

It's still not drawn perfectly but is a lot better and folk might have a chance of understanding it better.

Also is it possible for me to switch the (+) of the second LED strip with the MOSFET instead of switching it's (-) ground?

You could use a high-side PMOSFET and low side NMOSFET to do that like this: - 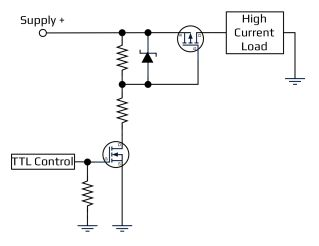 1
Question about mounting two LED strips in parallel, one properly and one reversed, and using a switch to switch between the two
3
Convert NO switch to NC
1
3 way switch with MOSFET
0
Switching on and off a LED light if a AC is passing through a wire or not
3
Connecting two LED stripts with individual power sources to one MOSFET
7
Ideal component to switch 84V DC?
0
Latching power circuit with short-to-ground switch
1
Mosfet: gate voltage 0 but still led strip on
0
MOSFET to drive LED, never turns fully off
4
ATtiny13A LED blink delay doesn't work in OFF mode