I have a circuit that I'm using to detects "knocks" using a piezo element. It seems to work adequately, but as I half suspected, I have now demonstrated that it's possible for the piezo element to generate excess signal (I'm assuming voltage, since they don't really generate much current do they?) and destroy the first op-amp input stage.

I don't really care about the actual signal waveform, but I'm anxious not to introduce delays (the key part of this is an attempt to measure the arrival time of a shockwave at various points in a piece of steel.) So, currently I'm considering adding two 5v1 zeners (because that's what I happen to have lying around) nose-to-nose across the inputs. So, the effect would be like this: 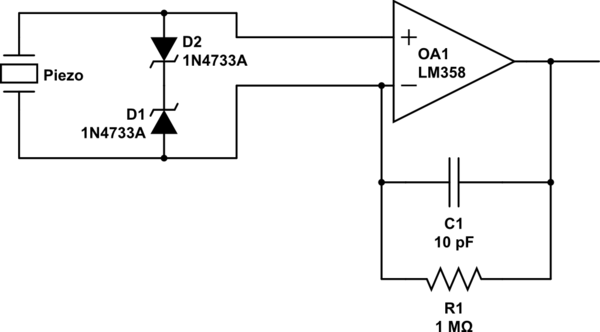 Everything to the right of the zeners is working at present, and I'm confident that limiting the input swing to 5.8 volts will not, of itself, adversely affect the rest of the circuit's ability to do its job.

Are there any concerns that I'm missing here? Again, I do care about response time and must avoid adding lag to the system, but I don't care about distortion, or signal following accuracy, in any of the traditional "amplifier" kinds of ways.

Edit, I transcribed a subset of my actual circuit, intending to focus on the bit that I was interested in (i.e. just up to the first op-amp's input), and I fear that this was not clear. However, I also discovered, thanks for the feedback, that I had made an error in transferring my test circuit to my final. I had omitted the ground connection on the positive input to the op-amp. Oddly, it works (seven copies of it) seemingly just fine like that. Clearly, however, that needed fixing :)

For max dynamic range you could try to clamp the signal to the voltage rails with a germanium diode as long as your op amp can take Vcc + 0.3 V and Vee - 0.3 V. Also make sure the voltage rail can absorb the small burst of current, as long as you have small capacitors I don't think the piezo can produce that much power so it shouldn't cause too much of an issue. This solution won't cause delay.

Otherwise I think your solution in the original post is good since the signal would be theoretically be clamped at +/- (zener breakdown voltage + 0.7 V).

Also, I found a paper on balancing the op amp input impedance by adding a parallel resistor/capacitor to the positive input going to ground. May be worth looking into for noise reduction depending on how small your final signal will be. Here's a schematic combining both elements, component values are a guess. 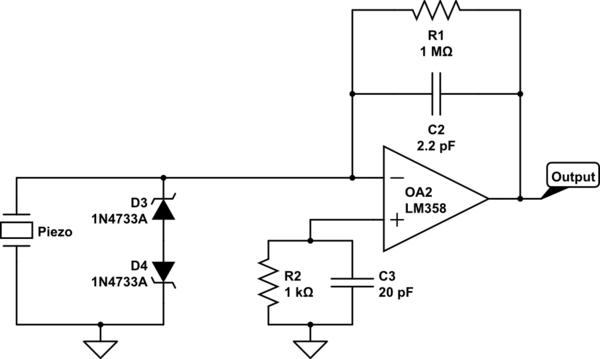 What's confusing is that the + input of the LM358 (above) should be grounded to mid-supply.

A charge amplifier works by keeping the inputs to the op amp at the same mid-rail ground voltage.The output from the sensor is a current signal which charges the feedback capacitor. There shouldn't be any voltage signal directly from the piezo sensor, it should just be current. The integrator converts its input current to output voltage.

I think what's happening is that when the output from the op amp integrator hits the rails, its inputs move apart and exceed the power rail voltages which the op amp won't cope with.

I think I would try putting a couple of ordinary 1N4148 signal diodes back to back between the op amp's inputs to limit the voltage swing of the op amp's negative input to 0.7V either side of mid-rail ground. The added diodes shouldn't affect anything until after the integrator's output hits the rails.

You could then confirm, by scoping the integrator's output that it is still hitting the rails proving that the piezo's output is indeed a current signal.

Not the answer you're looking for? Browse other questions tagged operational-amplifier circuit-protection piezo or ask your own question.

2
If I drive a piezo sensor with switched DC, will I get back over-voltage?
0
Help with resistor in gain and filter op-amps circuit
2
Erroneous results from ADC and piezo disk
0
Piezo input stage for drum triggering
1
What is a good circuit for recording a piezo contact microphone or an electric guitar pickup?
0
Protect output of op-amp from overvoltage
0
A circuit with a non-inverting op-amp and comparator for amplifying the output of a piezo transducer. Am I missing anything?
0
How to protect an op-amp against high inrush current following a high input voltage pulse?
1
How does this piezo input circuit work?
0
protect op amp input from overvoltage from piezo sensor