What does a High Impedance input mean for an ADC

Can someone elaborate what this feature implies? Does this mean i can place a 300 Kohm resistor in series with the inputs? There is even a reference on page 88 with 900Kohm for measuring 220 VAC.

Because if it is it would be great because i can increase the overvoltage the pin can handle just as disscussed in this article. Would i suffer some aliasing using high value resistors??

Nothing to do with aliasing. I won't go into what aliasing is but it is so far removed from the issue that you should go do some reading to understand what aliasing actually is before ever suspecting or worrying about aliasing in anything.

so as much voltage as possible appears across load and not lost in the source via voltage divider.

So do you see the problem if you make \$R_{source}\$ significant relative to \$R_{load}\$? It would result in something akin to drinking a sizeable portion of the wine barrel in order to sample the taste. 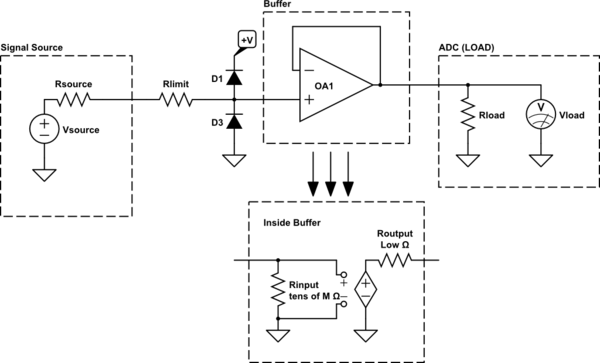 The diodes, whether external or internal (for ESD protection), clamp the voltage to within on forward diode voltage drop of the power rails and are what actually protect the pin. The resistor in turn protects the diodes from frying by limiting the current through the diodes and dropping the extra voltage across the resistor rather than the diodes (which are basically short circuits when conducting).

No you should not put a resistor in between your source and the ADC unless you need to protect the signal quality or ADC input from excessive voltage. Examples of protection are on pg 88 of your datasheet, the diode-clamping/buffer DKNguyen described, or some other circuit wizardry.

The high input impedance of the ADC is a feature that allows you to connect your ADC to a low power sensor or low current signal (read high impedance) without destroying the data. If the signal you're measuring has a source impedance 10+ times lower than the ADC input (aka can supply so much current that the ADC drain becomes irrelevant) than the signal quality shouldn't be impacted too much. Since you're looking at a 24 bit ADC, you've indicating that accuracy is really important, so you might consider using a buffer stage with an even higher input impedance.

The high voltage circuit from pg 88 of your datasheet shows two stages: voltage divider to reduce the ADC input voltage (with several resistors in series for safety) and low pass filtering which actually might help with aliasing if you're expecting high frequency noise on the line (relative to your sampling frequency).

Not the answer you're looking for? Browse other questions tagged adc impedance or ask your own question.

2
Should I buffer my analog input?
0
protecting ADC inputs