I was working on the below circuit, to create a balanced audio output. 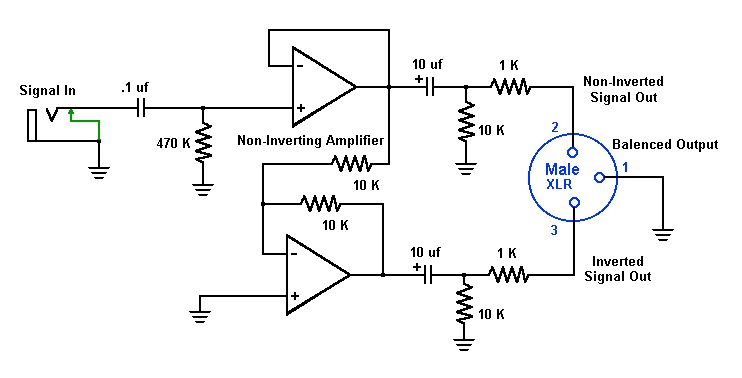 But have been told this creates a differential audio output, not a 'true' balanced audio output.

"A true balanced output would couple interference on one leg to the other, improving common mode rejection at the receiver. Short either leg to ground. If the amplitude on the other leg doubles, it's balanced."

So my question is how to create this 'true' balanced audio?!

Everything I see online from hours of searching all show some variation of the above circuit, with opamps to create a signal and an inverse signal.

Can anyone point me to a circuit that would create a 'true' balanced audio output?

audio balanced unbalanced
share | improve this question | |
asked May 25 at 9:25

"Balanced" generally means that the two wires that carry the (audio) signal have the same driving impedance at the source and the same receive impedance to ground. This means that both wires are affected equally by EMI when transporting the signal - if EMI comes along and "hits" the cable then both wires will be "interfered with" the same. This then allows a differential receiver to reject that interference.

It doesn't mean necessarily that the driven signal is differential - it needn't be in order to create a balanced signal but, quite often is because identical drivers are used at the transmitter in order to get a balanced impedance drive situation and making one output the inverse of the other gains another 6 dB signal to noise ratio.

But a balanced driver can provide 0 volts provided it is sourced through an identical resistor or driving impedance: -

Image from my answer here.

But have been told this creates a differential audio output, not a 'true' balanced audio output.

Your circuit driver looks balanced to me. It happens to be differential as well so that's an added 6 dB SNR.

Short either leg to ground. If the amplitude on the other leg doubles, it's balanced."

No, that isn't a true definition of balanced in my book but, it doesn't exclude a circuit such as that (i.e. a transformer isolating output) from being balanced.

Wikipedia definition of a balanced line (and I agree with it)

Not the answer you're looking for? Browse other questions tagged audio balanced unbalanced or ask your own question.

2
Can I improve serial data signal using reversed output on a twisted pair?