How can I model an optical filter using python?

Say I have an RGB LED which transmit intensity modulated signals, at one symbol transmission I want to send a symbol with all three chips.. Can I just model three bandpass optical filters like RF filters to filter out the individual intensities impinging the PD? I can't seem to find any design procedure on optical filters.

Basically I want to use color shift keying (CSK) to modulate the data symbols into the LED chips and be able to detect the CSK data symbols on the receiver side (as defined by the IEEE 802.15.7-2018 standard). On the transmitter side I am able to modulate (using python) the symbols but however I do not know how to model the RGB filter and I don't really understand the optical filter design process. Some details regarding CSK can be found at [ieeexplore.ieee.org/stamp/stamp.jsp?tp=&arnumber=7482661]

Any direction to relevant literature is appreciated.

There are a great number of parallels between (certain) microwave filters and (certain) optical filters based on impedance concepts. This section of a video can illustrate this: https://youtu.be/pLl3q6WKtxw?t=2346

Both optical and RF signals and filters can be modeled with complex amplitude/phase responses VS frequency, and so you can use all the same mathematical ideas to model the impact of both in the same way.

Probably the simplest way to do this is to work in the wavelength (frequency) domain. You'll need the transmission curves for the three filters, the response curves for the detectors, the wavelengths/spectra of the LEDs, and some sort of background noise spectrum. Then, you can chain the components together - add the scaled spectra of the LEDs and the noise, then do a point by point multiply of that with the filter responses, then do a point by point multiply with the photodiode response, and finally sum all the elements to get the final output of the photodiode.

The Mueller optical calculus is well suited to handling this kind of problem, since the LEDs are intensity modulated. Using my optical calculus software, here is a simple computer simulation that assumes three independently modulated red, green and blue LEDs, three separate bandpass optical filters and one photodiode followed by a transimpedance amplifier:

This is my screenshot of my simulation program. It is not a drawing.

This is my screenshot of the LED spectra. The LED intensities are arbitrarily scaled and are purely synthetic: I did not have real digitized spectra available. These could trivially be replaced with real LED spectra: it is just an import of ASCII text files. The photodiode responsivity is shown by the black trace, with scale on the right. The units are A/W.

For the bandpass optical filters, I synthesized the following deliberately overlapping transmittance spectra:

Only a small amount of noise was added: 10 \$\mu \$V electrical noise after the preamp and 0.01% optical noise on each of the three color channels. The transimpedance was 10 k\$\Omega \$. There is no difficulty in adding noises. Rather, the difficulties are in knowing what noises to add, how much of each one to add, and where to add them. This is not trivial.

The two mirrors and two beamsplitting cubes were specified as being ideal, though that is not required. The three LED modulators are simply producing unipolar squarewaves at 100, 175 and 375 Hz.

When the simulation runs, which takes just over one minute, the voltage output is as shown below: 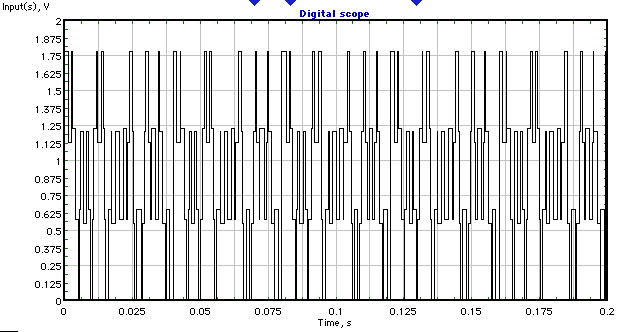 This is my screenshot of the temporal output, from the little oscilloscope. You get this when you double-click on the oscilloscope block.

The PSD is computed at the end of the single simulation and is shown below on a linear-linear scale:

This is my screenshot of the power spectral density output, from the little PSD block. You get this when you double-click on the PSD block.

The three fundamental frequencies, i.e., 100, 175 and 375 Hz, are clearly present, along with several squarewave harmonics.

In the above simulation, it was assumed that the LED emissions were unpolarized, but the full Mueller calculus was used anyway because there was nothing to be gained by simplification of the Mueller matrices and Stokes vectors.

So where is the math? Actually, it is all done in the blocks. An optical calculus is really just a little bit of linear algebra. For any one color, a Stokes 4-vector arrives at the input to a block, gets left-multiplied by the block's resident 4x4 Mueller matrix, and then the resulting Stokes 4-vector is sent out. For any given time step in the simulation, all Stokes vectors arriving at a given block are processed at once: an arriving stack of Stokes vectors is left-multiplied by a resident stack of Mueller matrices, producing an outgoing stack of Stokes vectors. See the Addendum below for the stack exchange format for the optical calculus blocks.

All this is intentionally invisible to the user, unless they happen to want to look at the commented source code. In that case, they would place the cursor on the block, hold down the option key, and double-click. Then the full commented source code, and all the rest, would be available for inspection, modification, etc.

However, if the light is unpolarized, then simplification is very simple: the situation is exactly as alex.forencich stated in his answer. The special case equations are then like this: 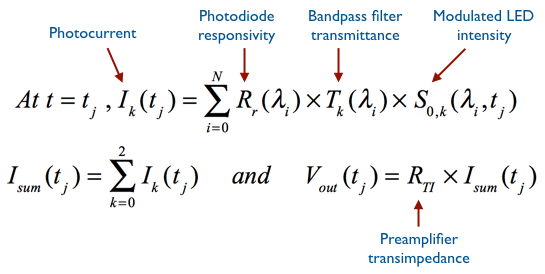 These are the equations I constructed using MathType and annotated with Keynote (all on a Mac). Here, i indexes the N+1 discrete colors, j indexes the evenly spaced simulation times and k indexes the three color channels. I do not know Python, but maybe this all will help a bit when you get to the programming.

The software I used consists of a commercial simulation program (Extend 6.0.8, from Imagine That, Inc.) together with my own free libraries of add-on blocks (named LightStone, my punning play on "optical calculus"). Unfortunately, as I found out fairly recently, my free libraries of blocks, developed and evolved since 1990, no longer work with the current ExtendSim program (versions 10 through 10.0.6). But they work fine with older versions of ExtendSim, e.g., ExtendSim 9.2 on a Window 10 PC. I hope to get this resolved because I have 30 years riding on it.

Addendum: The format for optical block stack exchanges, i.e., outputs and inputs of stacks of optical vectors, is shown in the next figure, which I drew about 25 years ago using (long dead now) Canvas 5.0.3:

My avatar happens to be the right hand side of Fig. 7. In this answer, there are 401 rows, i.e., discrete wavelengths. Since Mueller calculus is used, only the first column is used, i.e., the Stokes vector. Since the light is unpolarized, only the top element in the Stokes vector, i.e., "a" in the figure, is used. Of course, this is the light intensity element and it is both time and wavelength dependent: in Fig. 6, it is labeled as "Modulated LED intensity".

So it is stacks of optical vectors that are passed from optical block to optical block, kind of like this little animated cartoon GIF I made many years ago:

In actuality, the cartoon is a little misleading because stacks pass completely with each simulation time step. But it makes the important point that three dimensional arrays are passing, not just single real numbers.

Not the answer you're looking for? Browse other questions tagged filter python band-pass optics model or ask your own question.

2
How can I model the LC output filter for this BTL audio IC using SPICE?
1
Fourth-order bandpass filter Bessel - I can not solve the final part (math accounts)
2
Laplace transform on simple low pass filter in Python
0
Can a filter change the frequency of the input signal?
0
Understanding SAW filter from optical image
2
Using Python to simulate an LTspice netlist
0
Controlling a digital switch using Python through USB
0
Run Ltspice netlist using python