I recently found one of those old rotary dial telephones in my garage and amazingly it still is fully functional (I tested it by hooking it to the phone line). As I have no use for it as a telephone anymore, what I want to do is to make it ring on demand, using parts that I have on hand. The ringing as achieved by a small "hammer" being driven by a coil and knocking the bells. I measured the AC signal using a multi-meter when the ringing occurred and it read around 50V, which I guess is RMS, so peak voltage should be around 70V... at least that made it ring in my case.

At first, I tried using a transformer I had laying around but it had a ratio of around 23:1, but it made the AC voltage too low for the ringer to work (mains is 230V RMS at 50Hz).

Then, I found out about the capacitive voltage divider, but as I played a bit with it in Proteus I discovered that it seems to need large capacitors in order to be able to drive any reasonable load, like a light bulb. Also, I think the current drawn would be too much for continuous operation.

Lastly, I started designing an oscillator to generate the sine wave from a DC power source (new plan is to use a regular 5V wall plug). I found an example circuit that designs a single supply Wien bridge oscillator, and by adjusting the resistors and capacitors, I was able to generate a 2.5V 20Hz sine wave in Proteus. As physical parts, I plan the op-amp to be a TL-074, and the capacitors regular ceramics (I do not have a lot laying around unfortunately, so I am rather limited there). Next, I thought of adding the transformer that I have in the mix, in order to get the high voltage I need for the ringer. That should give me 2.5V * 23 around 60V peak AC, which hopefully will ring the bell. My remaining question, besides whether all this is a good idea or not, is how to handle the power drawn by the ring bell? I modified the circuit so that the output of the op-amp goes into the base of a TIP41, and then the collector and emitter are connected to the PSU, and the transformer, respectively. Should this be enough to drive the ring bell? Does the phone line really supply that big of a current, beside the high frequency? I played a bit with my telephone and saw that the coil of the ringer is hooked to a giant capacitor. When the line "rings", I can manually ring the phone by tapping the tip and ring wires to one end of the coil and the correct end of the capacitor, but it does not ring if I connect the coil directly. Is that because the line does not feed that much energy and the capacitor "buffers" it? Pardon me if I am wrong, I am just trying to learn, I am a bit confused here and would really appreciate some help to make things clear for me. A useful resource I used for learning about how the telephone line generally works is here. I'd really appreciate any idea on this matter, a different perspective on how to achieve this, I am trying to find a good working design before I prototype it on the breadboard or perfboard because I do not have an oscilloscope and debugging this without one I think would be pretty hard.

I am attaching a screenshot with my current schematic and simulation in Proteus. Yellow signal is generated sine wave before voltage rise, blue is the wave after the transformer, while green is a reference 5V peak 20Hz sine wave, just so that I make sure that the frequency of the generated wave is indeed 20Hz, which seems to be the case. 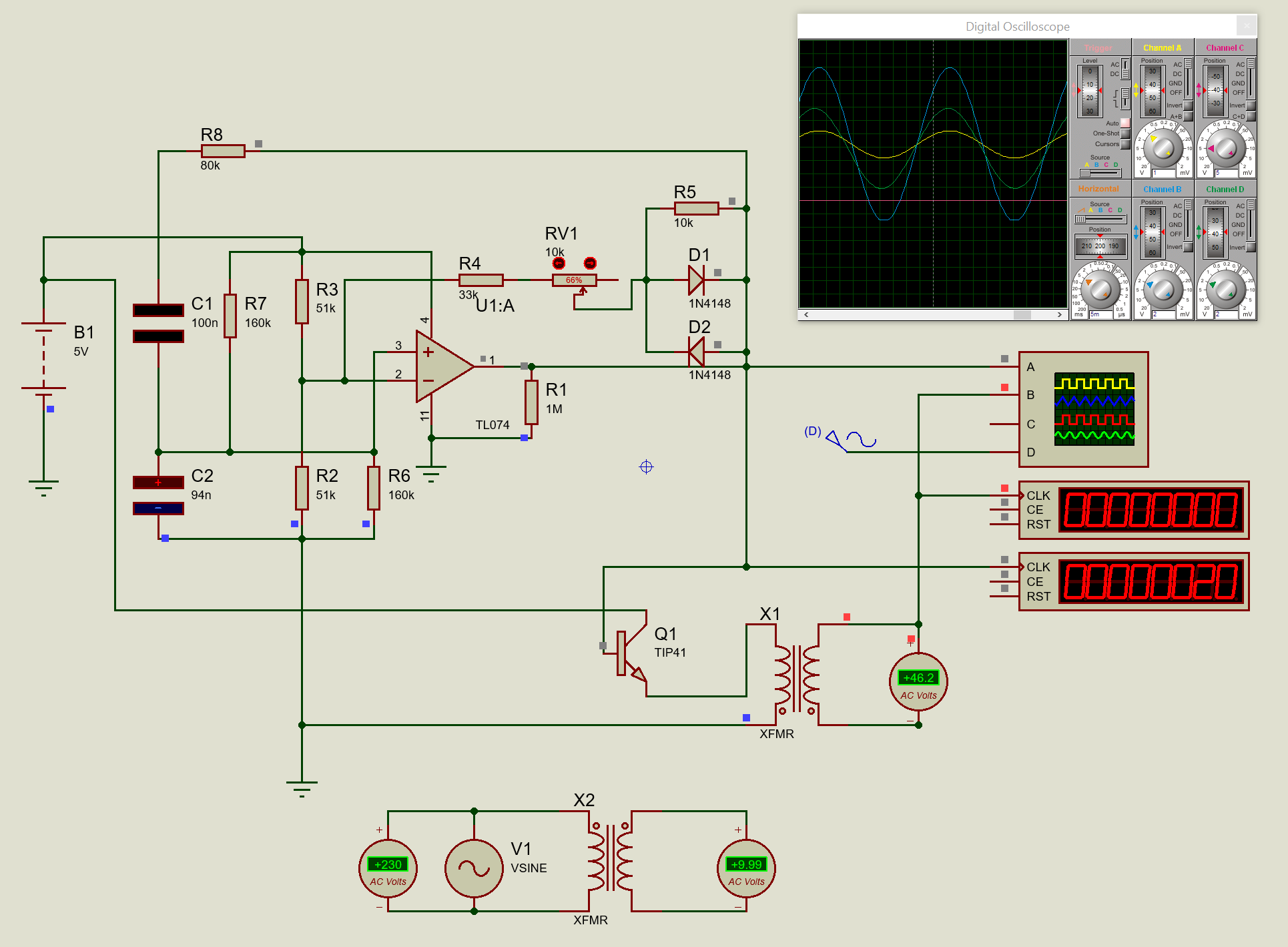 The capacitor and ringing coil forms an LC resonant tank. The coil is very high impedance, so when you connect the coil directly, it will not draw enough current to actually ring the bell.

This is very much by design, so only AC voltage of a fairly narrow frequency range would be able to ring the bell, while DC (blocked by the capacitor) or various transients or audio frequencies would not cause an accidental ringing of someone's phone.

As for the high current, what kind of current do you think this draws? Phones back then were standardized using the REN system - Ringer Equivalence Number. One REN was the load one would expect from one phone connected to a line. Lines would typically be rated for several REN, allowing more than one telephone to be wired to the same line (and all would ring if that line was called).

There may be some region-specific differences, but to the best of my knowledge, most of Europe standardized on 1 REN being the equivalent of 1800Ω of resistance in series with a 1µF capacitor. At 70VAC and 20Hz, this will draw about 7.7mA RMS, or around 10mA peak-to-peak. I would hardly call this a huge amount of current or power - it is less than a one watt.

As for how to actually go about doing it, I think you're overcomplicating things. Your approach also probably won't work unless you planned to rewind a 50Hz transformer so it will work at 20Hz. Any off the shelf transformer will draw far too much current at 20Hz and will simply not have enough inductance to work at such a low frequency.

Fortunately, you don't need a transformer.

You really only need 10mA at most. And you need to increase a small voltage to a much larger one... one might even call it amplification.

What I am getting at is what you are trying to do is really just one of the most common uses of analog circuitry ever, with many examples available for you to potentially use. I speak of course, of the amplifier. 20Hz within the response of many audio amplifiers (for sub woofers), so this is not particularly exotic.

You don't need anything fancy, a basic multistage (for high gain) class AB amplifier will do the trick. It doesn't even need any particularly fancy transistors. I chose the relatively common 2N5401 for the PNPs and a 2N5550 for the NPN which can both withstand 150VCE.

You need about 130VDC but at such low current, it actually makes sense to use a voltage divider to achieve this. Specifically, an AC voltage divider, which then rectifies the divided voltage to about 130VDC. A small filter capacitor completes the power supply. I suggest using X2 safety capacitors for the divider - they are designed to be used like this (across hot and neutral).

As for generating the 20Hz, you could do that how you've done in Proteus. This will give you a very clean sine wave. But the ringer will probably work even off a square wave, and is going to be very forgiving in that regard. Anything that is even vaguely sine wave-like will work.

So why not simply use a 555 to generate a 20Hz, 50% duty cycle square wave (if you're clever, you can even design this with some variability in case the resonant frequency of the ring circuit isn't what you thought it was), then run that through either a passive lowpass filter, or as I have done, a simple active filter using a common op amp. I biased it so it swung 1V to 4V just because of the LM324's common mode range and output swing. But 0 to 5V works fine, just there will be a bit of clipping. Which almost certainly will not matter. 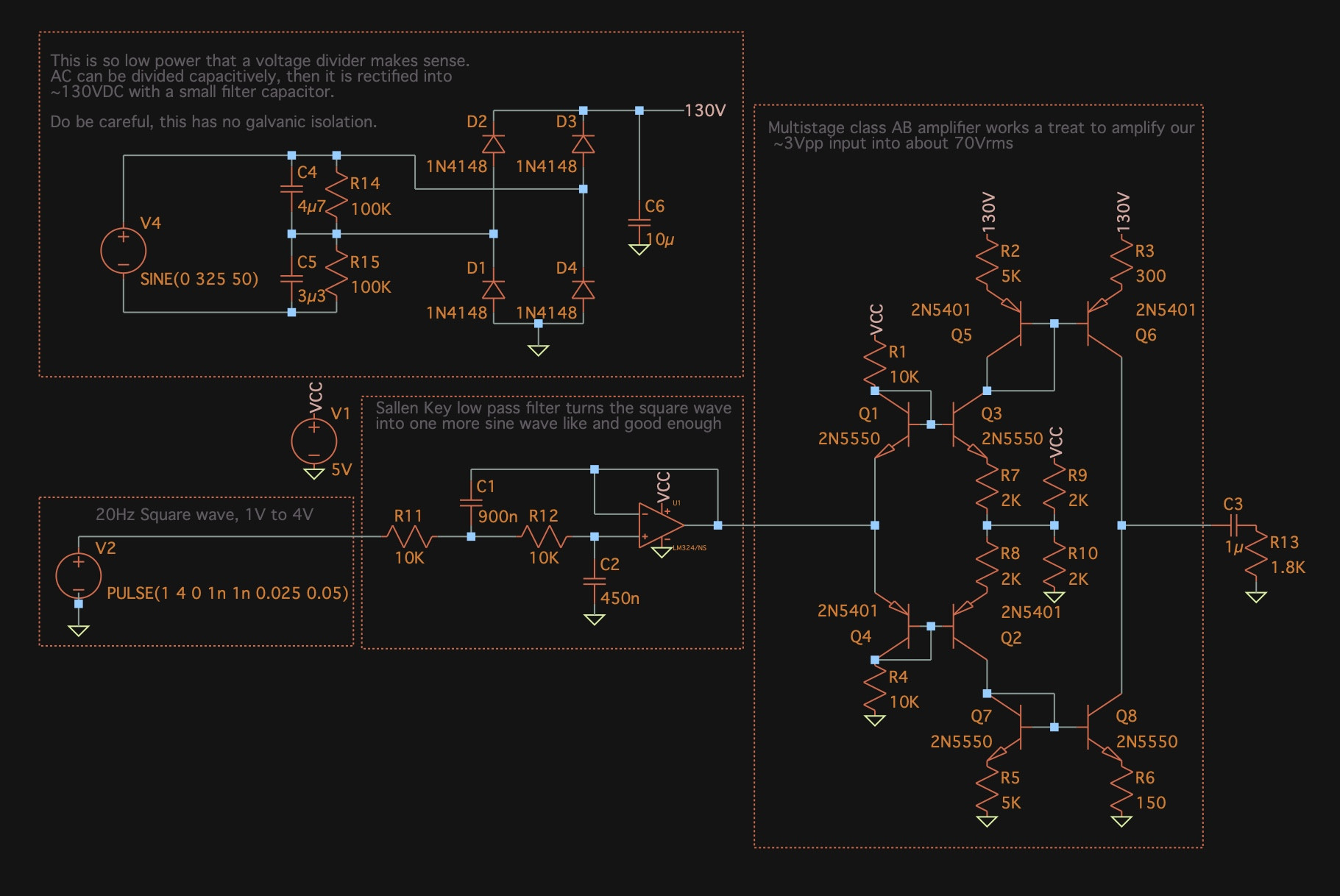 There isn't a obvious, simple solution to this problem, nor do I think the circuit below is necessarily the 'best' solution, but it is a good solution that keeps things as simple and low cost as possible while still achieving the desired outcome.

It will output a little over 70Vrms at 20Hz into a 1 REN load (and probably more), burns very little power (about 300mW on top of the ringer consumption), and while it is not the smallest circuit, it is still easily buildable and uses only common, easy to find components. And you can adjust the output voltage swing and power simply by increasing or decreasing the R3 and R6, the two resistors on the output transistors.

What I like to do, since I only occasionally work on vintage phones, is use a signal generator fed into a good quality audio power amplifier. You might have to adjust the EQ (if the amplifier has one) so the square wave is not too distorted. Check the P-P amplitude with your oscilloscope, and you have it.

Not the answer you're looking for? Browse other questions tagged operational-amplifier telephone wien-bridge or ask your own question.

13
Wiring up old phone ringer to arduino
0
How to make an easy oscillator?
1
Powering an External Phone Ringer - Straight Talk Home Service
1
How would you increase voltage to drive an LED yet also keep it limited?
0
Bias voltage of non-inverting op amplifier drops to 0 when input signal connected
1
How does this telephone circuit modulate the current?
3
Analog (POTS) telephone off-hook detection
1
Getting two way audio from/to a landline telephone, and making it ring
4
Extracting speaker, microphone and hook signals from a two-line telephone
2
Convert 60V AC 50Hz to 60V AC 25Hz