I'm making some simulations in Tinkercad and trying different circuits to turn on a light bulb.

Why does an LED need some resistance and a lightbulb does not?

I'm only using a breadboard and a 9V battery.

With LED's, a small increase in voltage will result in a large increase in current. So it is really hard to get just the right voltage to keep an LED at the right brightness. If you let the voltage just get a tiny bit too high it may destroy the LED.

What makes it even harder is that as the LED gets hot, the current will also increase. Naturally when you power it up it will tend to get hot. As a result it is just too much trouble to drive an LED with a voltage. Some form of current limiting usually has to be put in place. It doesn't have to be a resistor, but that is probably the most simple way to do it.

LED light bulbs have circuitry integrated into them that overcomes all these problems.

Old-fashioned incandescent light bulbs (including halogen bulbs) are different. The part that lights up is made from a thin tungsten wire that glows when it gets hot. The wire has resistance which limits the current automatically. This resistance is also what causes it to heat up. And, icing on the cake, the resistance goes up with temperature, so incandescent light bulbs are really stable when powered from a voltage source.

The "problem" of an LED (and each diode) is that it has not constant (static, ohmic) but "dynamic" resistance that decreases when the voltage applied to the diode increases. Thus, in Ohm's law, both voltage and resistance change but in opposite directions - I = Vinc/Rdec. As a result, the current through the diode vigorously increases... and if the applied voltage is quite higher (9 V here) than the diode threshold voltage (typically 2 V for an LED), the current and accordingly the power, will become unacceptably high. To solve the problem, we connect a resistor in series. The operation of this network is visualized in Fig. 1. 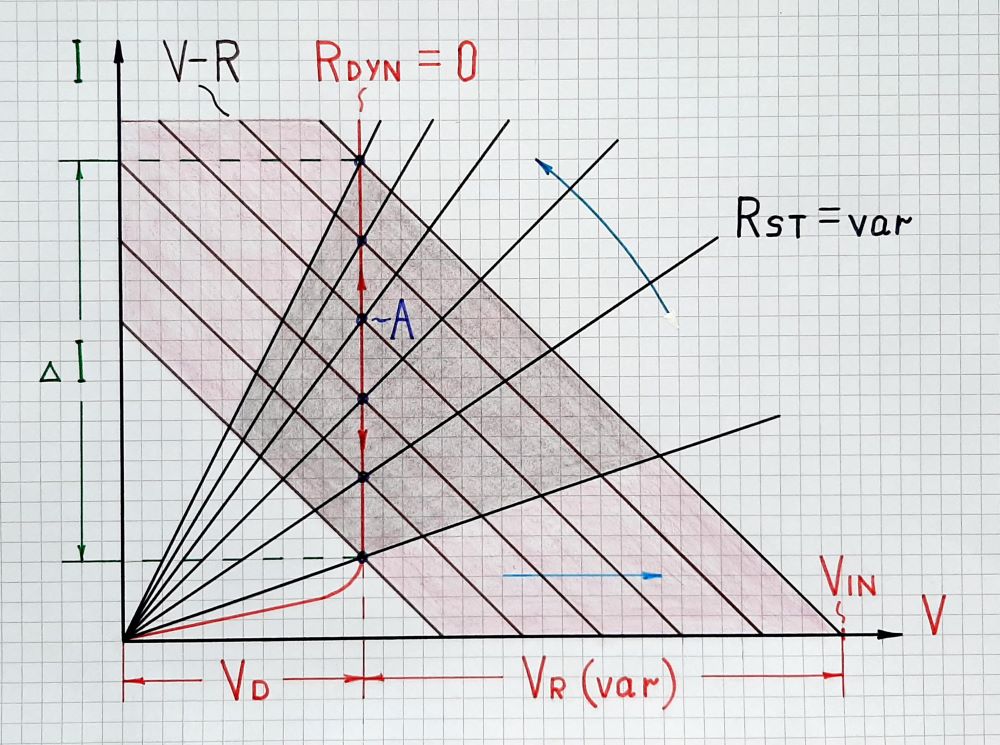 When we turn on the power supply, the (input) voltage VIN increases from zero to maximum. In the graphical representation, its IV curve (including the resistance R) moves to the right (translates). At the same time, the diode begins decreasing its static resistane RST so its IV curve rotates counterclockwise. As a result, the operating point A slides up along the vertical part of the diode IV curve. The current variations are significant while the voltage drop VD (VF) across diode does not change - the diode differential resistance is zero.

The incandescent lamp also does not possess constant resistance. However, in contrast to an LED, its dynamic resistance increases when the voltage applied across the lamp increases. Now, in Ohm's law, both voltage and resistance change but in the same direction - I = Vinc/Rinc. As a result, the current and accordingly the power, more slowly increase... and will not become unacceptably high.

When you say lightbulb I take it you mean an incandescent light source? If so, the 9V battery has nowhere near enough juice to do any damage to its filament, which is usually made out of carbon, tungsten, or titanium. Two of the filament's requirements are high resistivity and high melting point, which is one of the needed features to make it glow and produce light. You might even say, it is its own "resistor"...

A light-bulb is pure resistance - it passes a current and it gets hot and it gets so hot that it glows and produces light. It is inherently an inefficient method of converting electricity into light. It has a voltage and power rating and therefore you apply the correct voltage and you get a power consumption of 10 watts, 20 watts, 40 watts etc.. and a lot of heat.

An LED also produces light and it produces light with maybe up to five or ten times more power efficiency than a regular light-bulb - that is one of its biggest attractions. 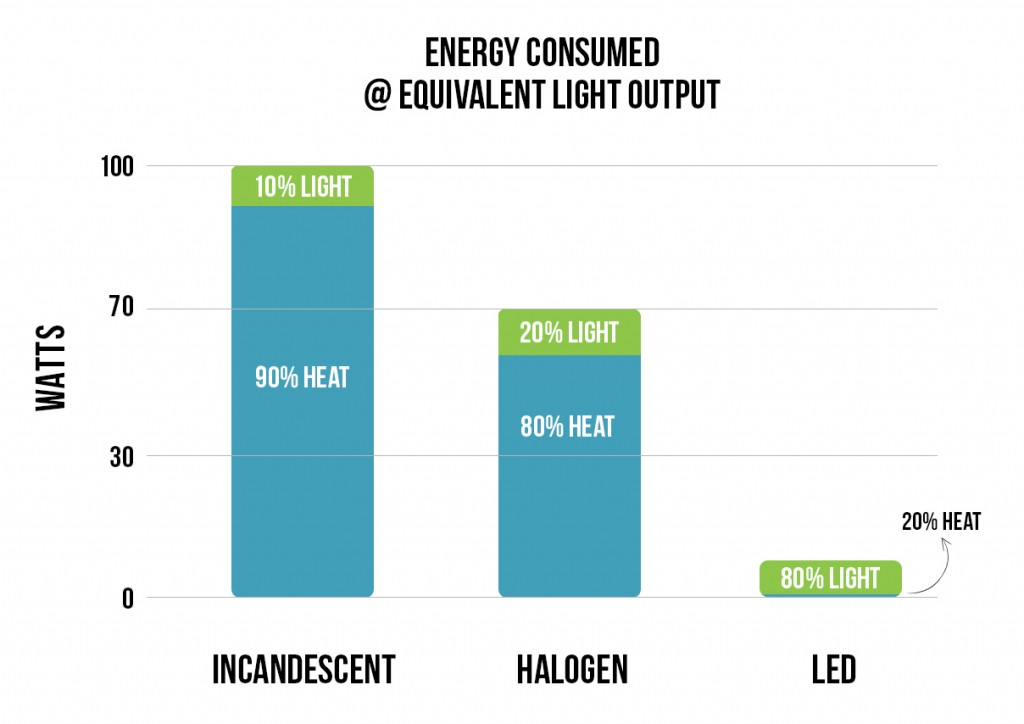 Why does an LED need some resistance and a light bulb does not?

The downside is that an LED comes with restrictions of supply voltage and that means being careful when you apply voltage to it. Of course an LED could come with a built in resistor that allowed it to be used on the same voltage supply as a light-bulb but that misses the point of using an LED to produce light power efficiently.

So, if you don't need a highly efficient light source use an LED with a series resistor. If you are relying on the power efficiency of an LED (because you need to) then drive it carefully, effectively and efficiently.

To add to the existing answers with an explanation from the practical site:

A light bulb is usually manufactured for a specific voltage and then connected to a voltage source.

On the other side, an LED is sensitive to the current. The voltage/current curve varies not only by color, but also by manufacturing tolerances. It is also very steep, so a small overvoltage will cause a huge current and immediately destroy it.

Usually, LEDs are driven by a constant-current source. In simple circuits, this is emulated by a series resistor that limits the current. It needs to be chosen so that the current stays within the specifications even for LED's with particular low drop voltage, or with the resistance decrease that might occur when temperature changes.

So, an LED with a Vdrop varying between 3.2 and 3.4 volt can not reliably driven on a 3.5 V source using a series resistor since the current will vary largely between the allowed Vdrop range. When using a 9 V supply, there is a large enough voltage drop at the resistor to stabilize it even when using UV LEDs with a high Vdrop, like a UV LED reaching 4.4 V Vdrop (the Vdrop increases roughly inversely proportional to the wavelength of the emitted light).

However, as noted, in almost all industry applications using high-power LEDs (so not just as a status LED) they are current driven.

Both the light bulb and the LED are a non-linear elements and they are differently non-linear. (see here: http://physicsexperiments.eu/2097/light-bulb-current-voltage-characteristic and here https://www.electronics-tutorials.ws/diode/diode_8.html for I/V graphs.)

In order to get a stable operation (as in small change of any parameter not to bring large and possibly damaging change of some other parameter) the LED must be fed a more or less constant current and the lightbulb must be fed a constant voltage.

Not that you cannot do the other way 'round.

You can perfectly power a LED with its 3.09 +/- 1% volts (3.09 are typical example for a blue or white LED and the exact number also depends on the temperature of the LED) in order to keep the light output in +/- 50% limits. For the same LED, 3.5 volts are instantly damaging and 2.8 volts are no light at all. Not a deal, is it?

The light bulb when used with a current source instead of a voltage source is more forgiving. It will start rather slowly (say, 1-3 s for high-power lamps) and will get brighter and brighter with aging, leading to much faster aging.

3
Why does a timing light connect to 12 V?
0
How to make a circuit that will turn on a light for only a few seconds when closed
1
Circuit works with power supply module, but not when connected directly with a battery?
3
How to add second, lower power source to car fog light?
0
Can 2 circuits exist and work independantly in an electric guitar
0
Implementing certain sequence of JK flipflop to the circuit using tinkercad
0
Testing a Split Core Transformer based energy monitor circuit using a breadboard
0
Why I am I unable to turn on a load when Wheatstone bridge is connected in series with the load