I would like to incorporate a buzzer in a PCB design. It would not be a coil buzzer, but more a piezo buzzer, and its operation is to be controlled with a micro-controller powered by the same voltage than the buzzer driver circuit, so with compatible logic levels.

Everything is powered up at 3V (linear regulator after a single cell Li-ion battery), and I would like to maximize the audio power given by the buzzer. As far as I understood, there are 2 main ways to power a buzzer: either the direct way, which is with a MOS for the switching and a parallel resistor across the buzzer to reset its state. There is also the full H-bridge way, which in an ideal world would double the peak-to-peak voltage across the buzzer, and thereby allows a gain of 6dB in the audible power transmitted.

I would like to go for the H-bridge method, and I also thought of taking the output of one of the half H-bridge to feed the control of the other one, hence having a single input control pin (which would be used by applying a square wave signal of the desired frequency) for the buzzer sounding. It results in the following schematic 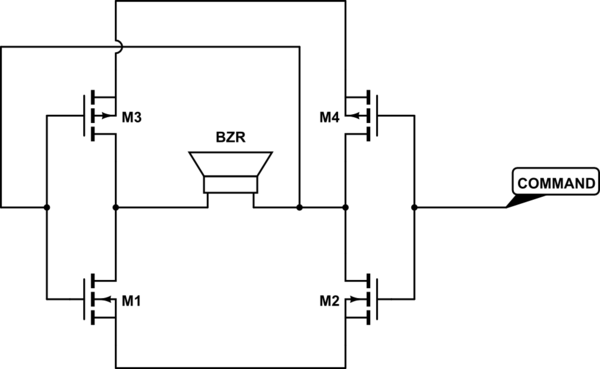 Hence some of my questions:

By looking at the schematic, I told myself this was exactly two inverted logic gates, with the output of one commanding the input of another one, like on the following diagram (sorry for the screenshot, but I was unable to load a second circuit-lab diagram):

So I looked around for some logic gates, and noticed that most of them (like the 74LCV2G14) presented consequent voltage drop on the output with respect to the power rail. This would give me a peak-to-peak voltage across the buzzer of approximately 4V, which is not super high...

Not the answer you're looking for? Browse other questions tagged mosfet h-bridge piezo-buzzer or ask your own question.

3
Is this circuit for driving a piezo buzzer correct?