I'm Working on LED load design circuit which is up-to 64V@1.2A. I thought of giving LED's in series and parallel combination with switches to control the voltage but while searching I found one circuit. 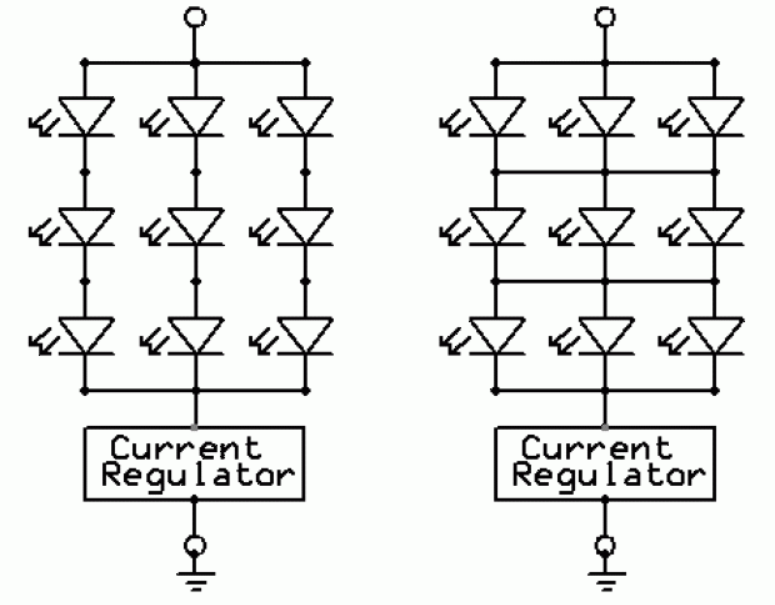 From theoretical point of view both are same but what's the main difference in both the circuits and which one performs better.IS there anything related to thermal protection?

Both are bad, with the right potentially being worse, and harder to implement. You need a current regulation per string, not for three strings.

These are diodes: if one of them is conducting a little better (e.g. due to normal production variations, ie. there will be one that conducts a little better), then that diode will carry more current than its "neighbors" in your right scheme, and that means it gets hotter. Hotter means for diodes that they conduct better. So, that's a recipe for thermal runaway, where the diode that is already hotter gets hotter and hotter by transporting a larger and larger amount of the total current.

In the left case, there's three strings of diodes that are in parallel, which at least statistically reduces the variance between these, but it's not sufficient for reliable operation.

You should use the left design in that you use strings of LEDs. But, you need to give all these strings their own current regulation – either by having one "Current regulator" for every string, or at least by placing a resistor in series with every string, so that if a string pulls more current than the neighbor, the resistor drops more voltage, counteracting that runaway effect.

Not the answer you're looking for? Browse other questions tagged led led-strip led-driver constant-current led-matrix or ask your own question.

1
Improving this current regulated LED driver circuit
4
Powering RGB LED's and using a PWM chip; series or parallel?
5
How can I electronically sense the state of an LED in another device with an Arduino?
1
LED blinking array using LC-circuit
1
What is the difference between these 2 types of drivers?
0
LED series-parallel and parallel-series combination circuit
1
Parallel circuit with LED on one path and resistor on the other
2
How to solve a LED-resistor parallel with a resistor?
0
Powering LEDs, dim LED in parallel
0
Series and parallel LED using