Why can't I short circuit a virtual ground with ground in OP Amps?

Consider this circuit for instance.

This value isn't equal to the above calculated value, hence there must be something wrong with this method. The only mistake I can think is short circuiting \$R_3\$'s one terminal with \$V_1\$ junction. But why can't I do that?

You can't do that because even though V1 sits at the same potential as ground, it is a different node in the circuit and as such has an isolated current path. Sharing the same potential is not a sufficient condition to consider components to be in parallel; they must share the same nodes. If you connect anything else to that point (such as R3) you disrupt the operation of the circuit by allowing current to flow through a new path.

In this circuit, the current into the op amp input pins is zero, so the currents through R1 and R2 must be identical. However, if you connect R3 in parallel with R2, then the current through R1 will be split between R2 and R3 instead of flowing exclusively through R2. As a result, the circuit will behave differently.

In effect, you are asking why these two circuits are not equivalent: - 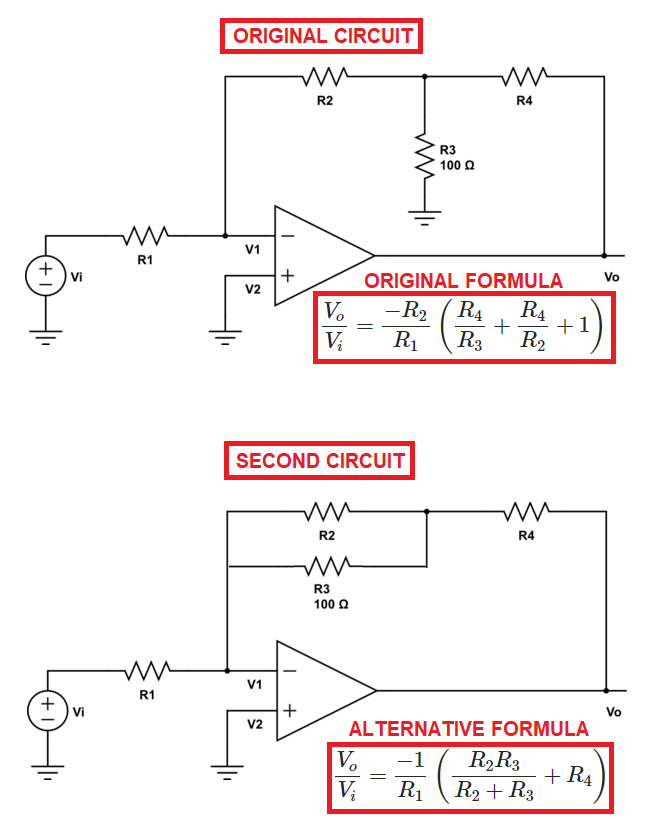 And the obvious reason is that R3's current instead of going directly to ground, would pass through R1.

The essential problem here, beyond what other answers (at this time) have pointed out, is that the node voltage at the lower end of R3 is zero volts by definition (the circuit common is the zero volt reference).

So, while it is tempting to think that one can connect the inverting input (in this circuit) to the circuit common since \$V_1\$ is (ideally) zero volts, doing so would 'disconnect' the feedback from the output terminal, i.e., the output would 'loose control' of the voltage \$V_1\$

If it helps to see this, try driving the non-inverting input with a voltage source \$V_{i2}\$ and then redo the analysis.

Also, it might be helpful to back off from the ideal op-amp approximation in your circuit and redo the analysis from scratch. That is, set the open loop gain of the op-amp to \$A\$ and, making no assumption that \$V_1 = V_2 = 0\$, solve the circuit. You'll find that only in the limit \$A\rightarrow\infty\$ does the voltage \$V_1 \rightarrow 0\$

There are three points to nail down here.

The second point is the concept of a "virtual ground". It's not actually 0V, it's just a very, very low voltage which is small enough that for practical calculations we can assume it's zero. The output can't go past the power supply rails, so knowing the gain of the op-amp, we can work out how big the difference between V1 and V2 can be if we're running the op-amp without clipping. The datasheet for the TL071 op-amp, for instance, specifies a typical gain of 200V per mV difference, which is a gain of 200,000. If you've got a 10V power supply to your TL071 then, that means the voltage on V1 cannot be any greater than 50uV. In a practical circuit this is probably below the noise level of your measurements, and that's why you can assume it's basically zero for your calculations.

Relating to this, it's worth mentioning that the fact you do need a voltage between V1 and V2, however small, is why you can't swap the inverting and non-inverting inputs. That small voltage on the inputs needs to be going in the right direction, or else your output won't go in the right direction. The results will depend on the circuit, but often this will result in the circuit being unstable and turning into a kind of oscillator.

And the third important point is that the resistance between the op-amp inputs is very, very high. Looking at the TL071 again, the datasheet says 1012R - yes, that's 1 teraohm. This is why your op-amp theory says that all the current going through R1 is also going through R2, because the current through the op-amp input is below the noise level of your measurements. (Although again, it doesn't mean the current is actually zero!)

To cover the second two points, it's useful to think about the "equivalent circuit" for the op-amp.

This is taken from a good tutorial about op-amps which you can find here.

To get a feel for the effects of the gain and input impedance, it's very useful to start with a simple circuit (a basic inverting amplifier, for instance) and replace the op-amp with a resistor between the inputs and a voltage source on the output. (You can probably ignore the output impedance for now.) Pick some resistor values for your circuit (say, a 1K and 10K to get a gain of 10), then pick an input resistance and a gain and do the sums. Start with maybe an input resistance of 100K and a gain of 100, and see how it works out. Then increase the input resistance to 1M and the gain to 1000, and try again. You should see that you get a small error on the output so that it isn't exactly a gain of 10, but the more you increase the input resistance and gain, the smaller that error is. Then finally try with 1 teraohm and a gain of 200,000 to get the numbers for a real circuit.

I find this is actually a really important exercise to do. Generally it's covered a little further on in your electronics course, but the problem there is that you start off having to assume some "magic rules" for your op-amp which don't really make sense. Less able students can often just accept the rules and plod along, but more able students start asking all the awkward questions about why it works that way. If you start off with the basic concept of how the op-amp behaves though, you can get that intuitive grasp of why those "magic rules" work.

An input current of 1mA thru R1 will flow thru R2 and this forces a current of 10mA thru R3 assuming R2 is 10xR3. The input source does not supply the current for R3, this is sourced from the opamp's o/p as the opamp action aims to maintain both of its inputs at virtually the same potential (0V). The sum of IR2 and IR3 flows thru R4 effectively amplifying the feedback current.

By placing R3 in parallel with R2 the input current of 1mA splits between R2 and. R3 so IR4 remains at 1mA.

I am glad to see this question here because, 7 years ago, I joined the electronics forum of ResearchGate with the same question, "As the virtual ground is a kind of ground, can we connect it to the real ground?" ... and I received 38 answers (a good achievement for a newcomer). A few years later, after asking more 123 questions, I moved to SE EE… and now I am answering the same question here. But I realize that after all these years, I should say something better and more intriguing.

Although the virtual ground evokes a sense of mystery, I will try to show that it is a simple concept. The paradox is that I have to use a lot of words for this purpose... but I do not see other way to convince you...

1. Changing the voltage of the inverting input (an example are inverting circuits with negative feedback)

My answer is simple and maybe surprising: The whole circuit of four resistors and op-amp is a follower… but a "disturbed follower". I will explain what I mean by showing the evolution of the circuit from an undisturbed to a disturbed follower. 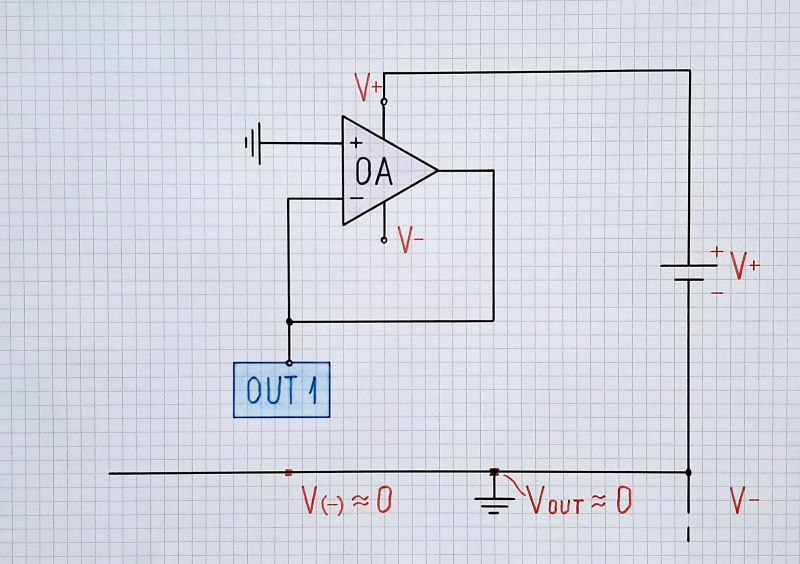 The op-amp will do whatever to keep (almost) zero voltage between its inputs (the H&H's "golden rule"). So the voltage of the inverting input is a copy of the ground voltage (almost zero)... and the circuit acts as a zero voltage stabilizer with negative feedback. This node serves as another but artificial ("virtual") ground.

2. VIN+R disturbed follower. Now we decide to see if this stabilizer is reliable… and, for this purpose, we intend to "provoke" it with another voltage source. But let's not be so brutal and connect it through a resistor to this node - Fig. 2. 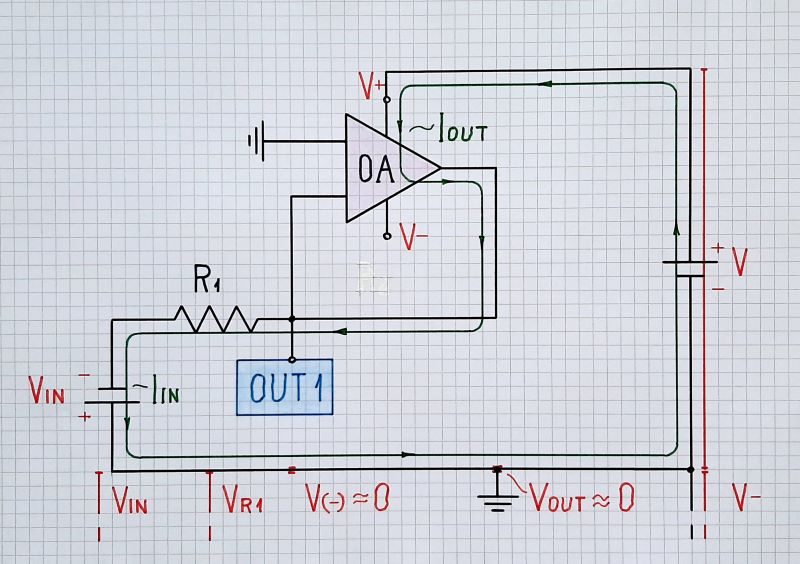 The (input) voltage source "pulls down" the virtual ground... but the op-amp, behaving as a perfect voltage source, does not allow it to *move". So, the op-amp does not react noticeably to this additive disturbance. We have to do something else...

3. VIN+R1+R2 disturbed follower. The problem is that the two sources try to set the voltage of the same node but they are not under the same conditions - VOA does it directly while VIN through a resistor. Then let's make it difficult for VOA by connecting another resistor R2 in series - Fig. 3. 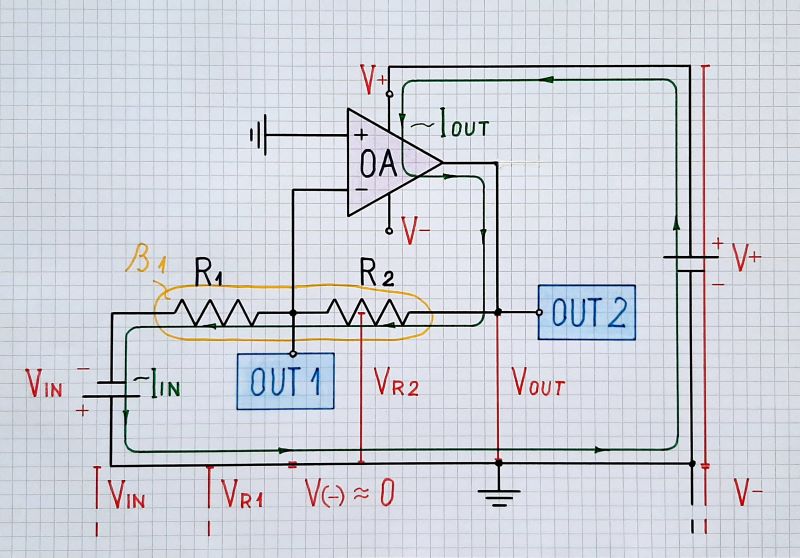 The resistors R1 and R2 constitute a voltage divider acting as a multiplicative disturbance (beta1) for the op-amp. To compensate it, the op-amp increases R2/R1 times its output voltage… thus acting as an inverting amplifier (if we take this voltage as an output VOUT).

Very interesting - we managed to explain in a logical way the need for both resistors R1 and R2 in an inverting amplifier! But note the voltage follower is still here and it continues keeping steady zero voltage at the virtual ground node.

4. VIN+R1+R2+R3+R4 disturbed follower. If we want a higher gain, the ratio R2/R1 becomes too high... and we decide to put another multiplicative disturbance beta2 (voltage divider R3-R4) in the feedback loop - Fig. 4. 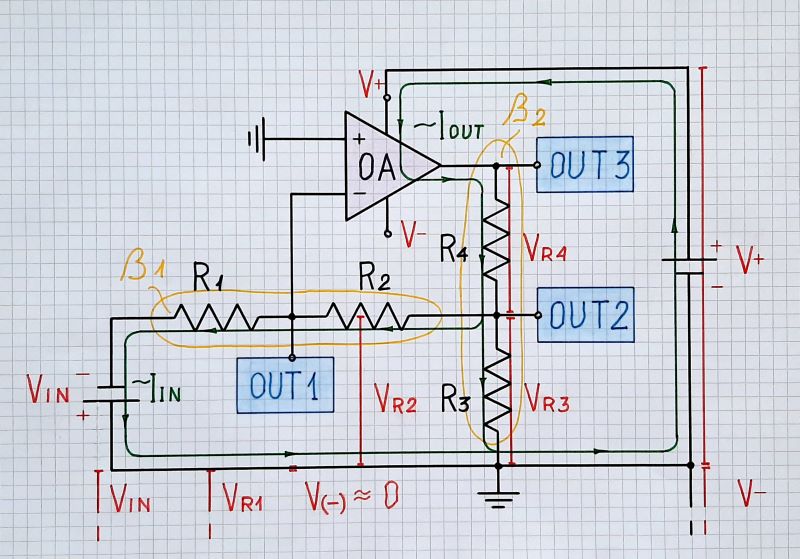 The op-amp reacts to this intervention by increasing more (1 + R4/R3) its output voltage. So, this "twice-disturbed follower" acts as an amplifier with a higher gain. Note that the previous voltages remain and there are in total three circuit outputs - the undisturbed VOUT1, once-disturbed VOUT2 and twice-disturbed VOUT3... but here we are interested only in the first.

The conclusion is that when disturbing more and more the op-amp, it overcomes any disturbances (here, one additive and two multiplicative) in the name of maintaining zero voltage at its inverting input (of course, its output voltage must not reach the supply rails). In its quest to achieve this, the follower becomes an amplifier.

It is so interesting conclusion: An amplifier with negative feedback is actually a disturbed zero voltage follower! And this is the recipe how to convert a follower into an amplifier - by disturbing it.

We can see this technique everywhere around us... and even here, in SE EE:) Let's consider this intriguing psychological phenomenon.

As you know, there are people who regularly downvote our answers; thus they regularly "disturb" us. But since we behave (like the op-amp above) as a negative feedback system with a goal, we overcome these "disturbances" and write even better answers.

This was my incredible story about the virtual ground… particularly, in this circuit solution aka "inverting amplifier with T feedback network". I hope that now you will better understand why you should not connect the virtual ground to real ground... 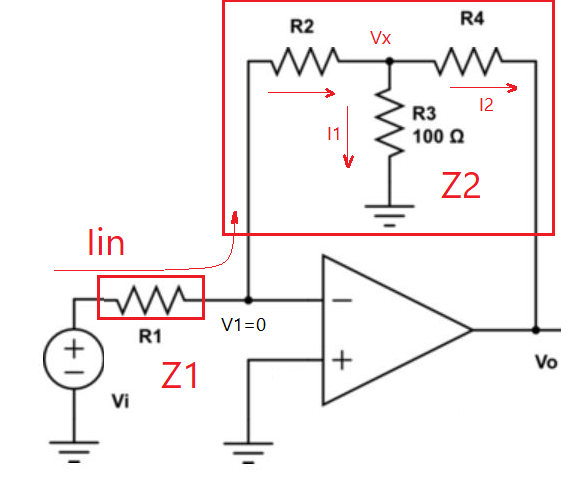 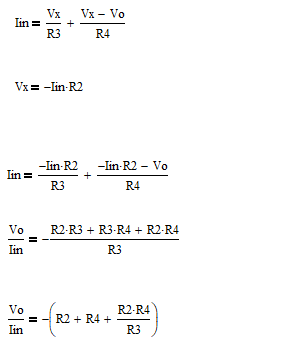 1.from the results it is clear that the output is in negative saturation 2.if R2 and R4 are >> than R3 it is very big impedance and need to use this circuit only for low current or have sum DC voltage in "+" of the opamp. 3.R2 + R4 in this case are negligible 4.this circuit usually us to detect smoke or dust in the air 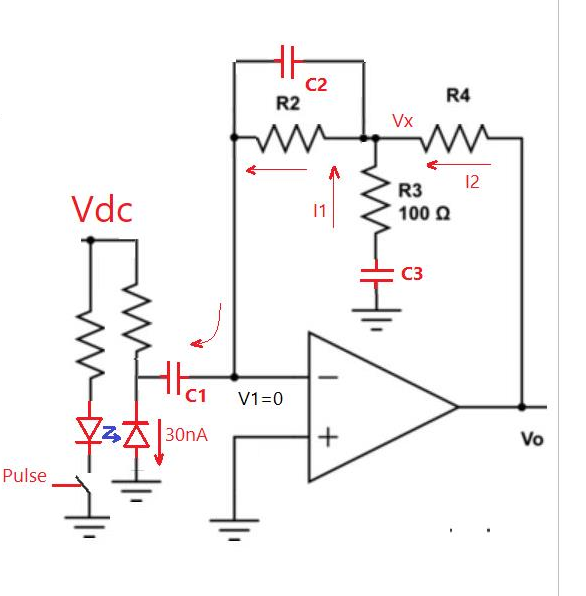 and the results are: 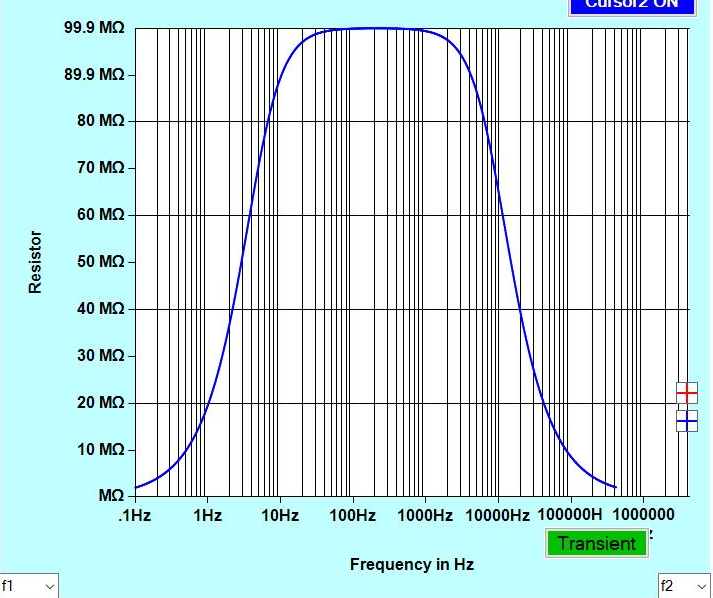 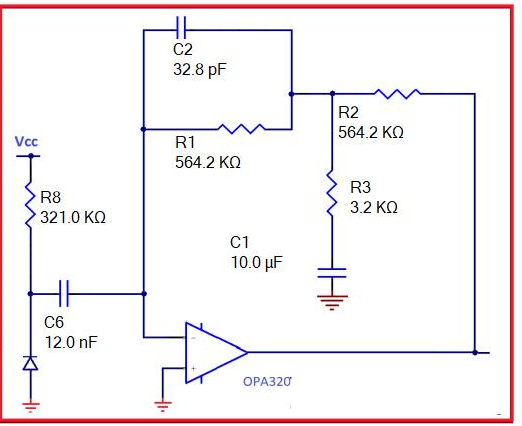