I've created a paper speaker through this tutorial, except instead of conductive thread I used copper tape for the coil. When I hook it up to a device that is known to give off lots of sound, the speaker works pretty well.

My problem is that when I hook up the speaker to my Arduino Uno and run the example tone Sketch provided in the arduino program, the sound comes out veeeery dim. I can barely hear it. I think this is because the arduino wasn't giving enough power to the speaker for it to be loud enough because when I used a 2.5v and 9v battery to power it, it was very loud. I also tested the power going to the speaker and, if I read it correctly on the multimeter, it's barely giving off any power at all.

I know I can use a relay attached to a large battery pack (like 9v) to give more power and get a louder sound. But I'm not sure how I would send the audio signals from the digital pin on the arduino to the speaker through the relay. Would it be appropriate to even use a relay in this case? Or would I have to use something else?

EDIT: Here's a pic of what I think it would look like in the end. I'm a total n00b with this, I apologize if I didn't draw it with the right connections or anything. I've never had any type of EE training. 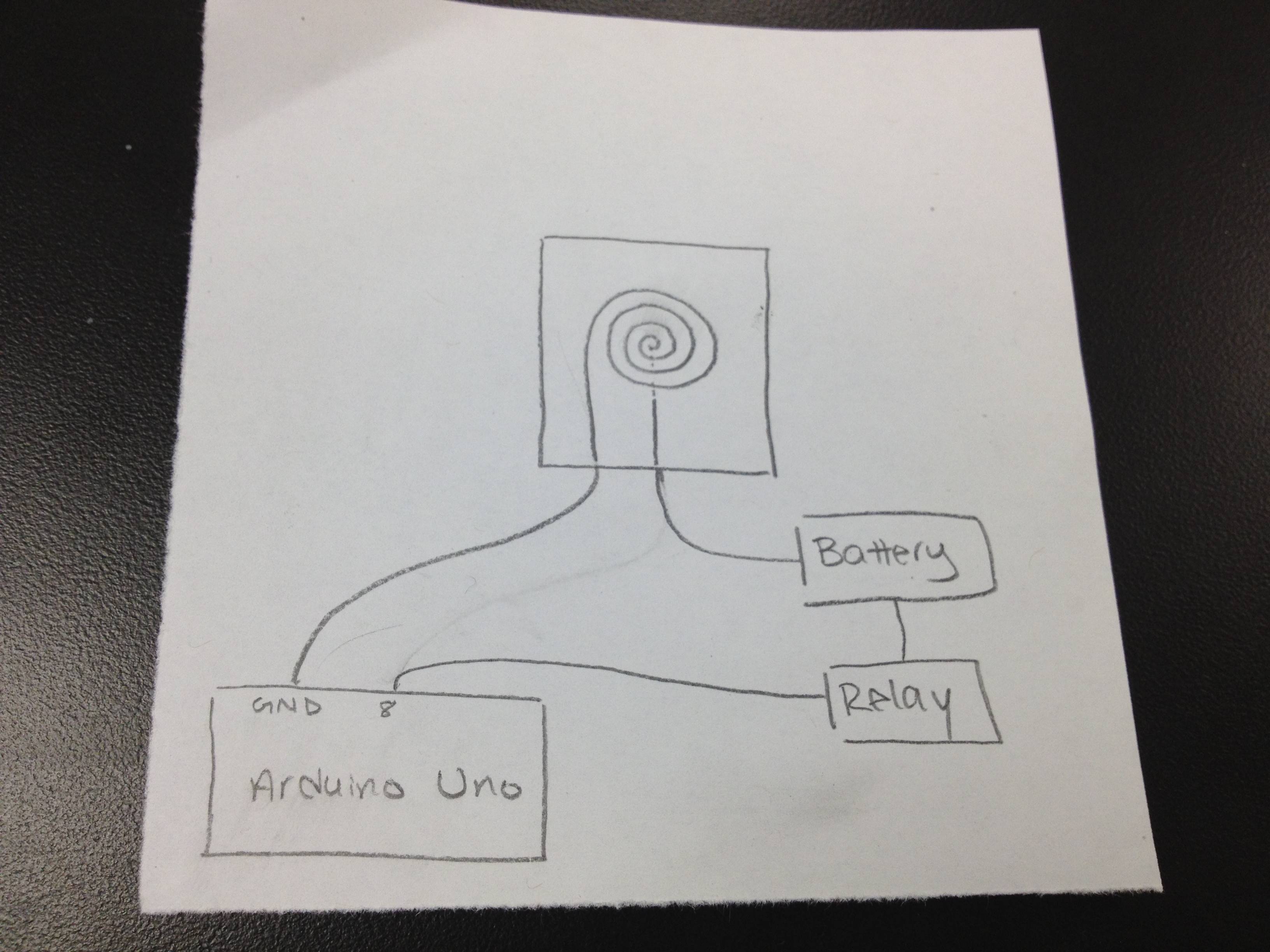 ...Let me know if any of that doesn't make sense. Thanks!

Your fundamental problem is likely that the impedance (primarily resistance) of this homemade "speaker" is far too low for the limited current drive capability of the Arduino pin. Your substitution of copper tape for the typically somewhat resistive conductive thread likely makes this even worse (at least in terms of presenting an overload to the driver).

As others have mentioned, using a relay as an audio amplifier isn't really workable. Actually a relay is fairly close to being an electromechanical buzzer; drive it with a signal of appropriate frequency and you will likely get more sound output from the relay itself than from this speaker of yours. Under the right conditions you might even get intelligible voice when using a relay as a speaker, but it will not be pleasant.

It may be possible to get sound out of your homemade speaker in one of two fairly simple ways:

While it is true the bipolar drive might be more beneficial for this type of crude speaker than for traditional ones, the complexity of building that (while avoiding the shoot through issue) is probably not something you want to tackle in a first attempt. Mounting the speaker substrate tensioned in something like a small embroidery hoop (or gluing it to a carrier ring) to increase its restoring force could be a worthwhile experiment.

You need an amplifier, specifically, an audio amplifier. You face two big challenges:

There are many ways to do this. If fact many textbooks have been written about audio amplification and amplifier design. I will give you one (of many possible) solutions to your problem and explain the theory of operation and design decision calculus.

The type of speaker element you are building is dynamic (meaning that it relies on electromagnetic, rather than electrostatic, forces to generate motion in the diaphragm). The effect it has on you here is that you need to generate a bipolar drive signal to maximize your audio output.

The fabric/paper design of your speaker does not provide a lot of restoring force so to make it vibrate optimally, you need to pull it towards your permanent magnet -- but then actively push it away (not just stop pulling it). To do that you will need to reverse the direction of the current flowing in the electromagnet (the coil attached to the textile diaphragm).

This poses a problem for the Arduino because, like most digital stuff, it runs from a unipolar power source -- it can only drive its digital pins "high" to the power rail, or "low" to the reference ("ground"). Current can only flow in one direction ("high" to "low", I'm simplifying the physics here, don't shoot).

Further, the Arduino's output pins cannot supply a lot of power and using them directly near their maximum SOR is a bad idea for long-term reliability, especially with a dynamic element that provides back-EMF (the speaker coil stores energy that it can return to the "output", temporarily making the output accept it back -- outputs, like bullies, don't like that).

To solve these problems, I recommend this: 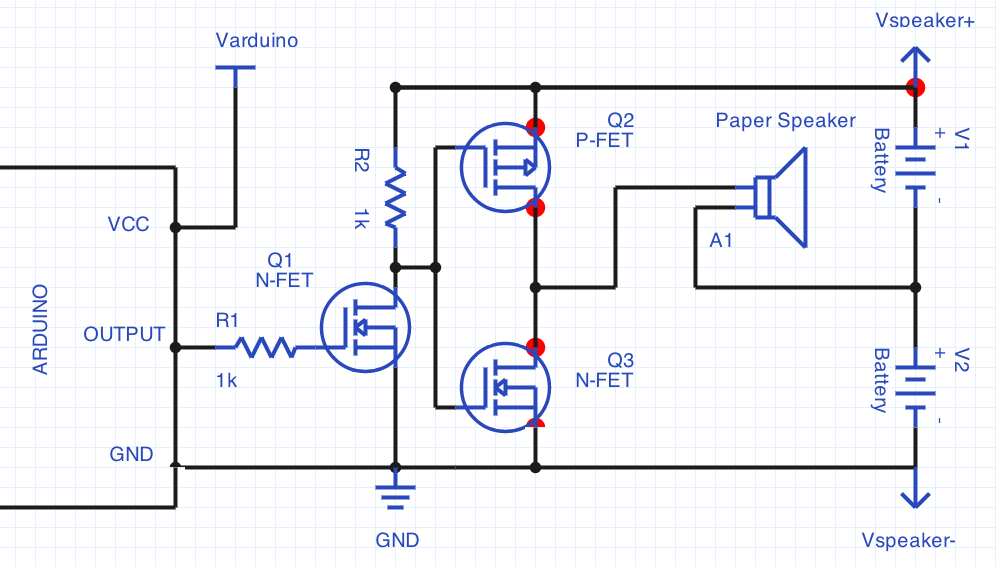 This circuit is simplified to improve clarity. There are some build details and features omitted. At the request of the community, I'll elaborate:

Use two batteries to create a bipolar power source. Now, from the speaker's perspective one battery produces a positive voltage and the other a negative one. Really it's all a matter of perspective (where you define "zero").

The rest of the circuitry between the speaker and the Arduino is a two-stage amplifier.

This amplifier is a common-source configuration (a class A amplifier if you must know ;-) ). It serves to amplify the voltage of the Arduino's output from it's unipolar-range to the bi-polar range of the speaker (the two batteries in series). If you want more detail just ask and I'll elaborate further.

A note about your "audio" signal

A digital output from the Arduino only has two states. Human audio is an analog phenomenon that has an infinite number of states. The signal you would naturally generate if you just toggle the output pin at your desired frequency is a square-wave that necessarily contains many additional frequencies (harmonics). This will result in your speaker sounding raspy (or sometimes described as "screechy"). If you want a more pleasant sound, you will need to implement class D modulation in your firmware.

A note about "shoot-through"

The square (two-state) drive of the Arduino in this application is significant. Many have correctly noted that a stacked driver configuration necessarily poses a risk that both devices could (will) turn on during the transition of the input signal. This is a well known behavior. Since the upper device connects to the high voltage in the system and the lower device connects to the low voltage in the system, if they are both on at the same time, the power supply may be shorted ("may" because "shorted", aside from absolute 0, has a relative meaning respecting the size and capabilities of the supply, circuit, and components).

However, the Arduino output transitions very quickly through the intermediate range between its two driving output levels. To better quantify the analysis, let's look at the edge:

Let's choose the NFET's to be Si4836Dy's and let's double those numbers to produce a theoretical worst-case PFET to go with it. This system could handle >22A from a >2.7V Arduino output (Arduino's are typically higher, so this is a nice worst-case). The larger current handling implies a large transistor, which will switch more slowly (which is worse for our predicament).

Let's say we are working with a 12V total (+/-6V). To make things bad, lets use a bunch of AA (EE91) in series. A good (bad) estimate of the ESR for this configuration is 20Ohms of internal resistance

Now we determine what (if any) shoot-through risk we face. Again, let's be ridiculously hard on ourselves. We'll assume a full-short (0 ohms) even though it isn't physically possible (the transitioning transistor channels have substantially more resistance than 0). That means that the batteries must absorb V^2/R Watts for 50uS -- or 360uJ on each cycle. Now let's pick a high frequency audio signal at 10kHz. That's 3.6J each second, but there are eight batteries --> 450mJ/battery each second.

A typical EE91 "AA" battery is designed to safely dissipate 5076J over an hour (the 1-C condition)... or 1.41 in a second. That equates to about a 3X safety margin after we took every opportunity to make the scenario unrealistically unfavorable.

For a hobbyist project, this approach proffers a number of advantages over other Class C schemes: It uses fewer components, produces strong bi-polar output, requires less tuning, is substantially more tolerant to component variation, and is simpler to build.

I know this is a dense topic and may be confusing at first encounter. If you still have questions, please follow-up and I'll try to elaborate.

Not the answer you're looking for? Browse other questions tagged arduino power audio relay or ask your own question.

2
audio amplifier without external battery
1
How to switch a 220V AC electric bulb using a relay through Arduino?
6
Driving a speaker directly through an audio DAC?
4
How to generate tones of different amplitude with Arduino
0
Noise in Audio (DFPlayer) when adding LED strip
12
Is “humming” normal in an AC relay?
0
Running Relay in parallel to switched neutral rocker switch
7
How can I deduce the power of a capacitor from its datasheet?