Is there a component that will OR the last 1-2ms of its input?

I need a component/circuit which will output 1 if a 1 has been input at any time in the last 1-2ms.

I could make such a circuit out of several shift registers, an oscillator and several OR gates, or I could use an MCU.

Is there a simpler (maybe analogue) alternative? I've considered:

but the 1V diode drop is quite big, making the circuit very sensitive to the bus being driven at less than 3V3. There may be slew issues, with the output component not recognising an edge.

You need a re-triggerable monostable and this can be made from a 555 timer. Waveform: -

555 circuit using a BJT to keep the timing capacitor discharged: - 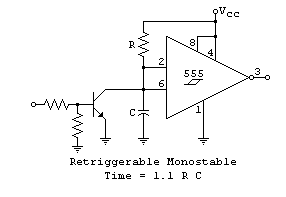 Not the answer you're looking for? Browse other questions tagged 555 integrator edge or ask your own question.

0
How to turn a pulsed signal into a continuous one?

0
How long will this low duty 555 LED blinker last on batteries?
1
Identifying the “Preset” Component in this 555 Monostable Timer PCB
3
Best way to sync LED's to light NES figures on a wall clock?
2
555 Input Impedance
4
Astable 555 frequency problem
0
Resistor that changes resistance with clock input
3
General circuit debugging techniques, and my 555 timer in particular
1
The 555 regulator that won't regulate
0
How might I increase incircuit voltage from 2.5 DCV to 3 DCV