Background info: I am using a 4 layer PCB stack: Signal, Gnd, Signal+Power, Signal (mostly ground). To avoid out of question issues, I use this set-up due to a reference design on Texas Instruments as they use the stack-up in the same format.

All the unused areas are ground on this PCB, I also use via stitching on the edges and on the signal traces.

My question is that, is it better to be generous on the ground vias where no signal or power traces are used or is it better to keep them as solid as possible? (please note that un-used areas are ground only on all layers). 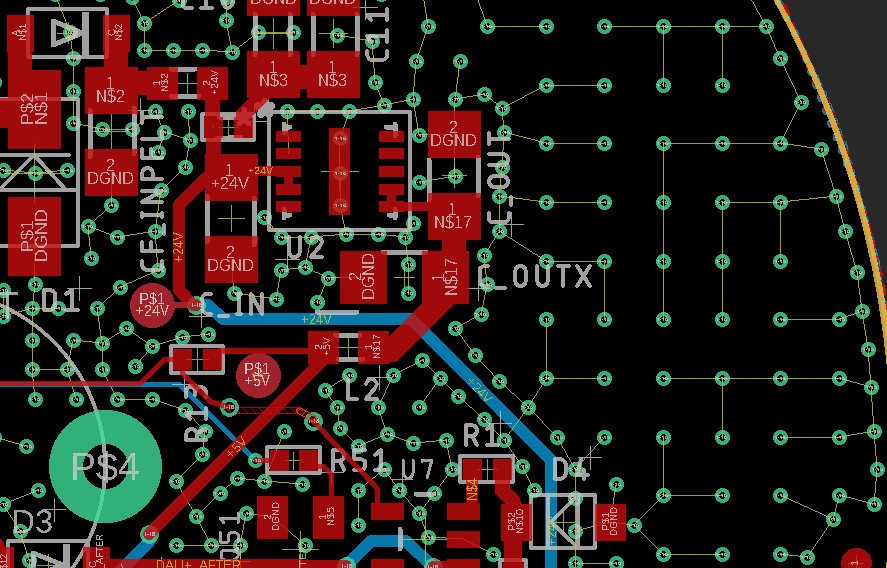 Essentially via stitches only need to be spaced at about 1/20th of the minimum wavelength.

Where Î» (lambda) is wavelength, v is frequency, and c is the speed of light.

\$\frac{300\text{Mm/s (speed of light)}}{868\text{MHz (/s)}}\$ is a wavelength of 0.3456m. A twenty-eth of that is 17.2cm. So with vias spaced at 17cm and significant ground copper, the top surface would appear almost completely reflective at 868MHz. Excessive vias can incur extra costs from the board manufacturer as the tiny drills wear out rather quickly and/or break, leading to rejects. For a few boards they may not care, but they will for many boards.

Would [stitching] have a positive effect on the PCB (EMI/EMC, better return paths, ..) or would it be a negative thing (noise source, cross talk, ..)?

This is a huge question. Generally, if you have an RF transmitter on the board, the same-side external copper (pour) should be ground, with stitching as above. Most modules have a "keepout" section where nothing should be below it - stitch both sides to ground around that area. If in or near a reflective source (such as in a metal box, on a metal table, etc.) it may be necessary to ground-pour the reverse side also. It's okay to run a few traces on top/bottom, but remember the wavelength - a blatantly exposed trace which is 17cm long will start to behave like an antenna at 868MHz.

If using a trace to connect an SMA or antenna to the RF module, all kinds of special requirements are needed such as impedance matching (width, thickness, and distance of trace to ground, possibly impedance matching components also), mitered corners, ground stitching around the entire trace, etc.) Take a look at The Signal Path for examples of very high frequency design and the details involved.

As for EMC, return paths, noise, cross-talk... these are all separate concerns. I'll give a summary here.

How would I know if I'd need to use [via stitching] to reduce inductance?

This goes in-line with return paths, noise, and crosstalk. In general, mitigate this by designing the PCB better. This may mean starting over several times with component placement to achieve shortest routes. Keep traces short, use appropriate decoupling caps near switching devices, and use a ground pour on the RF side.

Using a fast oscilloscope, you'd see high-frequency ringing at the peaks and valleys of logic transitions, HF oscillations on power rails, etc. Anything like this might be due to parasitic inductance and capacitance. These form an unintentional L-C tank circuit. Everything conductive has some amount of each. Both can be mitigated by using better components, shorter traces, more space between traces, not looping traces, etc. If a via stitch to ground is a shorter path than a trace, then it will have less of both.

Note, it may be tempting to via-stitch to ground on the pad of a device, such as a decoupling capacitor. This is not advised... it may work for a hand-assembled board, but machine assembly and reflow will tend to "tombstone" or stand these up on their end as the via will suck the solder away from the pad.

Not the answer you're looking for? Browse other questions tagged pcb-design ground emc pcb-layers via or ask your own question.

45
The best stack-up possible with a four-layer PCB?
8
50MHz SPI PCB routing, use vias or resistors?
14
Should the unused areas on the top layer of my RF PCB have ground pours?
0
Which is the best way to ground the top layer copper pour on a PCB?
1
Via Stitching on 2 Layer PCB when top layer is not fully ground pour
5
In a 2 layer PCB with a top layer densely populated, from an EMI & EMC point of view should the ground plane be on top, bottom or both and why?
0
Ground vias on a PCB
5
Should I remove extra unused copper from a power plane in 4 layer PCB?