I've read some papers on voltage collapse, and it seems to be described as the loss of a steady state solution for the system equations. Where the Jacobian matrix is singular, and voltage is monotonically decreasing.

My understanding is that if the voltage is monotonically decreasing, and bounded below by 0, then this must necessarily converge to a single solution greater than or equal to 0.

Wouldn't this limit then have to be a steady state? (A stable equilibrium, even?)

It seems to me that these statements are contradicting each other: 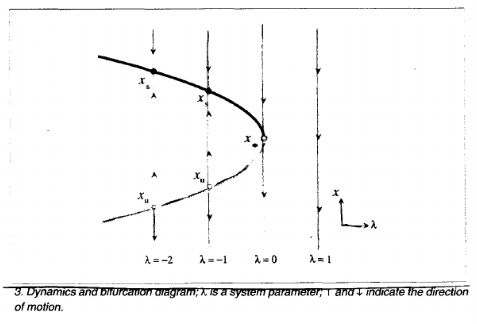 The figure is taken from this paper:
https://www.researchgate.net/publication/3345120_Voltage_Collapse_in_Power_Systems

Given the Jacobian, what do you know about the total system energy trajectory?

I am seeking to understand the Jacobian uses in a system model.

With the energy heading toward zero (assumed), then there no longer is energy being supplied to the system, or an enormous dampener has appeared (possibly a SHORT circuit or an OPEN circuit). Are these thoughts accurate?

If a finite dampener has suddenly been inserted, then the circulating energy will be dampened, and current and voltage amplitudes will be altered, until the new dampener losses are accommodated and a new steady state vector is reached.

From what I've read, the power organizations seek to avoid total voltage collapse, and various industrial users are designated as "discretionary". Thus these users will the FIRST energy consumers to be SHED, to be DROPPED, to be DIS_CONNECTED from the grid.

In dropping certain users, the residual energy in the various rotating masses will be adequate to serve the remaining loads.

Realize you have energy producer rotating masses, and energy consuming rotating masses (motors), thus the enormous mass ( many thousands of horsepower, with spinning armatures) of motors may assist in stabilizing the grid.

In load shedding, the grid is forced to react to energy transients.

This is exactly what an adaptive_communication link does, with echo cancellation or using high-pass filters to reverse the losses of low-pass wiring and PCB_dissipative copper surfaces and insulation loss tangents.

Thus we can examine how the grid system becomes adaptive, with pre-selected loads_to_be_shed, with a time constant of seconds.

I was out driving yesterday, and spotted 7 new towers on the horizon. These new structures have the height and aspect ratio of the exhaust_cleansing systems attached to the exhausts of natural_gas_powered jet_turbine power generators.

Key point is the reaction time of a jet_turbine natural_gas rotating mass, under computer control. Compared to the huge thermal mass of boiler/water.

The natural_gas system NEED NOT CHANGE ANYTHING ROTATIONAL. There is no inertia to alter.

A 0.5 second change in the natural_gas throttle is the only adaptation to a huge and sudden demand upon the grid.

Thus natural_gas power plants, and fields of solar panels with their DC_AC converters needing only 1/2 power cycle to synchronize to the grid, have a wonderful potential in stabilizing our power grids.

Regarding Fig 3 and your questions

One thing that might be the issue is the meaning of \$x(t)\$ and \$\lambda\$, while \$x(t)\$ is the state of the system (some signal), \$\lambda\$ is some parameter of the system, and for nonlinear systems, that change in parameters can lead to systems that have no equilibria. And in order to be stabilized you would have to come up with some control law that can (re)create the equilibria of the system.

My understanding is that if the voltage is monotonically decreasing, and bounded below by 0, then this must necessarily converge to a single solution greater than or equal to 0.

It should be clear that for \$\lambda > 0\$ there will be no equilibrium. One example of such system would be

This only means that the trajectories go downwards until they land in an equilibrium (if there is one, otherwise they grow unbounded).

Bounded below by zero

Notice that this is a mathematical model, by \$x(t) \xrightarrow{t \xrightarrow{} \infty} -\infty\$ you should read trouble, regardless if it's a positive or negative infinity. The real system will not go to infinity (taking infinity energy), but it will probably crash/break/hit its limit hard.

All that said, this model is not really a model of a power system, at the paper they write that

Let’s look at a prototypical example to introduce the essential ideas. Consider a nonlinear system with a single state variable, x, and a slowly varying parameter, h. The dynamics when h = -2 are shown by the corresponding vertical line in Fig. 3.

So they are not talking about a model that directly explains a power system, the purpose is to present a bifurcation diagram and show how equilibria move as you change parameters. It also shows that those equilibria can disappear or change in number as those parameters change.

The two following figures refer to actual power system, even though they don't present the model/equations. Looking at fig 5 you will see the problem that once \$\lambda \geq \lambda^* \$ either the system will have a unstable equilibrium or no equilibrium. At \$\lambda = \lambda^* \$ any perturbation will make \$V \xrightarrow{} -\infty\$ (and yes, the real thing will stop at some point, probably zero, but the authors did not add an equilibrium at zero, so mathematically it won't). 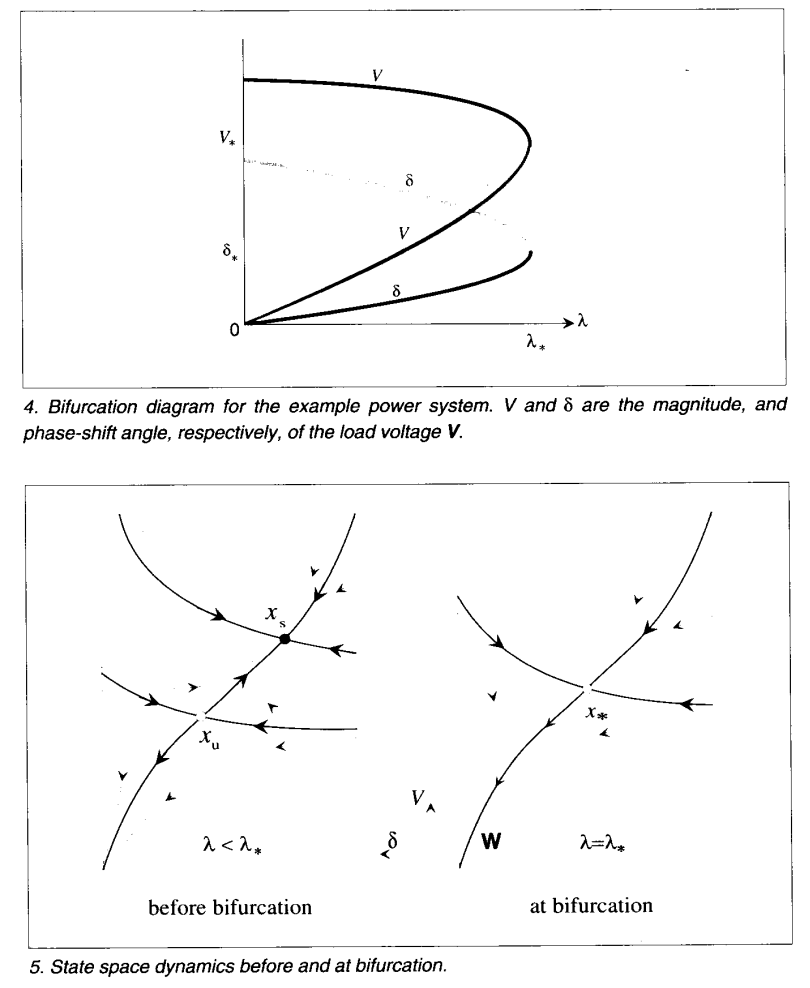 Not the answer you're looking for? Browse other questions tagged voltage power circuit-analysis simulation power-engineering or ask your own question.