What is wrong with my buck regulator circuit using the RY8310 IC?

A component in a larger circuit I've designed is a step-down regulator circuit. It provides an output voltage of 18V from an input of up to 29V. For no other reason than the PCB manufacturer had it in stock, I chose the RY8310 buck converter.

I read the datasheet and believe I followed the 'recipe' to obtain 18V output. However, when I ran my initial test using 20V input, there was a brief moment after I closed the Enable switch, where I saw around 300mA flow and then nothing. I'm pretty sure that I've toasted the circuit, but since it's built using SMDs it's going to be pretty difficult for me to isolate which component(s) failed.

Since it's a pretty simple circuit, I'm hoping someone might be able to spot where I might have gone wrong. Here's a link to the datasheet for the RY8310, and I've included an image that shows

I appreciate any help with figuring this out. 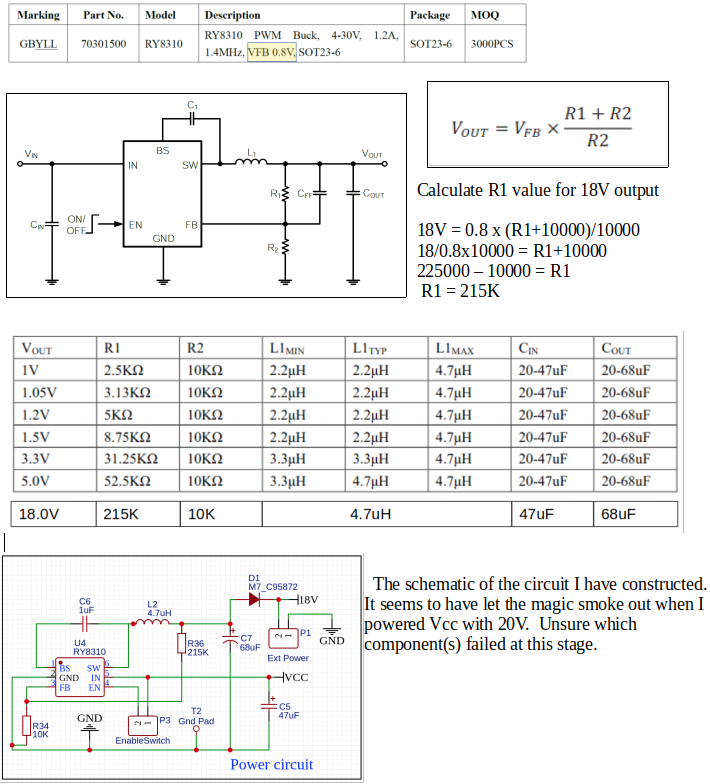 As requested, here are the details of the caps and inductor in the circuit.

Based mainly on feedback from @Adam Lawrence, I've made changes to my schematic and posted a copy of this. I've also taken a closer look at the failing PCB and can clearly see that a side of the tantalum cap has blown off, and the Vcc track between the buck converter IN pin and the cap has been overheated. I've attached a picture of the power circuit part of the failed PCB, together with the PCB layout image.

I'm still puzzled by the need for a bypass (1uF?) ceramic cap on the Vin pin of the converter - there's already a 47uF cap between this pin and ground, so is the 1uF still required? Does it serve a different purpose to the larger cap?

Id appreciate feedback on the changes I've made which comprise

If the basic components I've changed are deemed ok, I'll then populate the PCB and share this for further comment on component placement before I proceed with re-manufacture. I will also look at downstream protection for the board once I've got consensus that the power circuit is likely to work.

Many thanks for feedback. 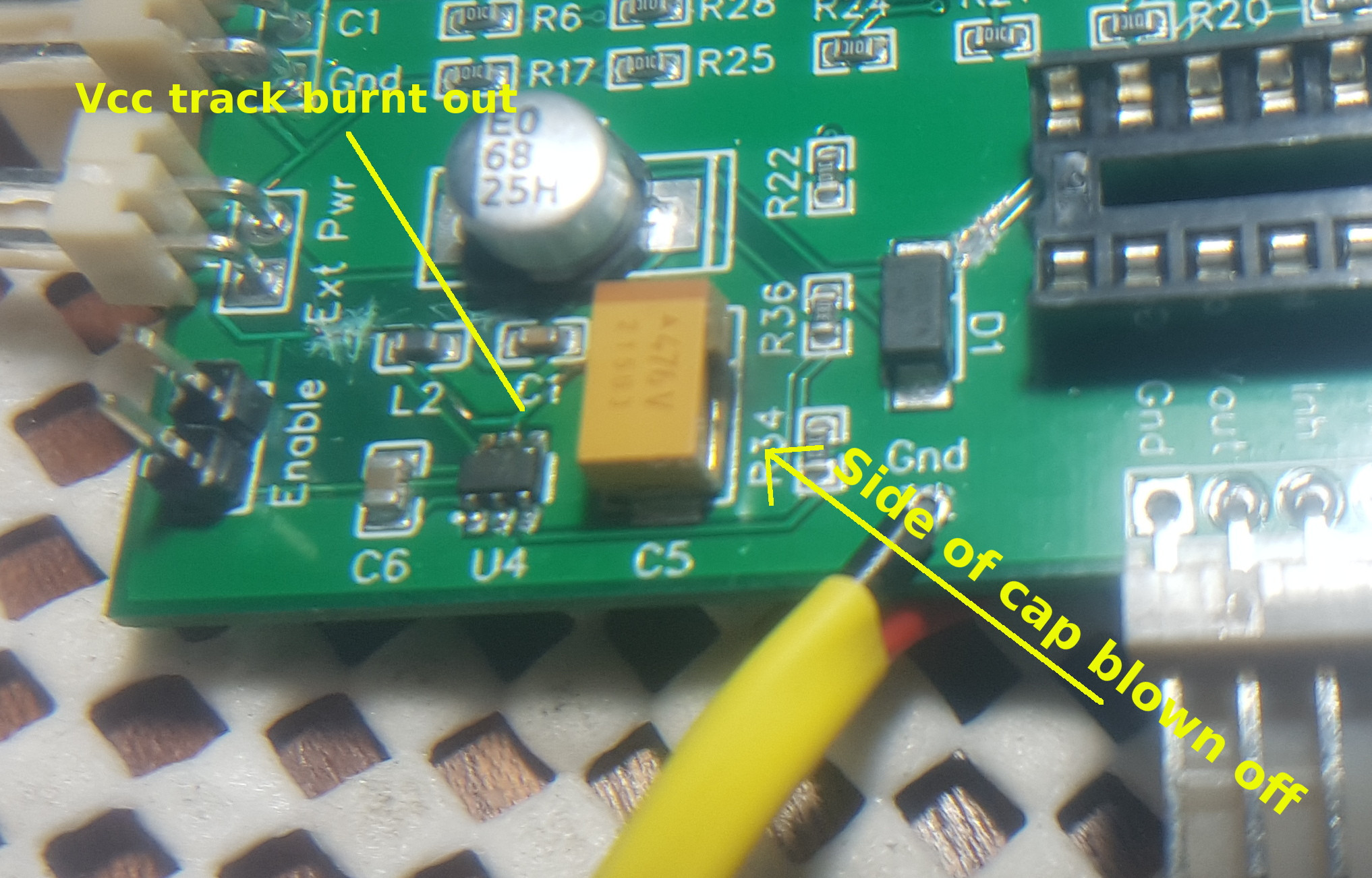 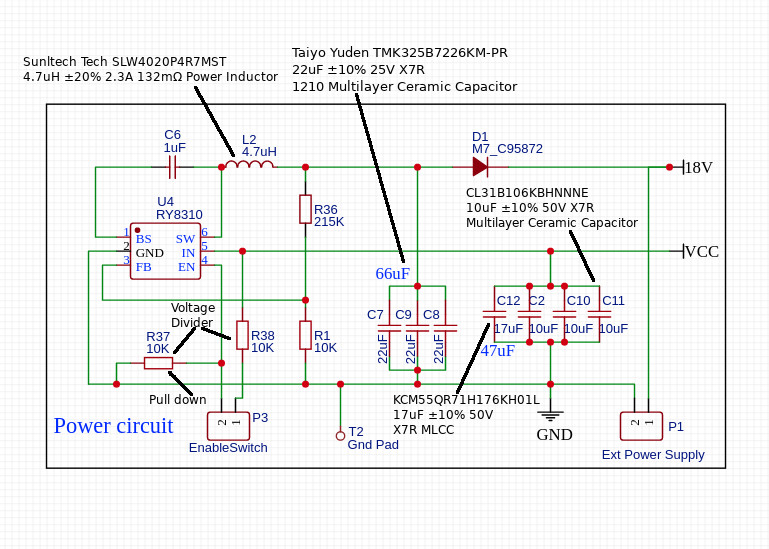 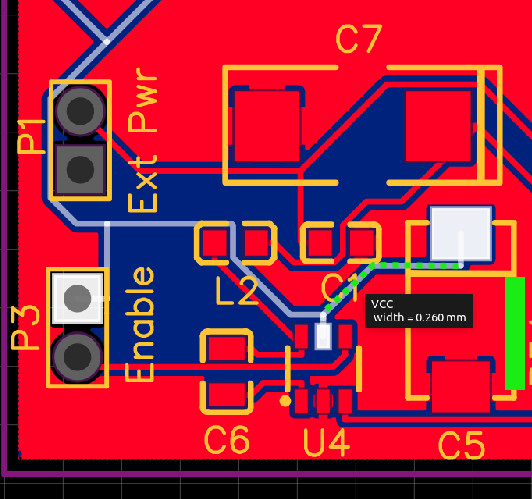 I will offer some general troubleshooting advice:

Further comments based on your edit:

Decoupling capacitors are critical not only for bulk charge but for frequency response. A ginormous electrolytic capacitor likely will not perform as well as several small paralled ceramics for instantaneous energy supply, again due to ESR and ESL. So, yes - a 1 microfarad decoupler serves a much different purpose vs. a 47 microfarad.

Your old layout needs rethinking. Both the IN and SW traces seem very small to me and the switching node (SW / L2 / C7) looks very loose (lengthy). The IN trace should be larger, and the nodes between SW / L2 and L2 / C7-C8-C9 should be as compact as possible to minimize EMI and avoid excessive ringing due to parasitic inductance.

Bonus info: TI has a good reference to buck converter layout - refer to SLYT614 for some guidance. Below are some excerpts. Your application is slightly different with a low-pin-count device but pay attention to the sections on powertrain layout and single-point grounding. Start with the most crucial elements - input cap, inductor and output caps - then add the rest of the circuitry. Keep noisy ground areas away from sensitive areas like the feedback divider.

Step #2. Place and route the inductor and SW-node snubber

Step #3. Place and route the output capacitor and VOS pin

Step #5. Make a single-point ground and connect to the rest of the system

Your (ferrite) inductor does not seem to be suitable for this power application. Neither its inductance nor its rated current meet the required specs. Essentially you are saturating your inductor very fast.

According to your application, you would need an inductor with the following specs:

The 1.3 factor accounts for the ripple current and the 1.5 factor for safety margin. You could increase the current driving capability at size and price costs.

Not the answer you're looking for? Browse other questions tagged buck switching-regulator or ask your own question.