Calculation of switching transformer at 100kHz

My desired parameters is: approx. 315 V primary (after 230V rectifying), 12V secondary and 1000 VA of power. and full-bridge switching mode.

I´m totaly out when comes to switching transformers. What material should I use? Im not sure if Ferrite core E55 is enough

In the example below I used an E55/28/25 core set and 3C90 core material just to take a stab at the viability of the design. I'm not really focusing on the numbers; rather I'm taking you through a form of procedure that gets you somewhere close to being able to wind the primary winding. My figures below are just as they come out of my calculator and I'm not vouching for them being correct when I first post this answer. They need double checking and any errors pointed out to me will result in this answer being corrected.

Regular AC power transformers (50 or 60 Hz) have a primary inductance. After all, the primary is just a coil of wire wrapped around a magnetic core and, you don't want the current taken by that inductance (secondary unloaded) to be "tens of amps". So, you wind the primary with enough inductance so that the residual current taken (called magnetization current) is not excessive.

If it is excessive then the core will saturate and you end up in a mess.

It's the same for any transformer operating at any frequency - you have to avoid core saturation and it's the magnetization current that causes core saturation. It's got nothing to do with load current because load current magnetic fields produced by primary and secondary cancel out.

In effect, the magnetic field in the core is ONLY due to magnetization inductance and the current that is taken by that inductance due to the applied primary voltage.

So say you chose this core set: - 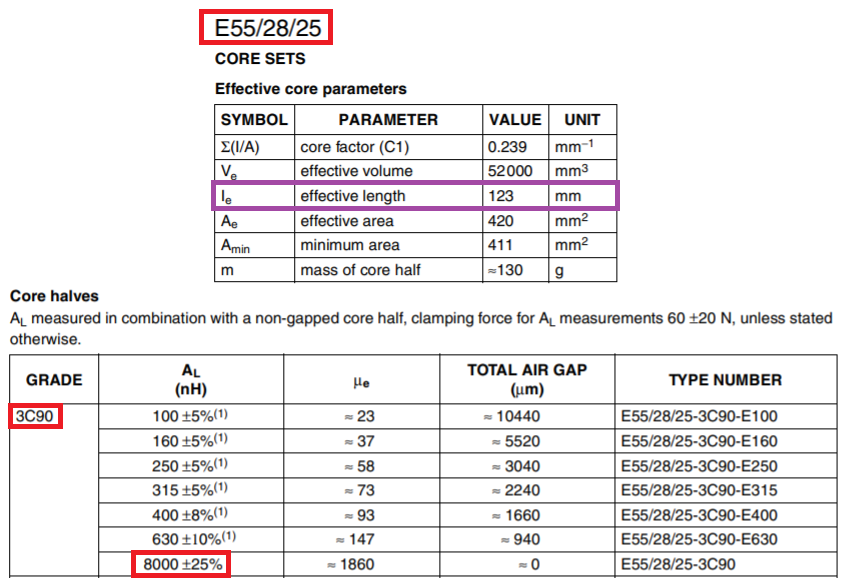 But how much inductance do you need?

That would need about 25 turns i.e. 25 squared x 8 μH = 5 mH. This is just a ball-park estimate to see how things shape up. The next thing to calculate is how much peak magnetization current we get voltage is applied over 5 μs. I say 5 μs because that is what half a cycle at 100 kHz is.

We can also say that because the circuit uses a full-bridge driver, the current will start at -Ipk and rise to +Ipk over 5 μs. This means that for 2.5 μs the current changes from 0 to +Ipk. We know the applied voltage (315 volts DC) and we know the ball-park inductance (5 mH) and we know Faraday's law of induction: -

Will this saturate the core?

This can be found by looking at the BH curve for the 3C90 material I chose: - 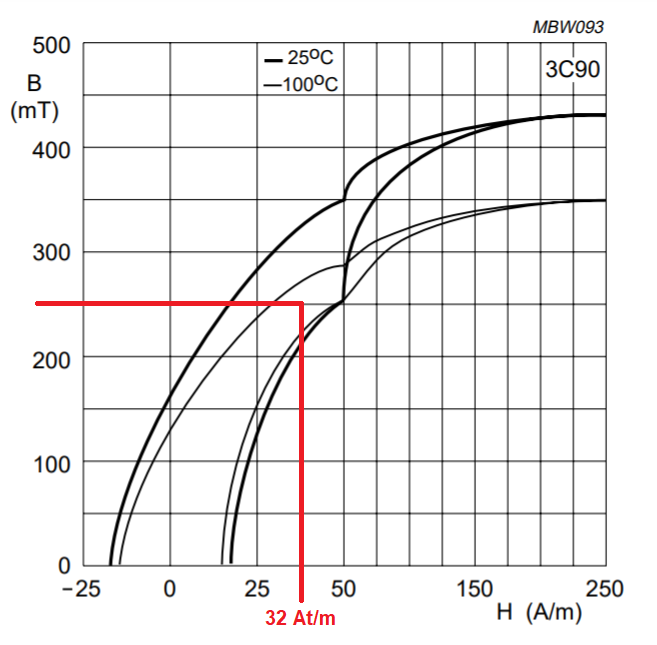 I reckon the peak flux density will be about 250 mT and that's OK in this application.

However, the secondary winding is only going to be about 1 turn i.e. 315/25 = 12.6 volts and, after rectification, this produces circa 12 volts. But this is just at an input voltage of 315 volts (~230 volts AC). If you need this to work at lower voltages the secondary turns need to be higher and you need to control the transformer primary with PWM to make the average voltage smaller at the higher supply voltages (requires a secondary inductance to average the voltage out).

Anyway, that's how I'd start to design the transformer then, I'd look at the range of supply voltages that the output is meant to stay regulated over. Then I'd look at what PWM chip to use to control it and what output inductor is required.

Not the answer you're looking for? Browse other questions tagged transformer switch-mode-power-supply full-bridge calculation or ask your own question.