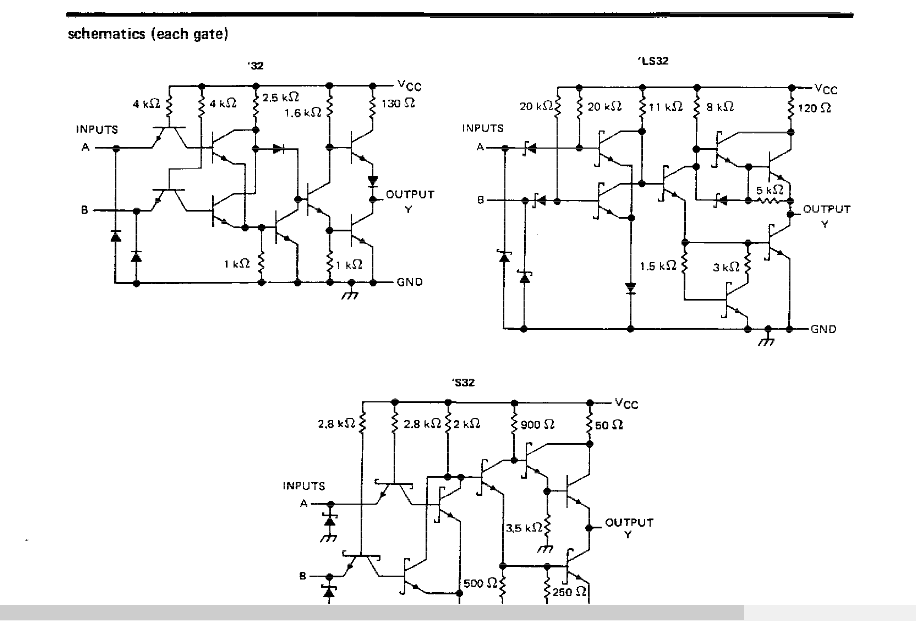 Hi, I have included the image of the schematic of the Texas Instrument 74LS32. Basically the chip consists of 4 OR gates and the schematic shows the logic how 1 of those gates is set up on the chip. In the figure shown on the LS32 version (the RHS schematic) is a transistor made up of a squiggly S on the body of it where the straight line would normally be, compared to the normal illustration of a transistor illustrated in the 32 schematic(LHS schematic). The same thing again with the diodes the ones on the right have squiggles and the ones on the left don't. I think I remember that this is a reverse breakdown diode? (but would like confirmation) I have a theory that this is illustrating a PNP transistor? But am not sure. Also I was wondering what is that italicized upside down pitchfork thingy right before GND sink? Insights would be appreciated.

That is an NPN transistor with integrated Baker Clamp. It can be known as a Shottky Transistor Wikipedia. 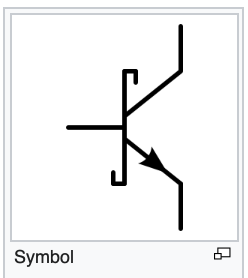 It is equivalent to this: 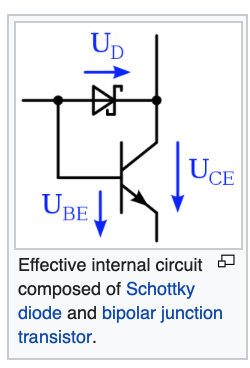 The diode between the collector and base prevents the transistor from saturating - if the collector attempts to go less than ~0.5V it will divert charge away from the base.

By preventing saturation the transistor can turn off more quickly because there will be less stored charge in the base region.

The diodes shown with the similar embellishment to the symbol are Shottky diodes. They are not to be confused with a zener diode that usually only have the bracket on one side, a backward diode that have them pointing the same way outwards or a tunnel diode where they both turn inwards.

Shottky diodes are diodes where one of the electrodes is a metal, rather than both being semiconductor. The turn-on voltage is significantly less and they have essentially zero stored charge so they are very fast.

The three pronged symbol is a connection to ground or in the case of an IC it is to the substrate. It also often means the connection to chassis in equipment or old schematics.

Not the answer you're looking for? Browse other questions tagged transistors diodes schematics logic-gates texas-instruments or ask your own question.

33
Schottky transistor, Not sure I understand it?

4
Applets illustrating the operation of diodes and transistors
5
Current limiters using transistors and diodes
1
Reverse biased breakdown
0
Reverse breakdown voltage setting for the diodes in a solar cell model in SPICE
7
Why are OR gates using transistors different from OR gates using diodes?
2
How do zener diodes, silicon diodes, and base-emitter junctions differ in reverse breakdown mode?
16
Why do two reverse diodes represent the logic gate AND?
1
Transistors and Diodes maximum current per size