How can a system reach its steady-state if the I-action of a PID controller, u(t), doesn't go to zero as the system approaches its desired value?

The I-action of a PID controller, which integrates the error over time, results in the control signal:

This means that, when the system reaches its desired value and the error reaches zero, the control signal is a constant. So it is still there and larger than 0, while the P-action and D-action both are zero and have no effect anymore. So what is happening here exactly? Why can the system reach its final value if there is always a control signal active? Or is this the reason why overshoot happens? Is it that the error gets smaller once \$e(T)=r(T)-y(T)<0\$ and the integral gets smaller?

Imagine a real system such as an oven. You want to maintain 350°F so that your cookies will be properly baked.

The input to your controller is the temperature sensor.

The output to the oven is the percentage the heaters should remain on vs. off.

In order to maintain a constant temperature, the output must be non-zero, and ideally (without you opening the door or line voltage changes etc.) will be constant.

Overshoot happens because of the closed-loop system dynamics (underdamped), and it can also happen because of integral windup, which is a nonlinear effect.

why can the system reach its final value if there is always a control signal active?

One case where you could have a \$u(t)=0\$ at the steady-state is if your system is an integrator, with

Or is this the reason why overshoot happens?

So I used again the example system

which resulted in the following step response. Notice that at all those red boxes we have \$e(t)=0\$, and they are the inflection point of \$u(t)\$, but none of them are the steady-state (when y(t)=r(t) and stays so for any future time). And that should point that your remark about "[u(t)] is still there and larger than 0, while the P-action and D-action both are zero and have no effect anymore." is only correct at the steady-state, because at most points where \$e(t)=0\$ the P-action will be zero, but not the derivative one. 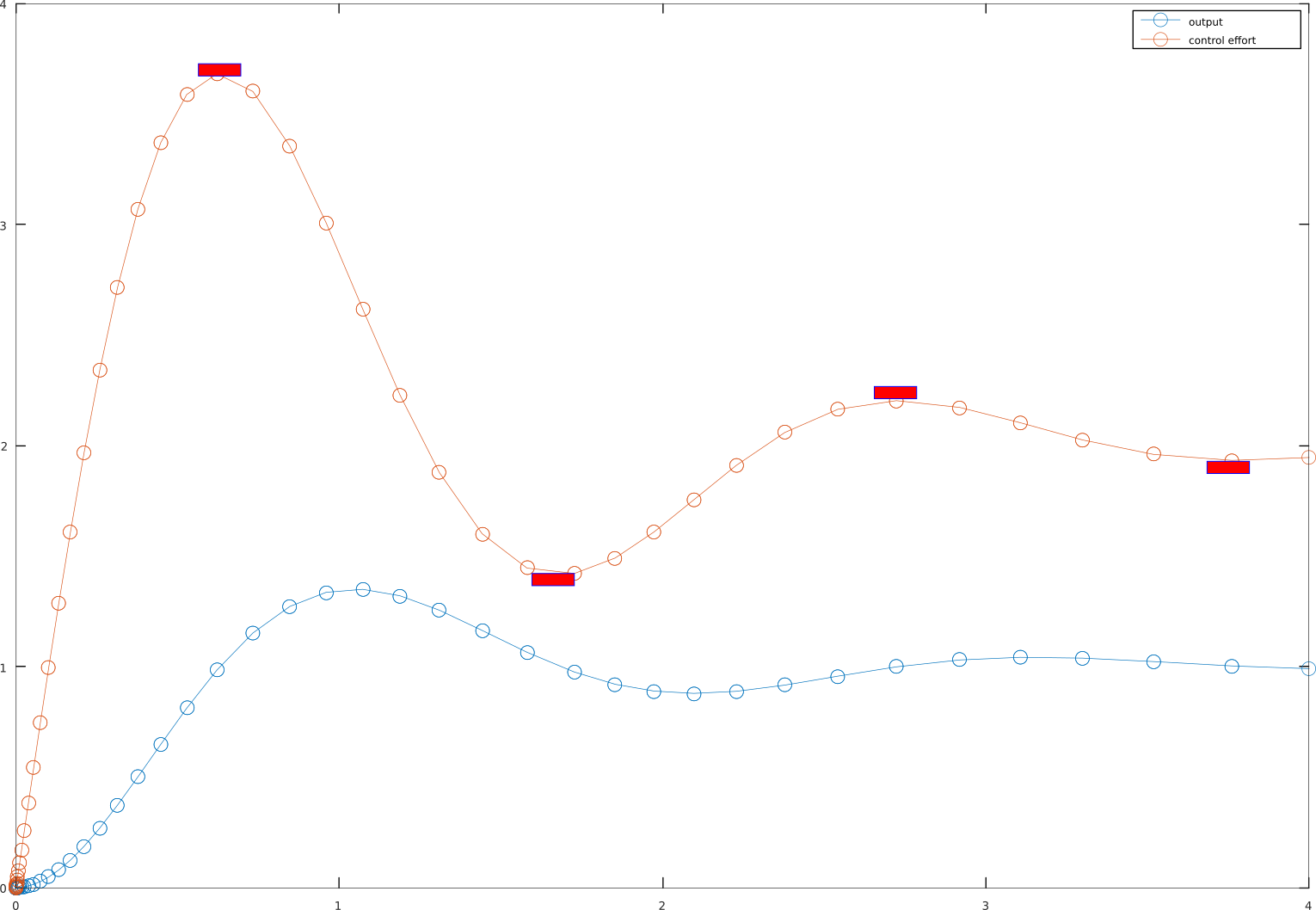 First it would be better to say the "integral gets closer to the steady-state control", since it doesn't always means getting smaller. There will be situations where the error will not decrease after the inflection point, specially if there are delays. But for the system that I used as an example it does so.

3
Understanding the flow of a PI Controller?

4
How to stabilize this control system?
4
PID regulator steady state error problem
1
Why can I ignore the "imaginary" value from the gain of my system?
17
PID algorithm: how to account for fast input value changes after a long delay
10
How to tune a PID controller to a nonlinear process
0
PID controller quickly drops command signal and quickly rises it when initially given control?
2
How can infer instability from the frequency response of control system?
0
Logic behind a PID controller?
1
PID: Should one introduce limit to only some parameters?