How are all these Cree LEDs damaged?

I am building a high-powered flashlight using four Cree XHP70.2 12V LEDs, but just after the final assembly of the flashlight, they all started malfunctioning in some way. See the images:

One LED is is half bright and half dim along a diagonal: 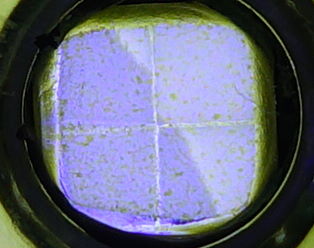 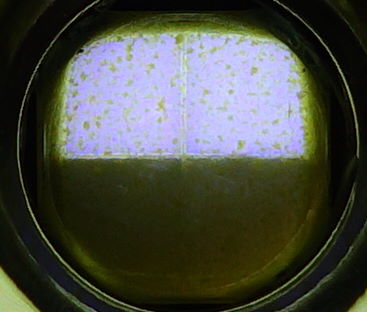 And the last LED does not light up at all. These are images of the whole assembly (with reflector removed): 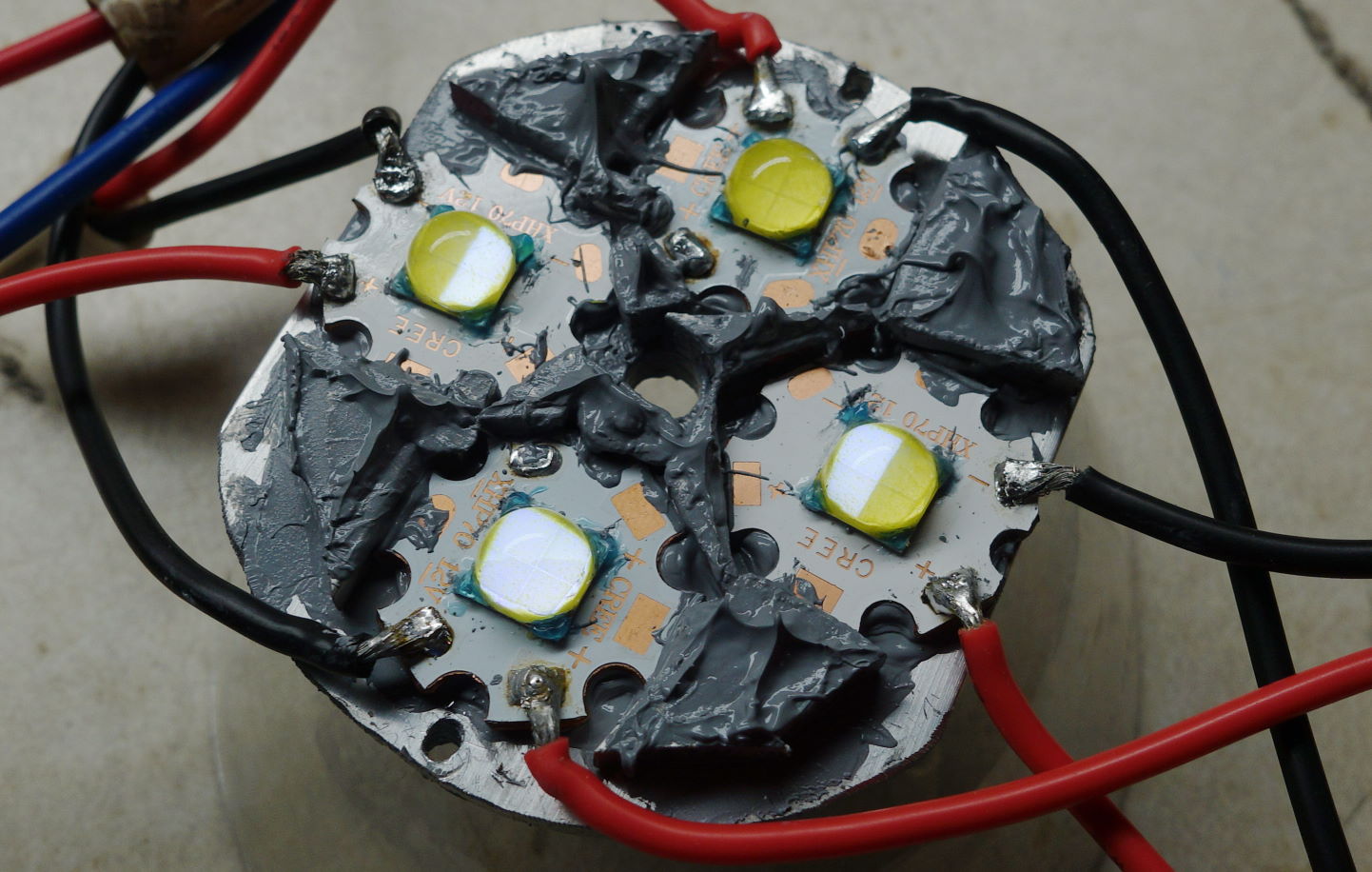 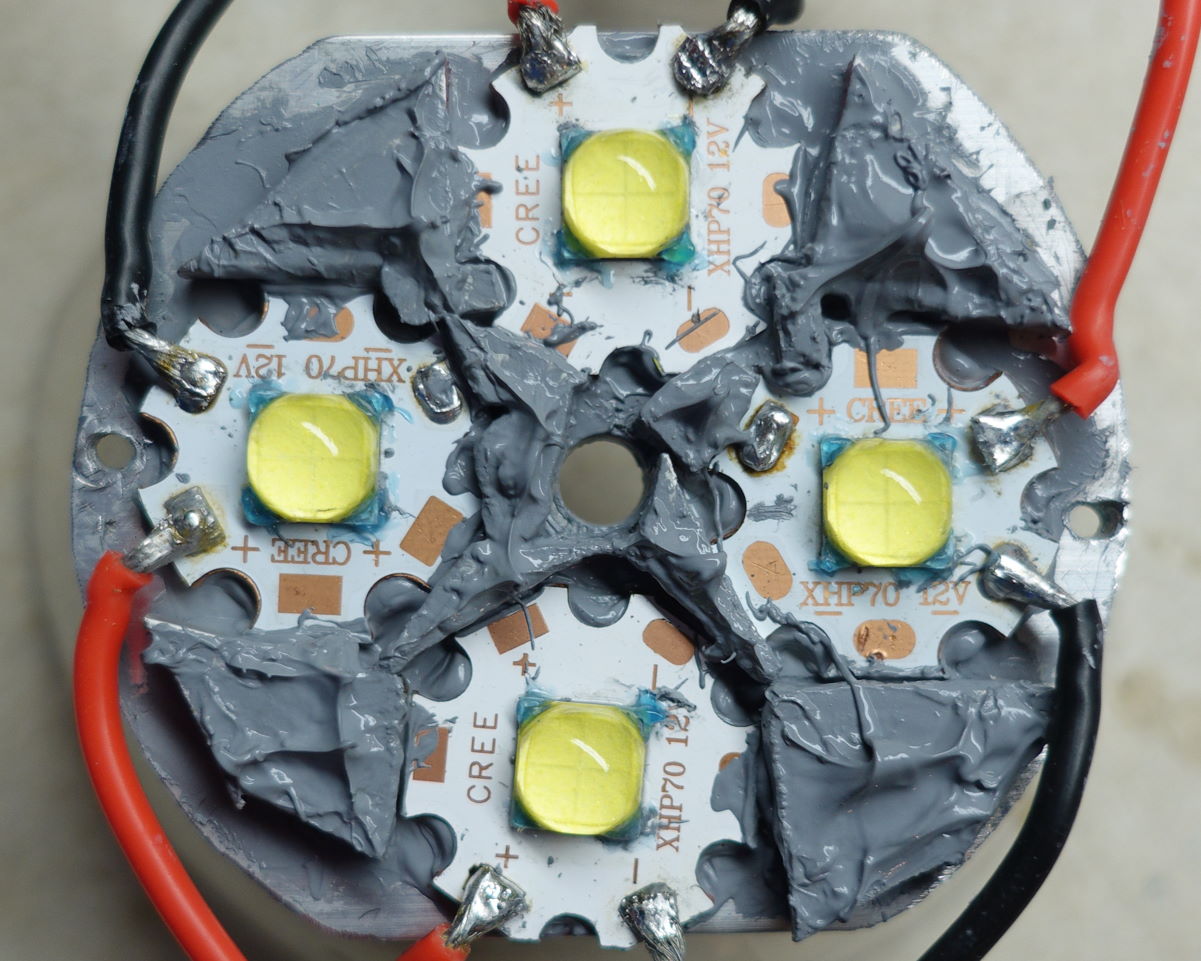 All of that gray gunk is insulating thermal paste. The blue dots on the corners of each LED are beads of silicone glue (in an effort to prevent short circuits through the exposed corners.) All of the LEDs are wired in series.

I've checked every combination of leads, and there are no short circuits. There is also no conduction between the leads and the copper bottoms. All of these LEDs used to work fine. My best guess is that I somehow damaged them with excessive pressure after mounting the flashlight reflector on top.

Are there any better explanations for why each LED is acting the way it is? How can I fix whatever damage has been done?

I tested each LED on its own, and they all work properly. Somehow, the combination of all of them on the aluminum plate messes things up.

I found the problem. After slightly moving each LED around on the aluminum plate, different parts of the LEDs flashed on and off. The layer of copper that composes the circuit in each PCB is exposed at the edges, and was contacting the surrounding pieces of aluminum.

The LED that had a diagonal dimmer part was damaged by putting too much pressure on the dome. I guess I'll just have to rip the dome completely off that one.

8
How to find a faulty bulb in a Christmas lights string
12
How do LED light bulbs work?
1
How do I wire 6 LEDs to a 9-V battery?
5
How are multi LED flashlights wired to control current w/o resistors or regulator?
13
SMD LED polarity marking: is the cathode marking standardized?
0
How does this string of LEDs work?
9
How can I use 5 LEDs for additive colour mixing using the CIE 1931 Chromaticity diagram?
25
How are LEDs considered efficient?
56
Are LEDs better than we think?
2
Practical issue aiming non-visible infrared light at a reflector