I have a very simple circuit. It’s just an n-channel enhancement MOSFET where Vgs is being driven to 9V and a relatively small 9ohm resistor sits between the 9V battery and drain terminal.

The way I went about the analysis was to assume the MOSFET is saturated and then use: Id = Kn(Vgs-Vt)^2 where Kn is the transconductance parameter (W/LμC_ox) and Vt is the threshold voltage. For a Kn in the order of 1mA/V^2 and Vt approximately 1V, we get a drain current in the order of 8mA. These are all relatively standard values (I think).

When I simulate the circuit on LTSpice the current is in the order of 1A and it appears the simulation just treats the MOSFET as having a low on resistance between drain and source terminals so that the drain current is essentially just 9V/9ohm.

These two answers are two orders of magnitude apart, so it cannot be the case that the parameters I used in the simulation/calculation were just off (I simulated with a bunch of MOSFETs on LTSpice). To me it seems like there is something more fundamental that I’m not understanding in my calculations. When is it correct to use that above drain current equation and when should I rather treat the MOSFET as just being a small resistor between drain and source terminals (when turned on)? I’m assuming the drain current equation isn’t used that often because I can’t really find a value for Kn in datasheets. 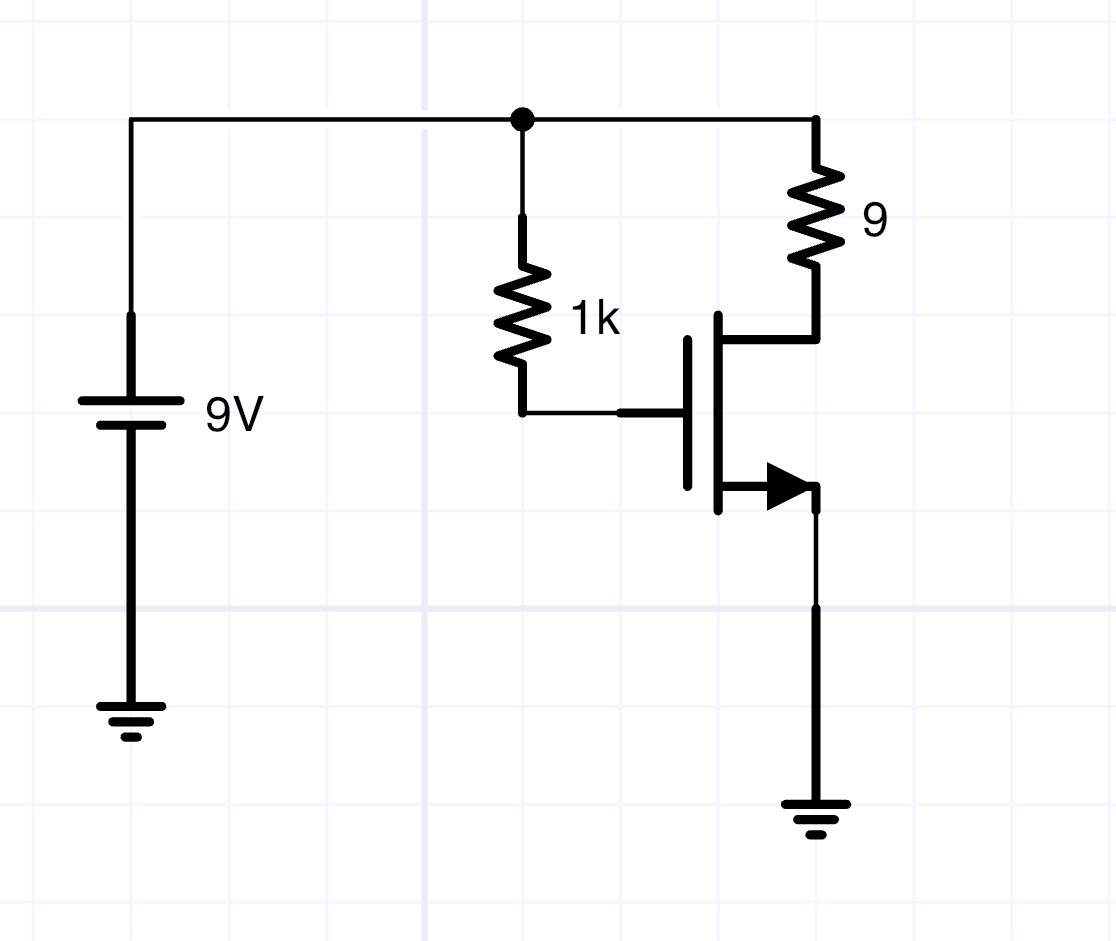 It applies in the linear or triode operating mode, where the current through the channel depends strongly on both \$V_{gs}\$ and \$V_{ds}\$. That does mean that \$R_{ds}(on)\$ is not really a fixed number but depends pretty strongly on \$V_{gs}\$, and the \$V_{gs}\$ where the specification is measured should be stated clearly in the datasheet.

For example, in the Vishay IRF530 datasheet:

Why do you assume you are in saturation?

Here are the saturation conditions:

Not the answer you're looking for? Browse other questions tagged mosfet current resistance saturation transconductance or ask your own question.

3
Input Characteristics of MOSFET in triode region?
0
Depletion Mosfet working as enhancement NMOS
1
MOSFET finite output resistance in saturation mode
0
Change of transconductance for MOSFET
0
Mosfet Voltage Gain in common-source configuration
3
MOSFET drain-source on-state resistance as a function of temperature and drain current
0
What is the purpose of the large resistance from gate to drainin this MOSFET circuit?
1
MOSFET won’t turn-off at low drain current