Let's say I want to use an nMos FET in a low side switching circuit as follows: 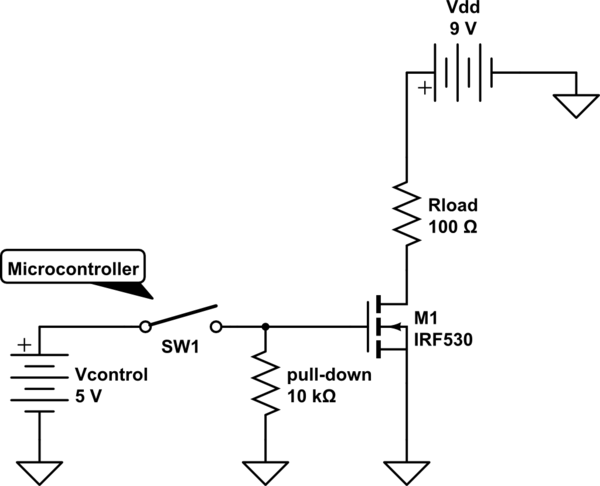 Now, during my education in EE, I have learnt some operation regions for MOSFETs and formulas for drain current related to these regions. And one parameter Kn which was the key parameter shows up in everywhere.

But now, I am having hard time in my calculations, because, there is not a Kn value in the datasheets of such MOSFETs. If it were present, what I would do is:

This was working great while doing it on paper, however, now in reality, I am stuck how to approach this kind of a design using the information present in datasheets.

I'm not able to make any comments on the operation region of the MOSFET because I cannot guess drain voltage without any information about drain current flowing through the circuit.

So, what I am asking is something like the followings:

And as an extra, if anyone knows, an answer to the following would be nice:

Why Kn is not present in these datasheets while it is heavily used in theoretical calculations, at least in my college education?

For ON(mosfet conducts) part of the operation, what should I replace MOSFET with? Rds(on)?

If you look in the data sheet, figure 1 will give you a lot of information: - 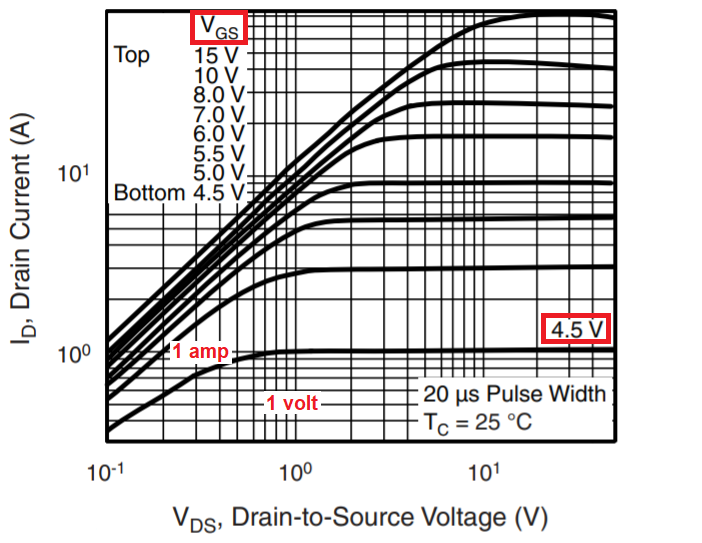 With a \$V_{GS}\$ of 4.5 volts and a drain current of 1 amp, the MOSFET will be dropping about 1 volt. So if the supply voltage is 10 volts and the load were 9 ohms you'd get 9 volts across the load and 1 volt dropped between drain and source.

I never try and replace the MOSFET with a single figure for RDS(on) because it just doesn't give me the full story - I always look at the data in the graph above.

In which operation region a MOSFET should be operated for switching applications?

The graph above depicts that - for an NMOS both voltage and current are positive.

When operating the MOSFET with a "reduced gate drive" you have to be aware of the temperature coefficients that can cause thermal runaway. See this graph below from the IRF530: - 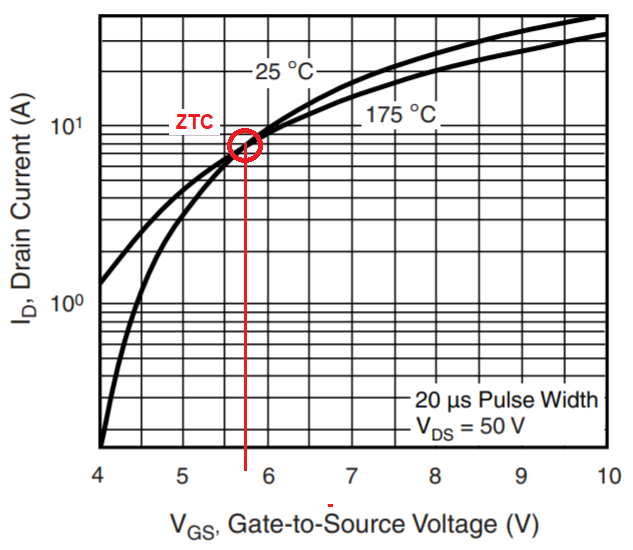 I've marked on the graph the ZTC point - this means the zero temperature coefficient point and basically it means that with a gate source voltage below circa 5.7 volts, there is a possibility that as the device warms up, it's drain current will increase causing more warming and hence more drain current and therefore thermal runaway.

For instance, at a gate drive of 4 volts, the drain current will be typically 0.1 amps and, if the power supply drain-source voltage is (say) 10 volts, the MOSFET power dissipation will be 1 watt and this will warm the MOSFET causing more drain current heading towards 1.2 amps on the graph. Now the MOSFET is dissipating 12 watts and rapidly heading to heaven. It will self-destruct without a heatsink.

So, if a switching application is being targeted use a MOSFET gate drive voltage greater than 5.7 volts plus a safety margin.

Powermosfets like this are not meant to be used in their constant-current region (I call it that because people like to confuse saturation/linear, because they are flipped with BJT. In this case it would be saturation).

When you do, they very often suffer from thermal runaway. As a result, you are pretty much always going to be in the linear region (which you will definitely be doing with the 5V gate-source you show in the schematic). The Rds(on) value is the only one you really care about.

You can actually look at the figures in the Datasheet to see where you would be operating. In Fig.1 you can see that in order to get in saturation with a gate-source voltage of 5 V, you would need a drain-source current of 3 A. With your 9 V battery that would mean you have a maximum 3 Ohm total load.

You can use the same graphs to figure out the Rdson. With a gate-source of 5 V, you can see that we have about 200 mV drain-source voltage for 1A drain-source current, or about 200 mOhm. Of course this gets worse with higher temperature, see Fig.4 for that.

As to what you should model the device with: Depends on what you are doign. If it is a simple DC circuit hand-calculation, the Rds(on) will suffice probably.

Not the answer you're looking for? Browse other questions tagged transistors mosfet switching or ask your own question.