I learn some knowledge of common emitter from this website: https://www.electronics-tutorials.ws/amplifier/amp_2.html 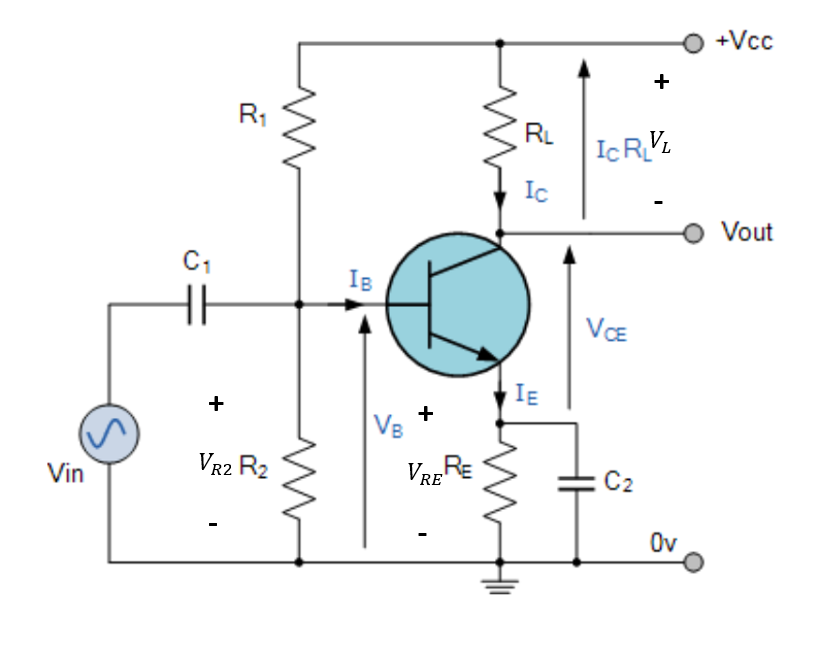 The minus sign in equation Vout/Vin = - R_load/R_emitter may appear counterintuitive. To understand its origin, remember that the network analysis here is performed for a linear circuit whereas the transistor circuitry is inherently non-linear. In order to be able to use Ohm's and Kirchhoff's laws, the circuit designer makes a number of idealizations, starting with an assumption that the voltages/currents in the circuit can be written as sums of DC voltages/currents plus (small additions of) AC voltages/currents. Or, alternatively, s/he examines small variations of voltages/currents near their "quiescent" values.

As for the common collector amplifier of the electronics-tutorials.ws tutorial, notice that for all practical purposes we can assume that C1 capacitance is sufficiently high, so that the AC component of V_base voltage is equal to Vin (Vin is an AC voltage source, I assume). In the Vin source's frequency region in which the C2 capacitance is sufficiently small to neglect current flowing thru a capacitor branch, an AC component of the current I_emitter is practically equal to an AC component of the V_emitter voltage divided by the R_emitter resistance. In the small signal approximation, V_base - V_emitter is constant (usually about 0.7V), therefore ΔV_base = ΔV_emitter, and ΔI_emitter = ΔV_base / R_emitter. Within a 1 percent error (beta = 100) I_collector = I_emitter; the AC components of emitter and collector currents are also equal (ΔI_collector = ΔI_emitter).

Vout is a voltage at the collector output of the transistor, as well as its AC component ΔV_load. Ohm's law gives us a voltage across the load resistor R_load measured relative to a reference point which is +Vcc pin of power supply (this means current flows out of R_load resistor); hence the minus sign in the equation

Edit: In my analysis I assumed IC≈IE and ic≈ie since base current is usually quite small. Also note: my analysis is for ac voltage vout. From your circuit, Vout actually contains both an ac and DC component. DC component is dc voltage at collector terminal.

Before I explain an answer, I need to mention that for the circuit you've shown which is a common emitter amplifier with bypassed emitter resistor RE , the gain is not vout/vin = -RL/RE . That equation is actually an approximation to a common emitter amplifier with no bypassed emitter resistor. I'll explain that also. I'll also mention that collector current IC and emitter current IE are flowing in the same direction, ie: they are in phase. They are also in phase with the base current IB. What causes the negative sign is the output voltage being out of phase with collector current by 180 degrees.

Now onto the answer:

For a common emitter amplifier with bypassed emitter resistor (bypassed with C2):

For the amplifier to work, the NPN transistor must be biased in active region via the network R1, R2, RE, and RL. C1 is coupling capacitor which at mid frequencies can be approximated as a short. C2 is a bypass capacitor which at mid frequencies can also be approximated as a short.To get an understanding of the gain formula we need to look at the ac analysis of this circuit and use an appropriate ac small signal model of the transistor. This is shown below, using the fact that C1 is short, C2 is short, and VCC is ac equivalent to ground. Also using the t model of BJT.

Now, ΔVB and ΔVL are just small variations of VB and VL. That being said, they are essentially ac signals. We can represent ΔVB as vbe and ΔVL as vout or vRL. Now looking at the ac circuit below, it can be seen that small signal input vin equals vbe which is also equal to vre. (Note lower case letters indicate small signal quantities). Here re is the small signal dynamic emitter resistance of NPN. It represents the small signal modeling of the base to emitter diode inside the NPN. This is given by re=25mV/IC.

Now looking at the output: By ohms law and following the passive sign convention we know that vRL=vout= -icRL. Note that current flows out of positive terminal of RL. But since ic= vbe/re=vin/re, then vout= -(vin/re)RL. And gain is then vout/vin=-RL/re. 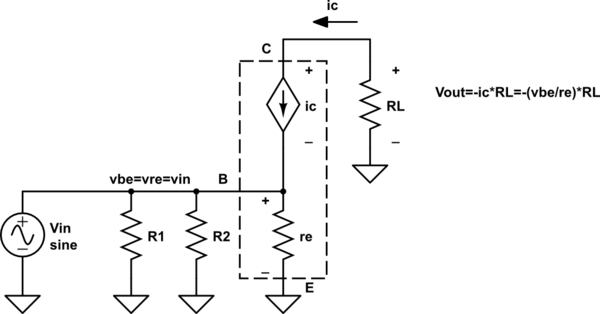 Now I'll explain when you have unbypassed emitter resistance:

Without the bypass capacitor C2 across RE, we must incorporate RE into the ac small signal circuit analysis. The new circuit is shown below. In this case vin equals vbe + vRE which is just equal to vre+RE (voltage over both resistors).

Now looking at the output: By ohms law and following the passive sign convention we know that vRL=vout= -icRL. Note that current flows out of positive terminal of RL. But now this time we have ic= vin/(re + RE), then vout= -((vin/(re + RE))RL. And gain is then vout/vin=-RL/(re + RE).

For when RE >> re then you may approximate the gain formula as vout/vin=-RL/RE. 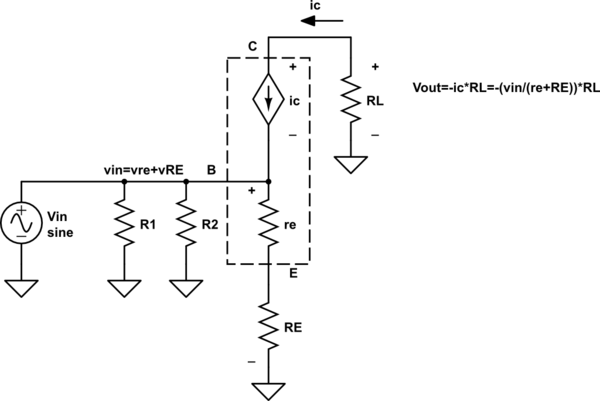 Not the answer you're looking for? Browse other questions tagged amplifier bjt common-emitter or ask your own question.

4
Required Emitter Resistance \$R_E\$ for the Maximum Emitter Current for a BJT
4
Av for small signal analysis with BJT for unbypassed emitter and ro in place
3
Why is the common emitter input insensitive to base width modulation?
5
How to derive the precise gain of an NPN common emitter amplifier without emitter degeneration?
0
Apparent contradiction in AC analysis of BJT amplifier
4
Voltage gain in common emitter BJT amplifier (specific example)
0
Calculating base current without knowing current amplification
0
Why does a Common Base amplifier gives non inverting output?