I have started a project for my home lighting, I'm trying to build a DC LED module which would change the color temperature from 3000K to 1800K as dimmed with reducing current. I'd like to do it mostly passively without any current sense or threshold circuitry. I also want it to run on my current TRIAC dimmable constant current driver.

Firstly, I'd like to share my current "progress" with you, if you can call adding a resistor as such:

I was able to come up with a very simple circuit to do it, I kept the number of warm LEDs in series low, thus the total forward voltage, put a series resistor to them, then parallelly connected the cool array with higher number of LEDs in series. The LTSpice schematic and DC current source sweep analysis results given below: 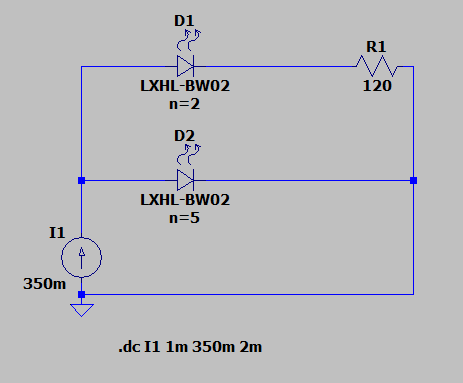 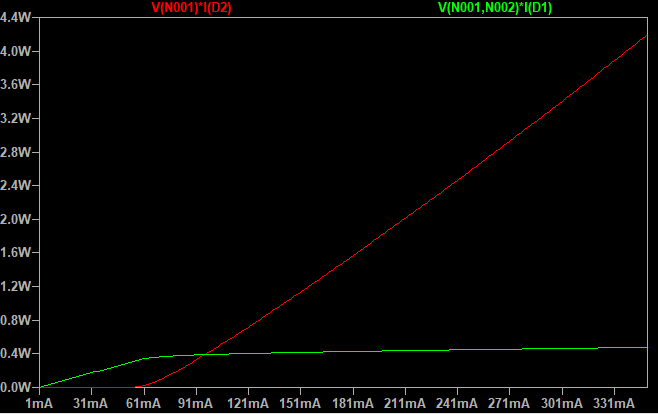 The red curve is for the cool array, green for the warm array.

However as you might have quickly realized, the series resistor dissipiates up to 800mW of power at the maximum brightness, and also the warm LEDs stay on at the end of the cycle(not really a big issue though). For a total of 4.8 Watts power consumed in the circuit, 0.8 W is directly wasted on the resistor.

I've seen some other Warm-to-Dim passive DC LED modules online, some add a transistor, some just use the resistor approach. Here is an example of such arrangement with transistors, but i wasn't able to figure out the circuitry from the pictures: 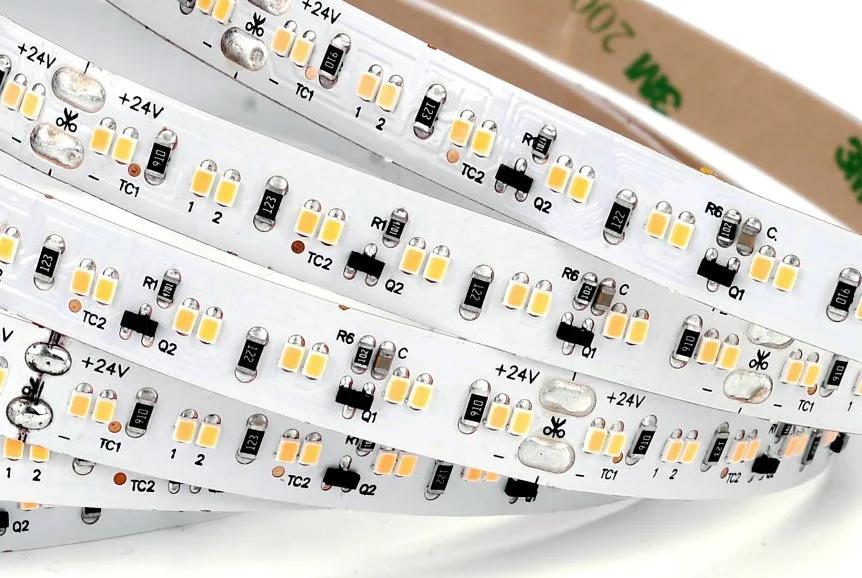 I can just speculate that the transistor assisted circuitry is much more efficient since the transistor or MOSFET just switch current instead of dissipiating the unwanted amount.

I failed on designing some transistor or MOSFET circuits, I tried to sense the current on the warm LED branch, then feed it to the transistor so the cool branch could turn on after some set current.

Maybe me being an amateur hobby electronics guy, originally a mechanical engineer, couldn't see the obvious thing they've done there, or couldn't come up with a very simple transistor arrangement to achieve it.

Can you recommend me a circuit that:

Thanks in advance for any help provided!

2) Then define or simulate the power or lux level and colour spectrum of a sunset using a mix of orange and/or red and dim white and maybe a blue horizon.

3) Then consider a neutral white (4500~5000'K) for your base with the constant sunset lights to warm up the blended light.

This was the least technical answer I could make for a non-EE. 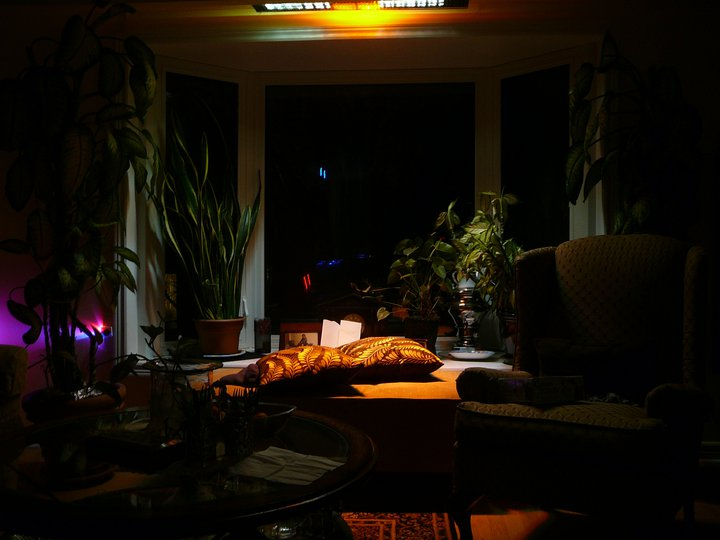 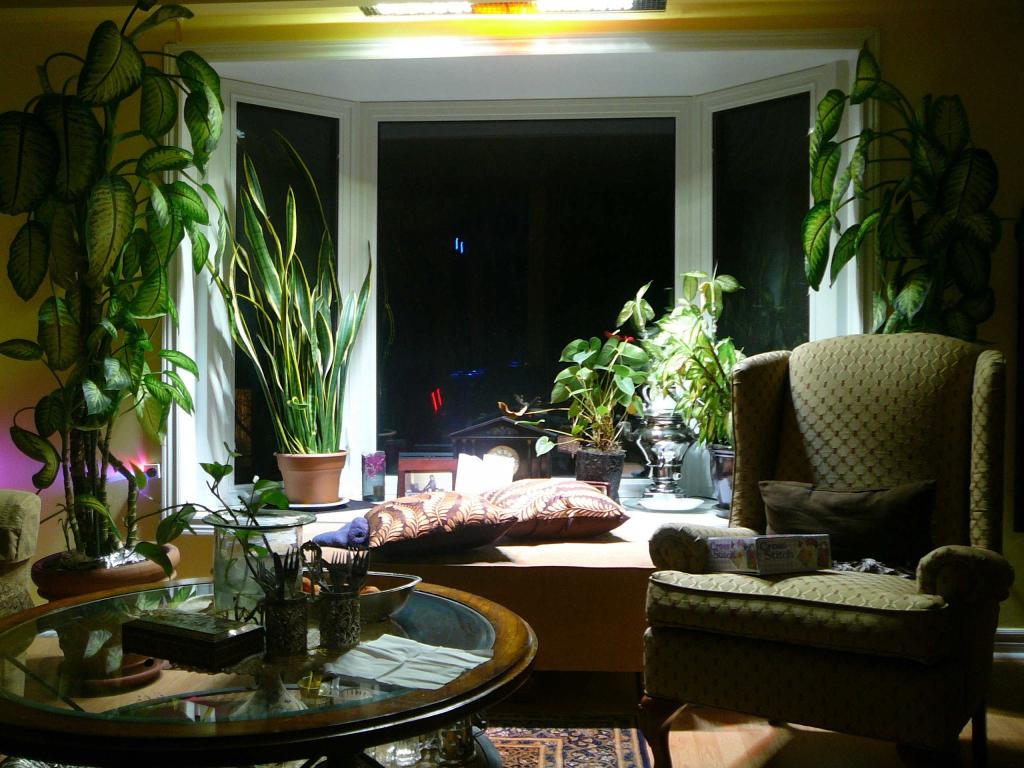 I modified a Universal Laptop charger with a 4 wire connector and a few parts with a pot to adjust the voltage 3 to 35V with LED indicator in a small box lower left instead of a fixed 19.5V 65W.

But I am suggesting "dimmable" PAR (parabolic reflector) Edison-base AC bulbs to match your desire using a Triac control. Dimmable LED bulbs are pretty common not but none of them match, so I get bulk qty in a box in case of failures.

For the Orange, Red emitters Blue, you might be better off using RGB remote strings avail on Banggood , Ebay etc.

Here is how I did it in the end,

I had to give up on using only passive circuitry, also had to use a current sense resistor. Put a LM317 regulator in series with the warm array, in current regulating configuration. I modeled the actual LEDs I wanted to use according to the I-V curves given in their datasheet, used an LED modeling guide for SPICE from this answer. I've chosen the current sense resistor as 15 ohms.

Here is the final schematic i used: 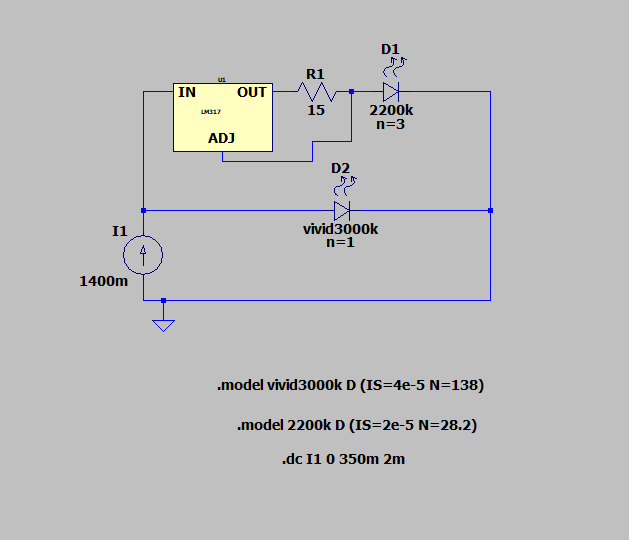 Here is the power delivered to warm array(green line) and cooler array(red line) with respect to the total current, the current sense resistor power dissipation isn't included in the graph but it maxes out at 110 mW: 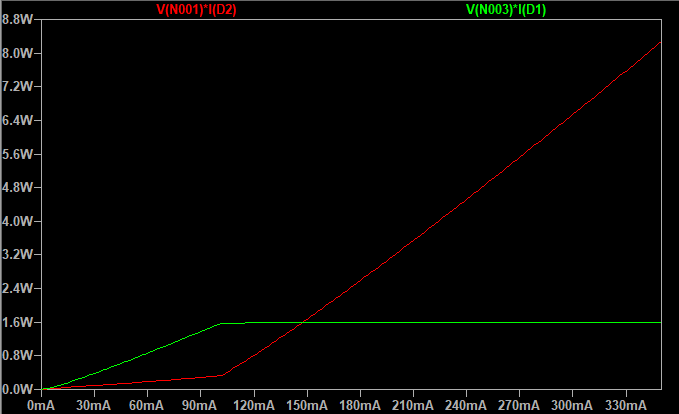 And this is how I implemented it physically. Excuse my unaesthetic solder work because I had to put everything on the same board, I did some scraping to create new pads: 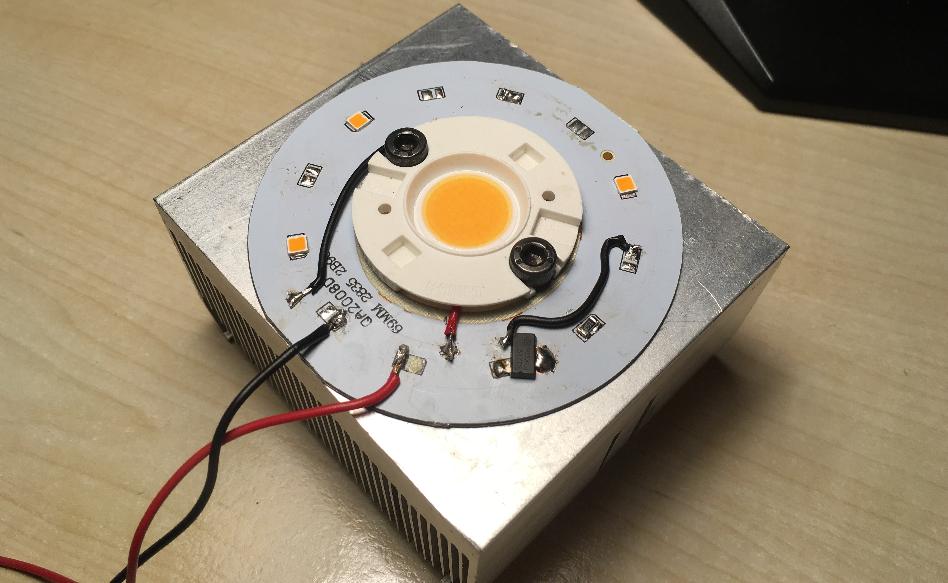 It works just fine, the temperatures of the components are fine, nothing is too hot to touch for less than 10 seconds. The LM317 is well heatsinked by the aluminum PCB, and its maximum power dissipation in this circuit is 1W.

Not the answer you're looking for? Browse other questions tagged transistors led temperature dimming passive or ask your own question.

4
Building a simple mcu-driven array of LEDs
2
Powering 11 x 10 watt LED array
0
What Wattage does my resistor need to have to be save to dim an LED strobe module?
4
Is there any pitfall to using resistors in series AND parallel for an LED array?
1
High power LED array
0
High Power UV led array for SLA printer
4
Dim 20ma LED in retrofit application
1
Need help understanding PNP Base into NPN Collecter circuit for LED Array
2
Dim LED lamp with constant current power supply using resistors
13
Do I still need a resistor in this LED series design?