How do I make this electronics system of circuits and batteries work?

WARNING:
It is VERY unwise and also dangerous to directly connect two batteries together in order to try to charge battery 1 from battery 2. If battery 1 is relatively discharged and battery 2 is relatively charged VERY high currents can flow between the two batteries.
Depending on the LiIon batteries used this could cause fire and/or damage to the batteries.

You could add a resistor in the circuit between batteries - but this will waste energy and needs to be sized for the worst case relative charge situation.
An acceptable solution is to add the circuitry from a battery bank that will accept 3 to 4.2 V in and provide battery charging out. Because of the way battery banks usually work not all will operate with 3V to 4.2V in.

What will work - and it adds complexity and inefficiency is to use TWO battery bank circuits. Battery 2 inputs to the battery terminals on PB2 and outputs 5VDC. PB2 5VDC out connects to 5vDC IN on PB1 and charges battery one connected to PB1 battery terminals.

My question is, how do I make it so that when Battery #2 is disconnected from Battery #1, Battery #2 and Circuit #2 are connected. ....

You can almost do this with manual switching, and do it exactly with a relay or simple circuitry.

In both cases a 4 pin connector is used between B1, L1 & B2, L2.
2 wires connect the batteries via a charging arrangement - see above.
2 wires are used to connect load 1 to load 2.

If you don't mind having to manually switch B2-L2 when the modules are disconnected then this is an easy and low cost solution.

Provide a switch S1 between B1 - L1 and another between B2-L2.
When the connection is made charging occurs from B2 to B1 and L1 is connected to L2.
If S2 is operated both L1 & L2 are powered by B2 (If S1 is operated then both loads are powered by B1 but that is not on your requirement list).
When the connector is disconnected then B1-L1 is controlled by S1 and B2-L2 is controlled by S2.

A simple electronic circuit (one or two transistors and a few resistors on each module) could replace the relays.

I could draw the related circuit, but I suggest that you look at the above descriptions and draw a circuit that matches. Ask if too hard after giving it a try.

A circuit with a 2 pin connector may be possible but with extra circuit complexity.

Below is an example only circuit that meets what I understand your requirement to be. S2 operates both loads when the two modules are joined and load2 only when separated. Load 1 is automatically powered on separation.

Three wires is possible with a little more complexity.
Two wires would need "signalling" over the charging circuit and is possible but non-trivial. Use of eg optocoupled signalling as well as the two power leads would allow two wires plus the opto link. 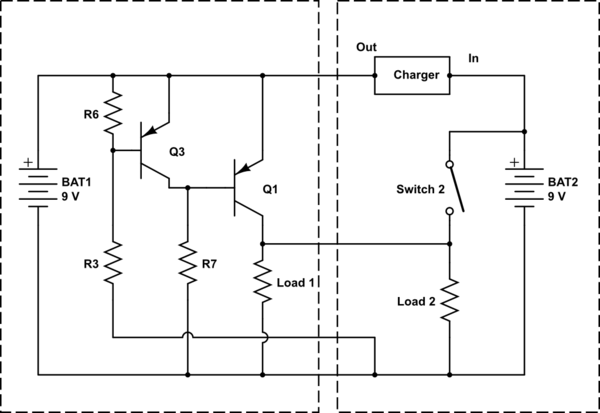 In the above diagram charge direction is left to right.
Assume source battery is of higher mAh than target battery.

This addresses the various discussions. I have not gone over it in utter detail compared to spec as the spec is somewhat fluid - and a boost converter is still needed for battery-battery charging BUT it shows how one side can auto turn on when disconnected and how both sides are controlled by one switch when connected.

Not the answer you're looking for? Browse other questions tagged circuit-design schematics system or ask your own question.

1
How to make a proper DC Power + Battery circuit for audio effect pedals?
0
How does this wireless charger work?
1
3+ 3v and 1x 4.5v circuits with one or two batteries?
0
Can 2 circuits exist and work independantly in an electric guitar
2
I designed and made this circuit but it produces only 360V when it should be producing at least +1000V
0
How to wire LEDs and CR2032 battery to make it work
1
Why doesn't the Attiny85 work in this circuit?
1
How to make this T-flip-flop circuit
2
Does this circuit work to switch a load with a microcontroller?
0
What is the role of D2 and D3 in this circuit?