What is the current in a FET as gate voltage is increased towards large voltages?

I know that beyond a threshold voltage VGS, increasing the gate-source voltage VGS in a field-effect transistor (FET) increases the drain-source current IDS quadratically. I've looked on the web and in textbooks, and I don't see any explanation for what limits the quadratic growth.

Assuming that I have plenty of source-drain voltage VDS, what is the limiting behavior for very large gate-source voltages VGS in a FET?

Does anyone have any good references for this? Is the behavior drastically different between MOSFETs, JFETs, MESFETs, HEMTs, and other transistors? 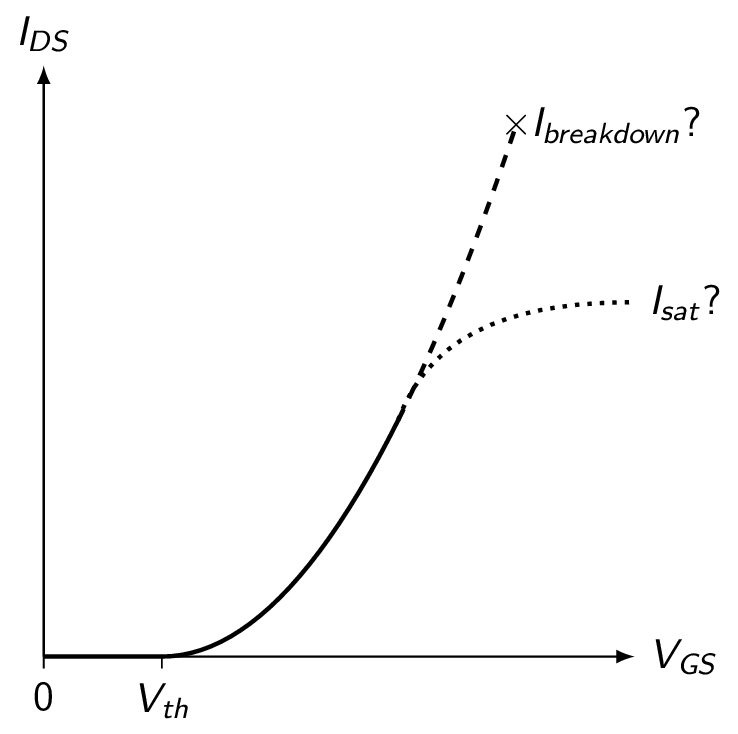 I think what you're looking for is an understanding of what drives the saturation current of a FET channel. There are various models for this (e.g. short vs long gates, high vs low Vth).

To first order it's electron concentration in the channel and electron drift velocity.

To second order ohmic contact resistance and other parasitics factor in.

There is some more detailed insight in this (darn interesting, I wish there were an accompanying video!) course presentation: www.ee.sc.edu/personal/faculty/simin/ELCT563/19%20JFETs%20MESFETs%20HFETs.pdf

Not the answer you're looking for? Browse other questions tagged mosfet gate-driving jfet fet or ask your own question.

8
About JFET polarity
1
What is the dependency of the gate leakage current and the gate voltage?
2
In MOSFETs why is the gate-body inversion layer voltage able to create a conducting channel, yet the same source-drain voltage not?
4
MOSFET Oscillations when bringing gate to same potential as drain
1
Why can a MOSFET be used as an amplifier?
1
Describing the process of pinching off of a n channel in JFET
2
What is the difference between "Operating Voltage" and "Drain-Source Voltage" for an LDMOS FET?
1
Chanel Resistance in a saturated MOSFET
0
What exactly does a FET do?
0
Under what conditions does a p-FET gate have to be at a higher voltage (or more negative) than its source?