What is reactive energy?

which is non-sense; they're defining reactive energy as reactive power, which is a different quantity; energy has units of joules, yet the right-hand side of the previous relation has units of joules per second (or watts or VArs; they're dimensionally the same). Why do they define it as such? I read these three questions (1, 2, 3), but they don't really address the ones I've asked.

In the AC power industry, reactive energy is electrical energy that is stored rather than converted to some other form of energy and thus "used" or "consumed." Reactive power is the rate of transfer of reactive energy from one storage component to another.

The diagram below shows the typical transfer of power from the electrical grid to a point of use. The source voltage is supplied to the user and is assumed to be an ideal single-phase AC voltage source. The load can be represented as a resistor in parallel with an inductor. The source voltage is the voltage across both components of the load.

Shown as an ideal circuit, the average and the net reactive energy transfer is zero. However there is real energy that is constantly going back and forth. In an ideal system, the reactive energy is generated when the load is connected, transfers back and forth as long as the load is connected and is given back to the source when the load is turned off. In actuality, something like 7% of the energy is lost in every transfer between the load and the generator. The utility will put some capacitor storage in local substations or even on transmission poles. Using their rate structure, the utilities encourage large users to furnish their own capacitors. 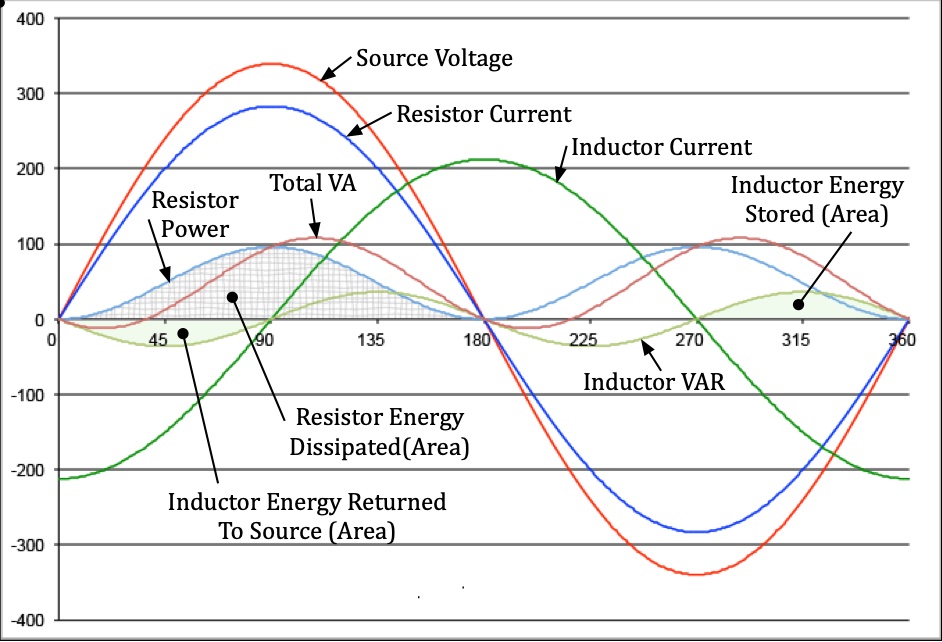 Circuit Data For Above

there's no net energy transferred due to the reactive component of a load impedance.

There is no net energy, but that is only because energy is transferred in both directions.

... reactive energy and their corresponding meters ... what energy do those meters actually read?

They read the rate of energy transfer back and forth.

If it's "reactive energy", what do they mean by that?

The unit of measurement that us used for utility energy billing is the kilowatt-hour. That is the area under the power curve integrated over the billing cycle. For fossil fuel generation, energy measured by a kilowatt-hour meter is equal to the energy content of the input fuel plus the losses incurred in generating, transmitting and distributing the energy. Most of those losses are directly proportional to the energy generated.

Utilities may also measure the kilovar-hours. That is the area under the var curve integrated over the billing cycle without regard to the direction of energy flow. Although the net reactive energy transferred is zero, the losses incurred in transmitting and distribution vars is directly proportional to the total vars transferred. There is also an associated capital cost of generation, transmission, and distribution equipment that is proportional to the the total vars transferred.

Billing formulae and metered quantities used are determined by individual utility companies. The basics are generally similar, but a variety of specific methods are used.

The basic information presented is presented similarly in text books that cover AC circuits. Here are some references that are specific to the electric power industry:

The Work is exclusively produced by the active power. For instance, a diesel engine produces only Active power (its power is only expressed in kW or hp never in kVA, you cannot think of voltage and current when dealing with mechanical energy). This power can drive an alternator which generates an electrical power. Now, depending on the load profile we can have a phase shift between voltage and current so, for different loads, we can have the same Active Power with different currents and hence different reactive powers.

Reactive energy is additionally billed in some cases. Why do we have to pay unused energy? It is not a matter of inventing new payment. In fact, consider an energy provider generating electrical power and consuming fuel depending on the mechanical power (active power).Although he is paying the active power (fuel consumption needed for the mechanical power) but he must distribute this power through transformers and transmission lines (we are not interested now in the conversion efficiency and losses). To simplify let us only consider transmission lines. His active power is the sum of active power consumed by clients and the active power that heats the transmission lines depending on the current. So As I mentioned, since for the same active power we can have different currents, the energy provider consumption increases with current even if the real work of his clients is still the same. The reactive energy is then a justified billing argument. It is usually imposed to incite the customer to use a power factor corrector and hence reducing the reactive energy.

I guess many of us would be capable enough to invent new payments. Some of the introduced payments can be created to control the behaviour of people.It's surely useful for power companies to persuade people to have power factors as near 1 as possible.

Reactive energy got by integrating the absolute value of the reactive power can be a good behaviour controlling money collecting criteria which can be justified. It's a single number that has a price and people can make their number smaller by using properly designed devices. It can be presented as a hard fact when people have only one electricity supplying network available. It can also be explained as a compensation of losses - that much energy your actions have forced us to transfer to your devices and back through the wires and every transferred pulse has dissipated a part. Pay it!

Not the answer you're looking for? Browse other questions tagged power capacitor ac inductor energy or ask your own question.

1
Complex power using phasors derivation
19
Does this device which claims to reduce reactive energy from a house work?
5
Do real and reactive energy exist?
2
LC circuit with series diode (finding the linear average)
1
Active Energy, Reactive Energy or just Energy?
0
How does one relate an RC circuit's time domain solution to phasors?
6
Why is the efficiency of a half wave rectifier equal to 40.6% and not 50%?
5
Is reactive power periodic in nature? What is the exact difference between active power, average power, and real power?
0
Why real power is average power and not average power times frequency?
2
Calculation for energy consumed over a period of 24 hours