What kind of circuit do I need with a 6N138 optocoupler to get proportional output?

I have 0-5V input that I need to isolate and still output ~ 0-5V to an isolated circuit. I purchased some 6N138 optocouplers to do this but I'm not getting a voltage output with a 5V input. There are some transistors built into the optocoupler that are complicating things. How do I create a circuit with the transistors to get an output of approximately the same magnitude to the input?

It's not easy to do with a simple optocoupler, because the CTR is not well-controlled.

The usual solution is use a "precision optocoupler" like TIL300 or HCNR200. These have one transmitting LED and two matched receiving photodiodes. You use one photodiode to deliver the signal to the isolated side, and the other one to provide feedback to an op-amp circuit on the sourcing side to enable the signal amplitude to be controlled accurately.

This may look like a lot of circuit complexity, but it's likely to be simpler in the long run than calibrating a single-receiver optocoupler, compensating for temperature variation, etc.

If you don't want to shell out the $$ to buy a commerical isolation amplifier, you can digitize the signal and send it over the isolation barrier digitally. For example, you could use a small MCU with built-in ADC + UART and use serial communications.

Rather low-speed serial communications because that opto is a bit of a slug, or pick a faster one.

Then convert it back to analog using PWM or a DAC on a second MCU (could be another of the same type).

Analog opto-isolation is possible, and we used to do it years ago, but the variation with temperature and LED aging make it difficult to guarantee good performance such as stability and linearity. Analog isolation amplifiers can also use PWM directly (which places some constraints on the opto performance), frequency, or using analog signals chopped and sent over an isolation transformer (typical of some Analog Design process control oriented hybrid products).

Use two parts, one in a feedback loop to linearize the other. https://www.electroschematics.com/linear-dc-signal-opto-isolator/

This is the circuit to obtain the output signal with unity gain. The solution is based on AMC1211 from Texas instruments, which is an isolated unity gain amplifier.

The output signal from this IC will be in the range of 0 - 2V.

Thus, for an input signal in the range of 0 - 5V, an isolated output signal of the same magnitude is obtained. 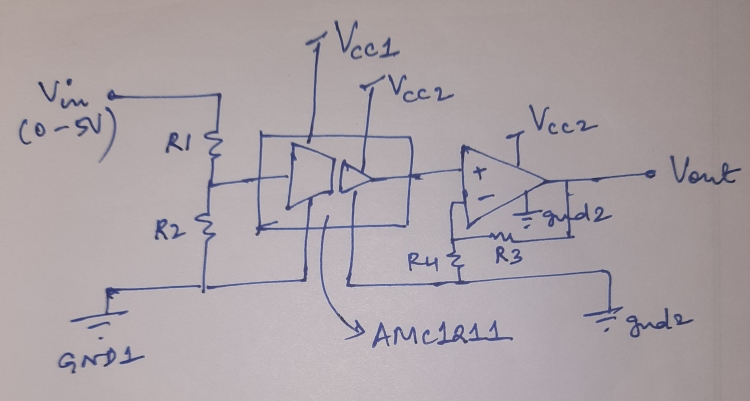