I foolishly took on a complicated school project of making a model particle accelerator. The idea was to make it a modular system, as in each segment, or "accelerator module" would be independent so the final arrangement could be altered at any time.

The "particles" would be steel marbles and each segment would be made up of a photo-interrupter and a coil. The sensors would be placed before each coil, that way they would only be on for a short time while the marble was breaking the beam, providing the kinetic energy to get to the next stage, but not leaving the coil on so long the marble would start accelerating in the other direction

I have designed a rough circuit which by my logic should work, but for the life of me I cannot figure out how to calculate the resistors for the transistors or MOSFET. My goal was to keep it simple, not require a microcontroller, and for the segments to be independent of each other.

This is what I came up with;

The inductor represents the coil, it has a resistance of 0.6ohms and an inductance of 1200uH. Each coil will theoretically pull 40A at 24V. 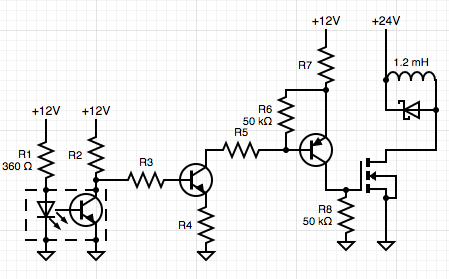 Components (all sourced from Arrow.com):

-The LED and transistor on the far left represent the photo-interrupter, it is an EE-SX1070

-The NPN transistor is a BC337

-The PNP transistor is a BC327

-R4 Is only there as most examples online had an emitter resistor, it may not be required

-R5 Is to limit the current through the base of the PNP, and into the collector of the NPN

-R6 Is to stop the PNP's base from floating, it may need to be lower to ensure that the NPN has enough collector current

-R7 Is to limit the current into the PNP's emitter, however it might be slowing down the switching speed of the MOSFET

-R8 Is to discharge the MOSFET gate capacitance, thus decreasing turn off time

If I have overlooked anything, done anything wrong, the circuit is flawed or more details are required please let me know as this is my first post. Any and all advice is welcomed.

Let's start by figuring out what resistors are needed, before settling on rough values (exact values aren't needed).

This would be the case if driven from a low resistance output stage. However, the source current of the stage driving it is already limited by R2. You could omit R3. If you want to remove the phototransistor and sometimes drive it directly for debugging, then by all means have a nominal value there, 1k, 50k, whatever.

-R4 Is only there as most examples online had an emitter resistor, it may not be required

R4 is not required, as we're doing logic here. It's often used for linear amplification.

-R5 Is to limit the current through the base of the PNP, and into the collector of the NPN

Required. We'll get a value later.

-R6 Is to stop the PNP's base from floating, it may need to be lower to ensure that the NPN has enough collector current

Not wanted. You'd see this in a linear amplifier, but we're doing logic.

-R7 Is to limit the current into the PNP emitter, however it might be slowing down the switching speed of the Mosfet

Not wanted. Used in linear amplifiers.

-R8 Is to discharge the Mosfet gate capacitance, thus decreasing turn off time

It doesn't 'decrease turnoff time', it's the only thing that's doing any turnoff, as the driver transistor only sources, not sinks current, and the FET gate doesn't sink current either. As it's a fairly slow application, you'll get away with a resistive pulldown here, but any serious frequently switching application would need an active transistor to remove charge from the gate.

Use as small a resistor as you can, subject to the drive transistor being OK for the current. BC327 has rated minimum Hfe up to 300mA, so you've plenty in hand. A 300 Ω resistor would dissipate about half a watt from 12 V. Although you intend only short pulses of output, make sure that this resistor is rated for continuous dissipation, it's one fewer things to fail if your pulse stays 'on' accidentally for a long time.

Now we can go backwards and get some values.

R5 needs to turn the transistor on into 300 Ω. Let's use a very conservative Hfe for the second transistor of 30, so R5 becomes 10 kΩ.

Some folks put base-emitter resistors on their switching transistors to divert any leakage base current to get a good 'off'. These are only really warranted at high temperature or humid environments, you're unlikely to need them.

Sometimes you see a small resistor in series with the gate of a FET, often 10-100 Ω range. This is only needed in serious applications, where the FET is being driven by a low impedance driver, and it's to limit the gate charging current to limit ringing and overshoot. Will not be a problem in your application.

Is the driver adequate? This section is for the OP, when he's got a lot more under his belt, and people who might want to downvote what may appear an excessively hand-wavy answer, so they don't need to look up the FET and do sums. The FET has a 100uS SOA going right out to 40 V and 300 A, so as long as all switching is done within that time, there's no need to worry. The FET needs about 100nC gate charge to get through the Miller plateau, and then some. Assuming Hfe=100, Rs=10k will source 1 mA to base, so 100 mA at the collector. 100 nC at 100mA = 1 us, so switch on is OK by two orders of magnitude. It's a logic level FET, so Vgs(Miller_plateau) is low at 3 V. Even so, 300 Ω R8 will abstract charge at 10 mA, or in 10 us, still an order of magnitude for safety. The FET only has an unclamped inductive energy rating of 320 mJ, whereas the inductor can store 1 Joule at full current. That clamping zener is essential therefore. Note the FET only goes to 40 V, so the zener must come in before that. Maybe a higher voltage FET would be a good investment.

Your concept has potential flaws and may need improvements; these come first before any discussion of component values.

The sensors would be placed before each coil, that way they would only be on for a short time while the marble was breaking the beam

R8 (50 kohm) will cause the MOSFET to deactivate in about 0.5 ms (due to discharging the 11 nF gate capacitance) but, have you calculated the time it takes for the steel ball to arrive at the mid-point of the solenoid? That's when you could deactivate the solenoid in order to get maximum speed. Of course, if you want a slower ball speed, then turn off the solenoid earlier but, at the moment, your solenoid drive will begin to deactivate before the steel ball enters the solenoid. This may be too light-handed.

So, I think you may need some form of "hold-control" and you can make it variable. Maybe the 50 k resistor (R8) could become a 500 k potentiometer?

On the other hand, when the MOSFET deactivates there is still current circulating in the coils and that then finds a path via the parallel diode. The problem here is that the diode virtually shorts the solenoid out and it takes a long time (in relative terms) for the magnetism to reduce to marginal levels. The coil inductance is 1.2 mH and the resistance is 0.6 ohms therefore the time constant is 2 ms and I can't tell you if this is too much. If you feel that the 0.5 ms from the gate capacitance plus 2 ms from the coil discharge will adequately position the steel ball inside the solenoid to gain the momentum it needs, then OK.

There is also the charge time of the solenoid; with 24 volts and 1.2 mH the current rises at 20 amps per millisecond so if you aim to get 40 amps flowing then this "feels" about right. It should happen in less than 10 ms. However, if the ball passes through the optical gate faster than a couple of milliseconds then you can't rely on achieving anything like the peak current so, maybe you need a "sustain-control"?

The suggestion I'm making, in order to avoid you going down a path that might be hard to reverse out from is add a sustain or a hold circuit. I'm not bothered about choosing the resistor values because it's important that the concept is right first.

Take a look at totem pole drivers if you want discrete BJT driver, or look at gate driver ICs.

The risk is that by switching the FET off slowly you pass a lot of current through the FET while it has high Rds during the off transition.

You have the same problem in the on transition if R7 is too big.

Gate driver ICs tend to have amps of gate current to make the FET switch fast.

Anyway, if the duty cycle is low enough it will work.

R4 should be zero.

R7 should be zero assuming your FET can tolerate Vgs of 12V. If it cannot, consider a lower supply rail.

R6 and R5 should be set such that voltage at their junction is approx 1V below the rail. So R5 is 11xR6.

R5 should also be set to saturate the base of the PNP when the NPN is on. Assume the current gain is 10 for such high collector current. So R5 will be 10x R8. Solve for R5 and R6 once you have set R8.

R3 should be zero.

The above only works because you are running digital, on/off. For a linear application you would need to be much more methodical about the transistor currents, gains and biasing.

Not the answer you're looking for? Browse other questions tagged mosfet resistors electromagnetism npn pnp or ask your own question.

2
PNP or NPN Transistor for this schematic?
0
Transistor inversions
0
Help to calculate the collector current
2
PNP to NPN Transistor switch
0
What is the function of this npn transistor?
1
Need help understanding PNP Base into NPN Collecter circuit for LED Array
0
Current through a transistor
1
Requirements for NPN, PNP transistors
0
Negative differential resistance on current sink
1
Where did the base get the current from?