Why does a phase-ground fault in an impedance grounded 3-phase system lead to variation of voltage in healthy phases but this variation doesn’t happen in solidly grounded systems?

I was thinking about using the idea of a neutral shift to explain it but turns out their both connected to ground so I see the neutral won’t float in either case so I can’t use that to explain it. Unless I’m missing something?

Although your question is correct, I find it easier to look at it the other way around:

L2 and L3 are not affected directly.

In an isolated or impedance grounded system, N is not grounded, but equal to If*Z_ground (fault current times the ground impedance), relative to ground potention (0V). This time N=0 is not fixed, so instead of L1 = N = 0, you change it to N = L1 = 58 kV relative to distant ground potential. L2 and L3 are unchanged relative to distant ground, but the neutral voltage is now equal to L1. So, when you measure L2-N you will get 100 kV, instead of 58 kV.

This allows you to keep the system running normally, since the line-line voltages are unchanged. This is used in coil-compensated systems (Peterson-coils), where a faulted distribution system can operate for hours, while personell are fixing the fault. This is normal for 11 - 132 kV grids in Norway, but not many other countries that I know of.

I think using this idealized example will help you visualize the neutral shift. Below is a three-phase ideal voltage source (e.g. 13kV system) in series with source impedances. There is a fault on A-phase as shown and no load on B&C to keep it simple. 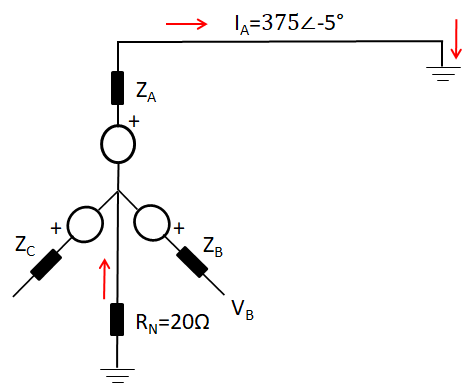 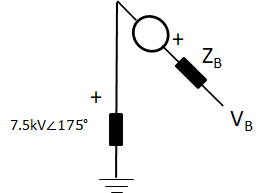 Not the answer you're looking for? Browse other questions tagged power-supply grounding three-phase power-engineering or ask your own question.

2
Three phase ground fault
0
What is the cause of voltage phase shift in a power system?
15
Why an electrician wiring error could make a PC's USB shield be at 120V when it should be grounded
0
Single-Phase-to-Ground Fault doubts
0
480v delta/400v wye with Neutral ungrounded
1
Can lightning damage electronics via a ground connection?
5
Measuring soil resistivity and estimating soil equivalent resistance in a long distance
3
Why is there not lots of current flowing on a house’s grounding electrode?
0
Is the SWER (single-wire earth-return) system dangerous? If not, why not?