Fuses & current ratings - are there fuses that blow "fast" close to their nominal rating?

The context or reason for this question is the following:

A test was made with a load (heater) of 1000W (about 4 Amps). The circuit worked fine for several hours. Then the heater was switched to 2000W (about 8 Amps). The fuse did not blow, but the TRIAC did. The reason for that is that at 8A, the TRIAC has to dissipate too much heat and there is no specific cooling. Possible 6A is also too much, but that is not the question.

Thermal fuses are rated for speed with T, M or F, and are rated for a given current. This is in fact misleading. The fuse does not break above the given current - il requires a lot of time for a glass fuse rated at 4 Amp to blow at 4.5 Amp. In fact the rating T, M and F are "specified" for currents that are 10 (ten) times the nominal current.

According to my analysis of the F6.3A glass fuse, at 8A the fuse will blow after about 200s. Which leaves enough time for anything else to overheat and blow itself.

So this made we realise that glass fuses, ceramic fuses and other fuses exists possibly because they have "better" ratings with regards to overcurrent protection.
Are there fuses that would allow a 4Amp current to flow indefinitely, but blow pretty fast (say about one second) for a current slightly exceeding 4 Amps, for example 4.5 Amps.

A comparison between fuse technologies that are commonly available for PCBs would be nice but the principal information I am looking for is the existance (or not) of fuses that do what most people would expect them to do: blow in a short time as soon as the current exceeds the current rating.

I am looking for is the existance (or not) of fuses that do what most people would expect them to do: blow in a short time as soon as the current exceeds the current rating.

Fuses don't protect a kettle from damage should it suddenly develop the urge to take more current. They protect infrastructure i.e. the wiring of your home and, the wiring of your home can take excessive currents for a pretty long time before getting too hot and starting a fire. The fuse stops the house burning down and isn't capable of protecting your kettle, hi-fi or TV should it develop a fault that causes it to take more current.

If your kettle, hi-fi or TV takes more current (than it should do) then it's because it's about to fail.

I think the big problem here is the narrow margin that you're asking for. If you want to reliably allow X amps, and rapidly reject Y amps, you need Y to be as large as possible compared with X. Fast action with a narrow margin is harder to engineer than slow action with a wide margin, and requires more precision. That all means it's going to cost more.

In searching, I found some "ultra-fast" fuses (from Littelfuse) marketed specifically for protecting semiconductor devices in power equipment. (Listed as "FF", "Very Fast-Acting".) These "specialty fuses" are a whopping $15 each (for a single-use consumable! I found a whitepaper noting that it might be cheaper to replace the protected component than the fuse.) Nevertheless, the 4A fuse is only rated to open after 1 second at 5 amps, marginally worse than what you asked for.

So I think (although I am not a fuse expert!) my bottom-line answer to your question is no, there is probably not a fuse that meets your needs (at a realistic price point.) You have set yourself an excessively difficult problem, I think. Instead, rethink your approach to work within the limitations of the components that are available.

One option, which I expect is the best one in practice: widen your margin. I see you already discussed this in a comment, a bit, so forgive me for repeating: that means lowering your current draw, or oversizing your triac, or adding a heatsink, or doing something to give you more headroom between the desired current and the upper limit.

Another option, which is tantalizing but I regret that I don't know enough to know how feasible it is, would a solid-state approach. Something to look into could be a "crowbar circuit", https://en.wikipedia.org/wiki/Crowbar_(circuit). This is a circuit which shorts across the power rails when a fault is detected, removing the current through the load and causing the fuse to blow immediately (thus the crowbar circuit itself does not have time to overheat.) They are normally used for overvoltage protection, and perhaps someone more experienced can set me straight, but it seems like an approach that could be workable here (suitably adapted). HOWEVER, it sounds like your circuit may be running directly from the mains voltage. In that case, I'm not sure whether such an approach is practical or advisable (or permitted, by whatever regulatory or certification authorities you may be subject to.)

A Thermal Overcurrent Circuit Breaker is faster than the classic glass fuse for overcurrents and breaks in less than 10 seconds for double the nominal current compared to more than 30 minutes with the glass fuse. Their disadvantage is their cost. My understanding of the datasheet suggest that the circuit breaker might not break below about 1.8 times the nominal current. 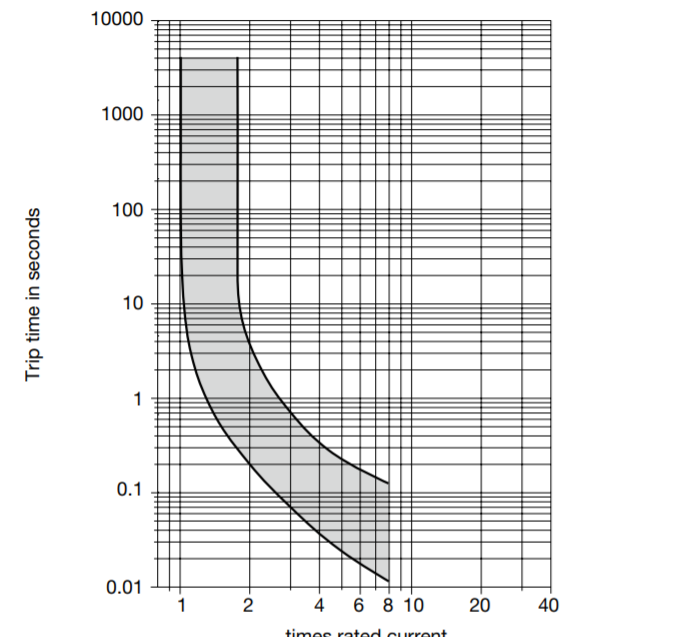 Not the answer you're looking for? Browse other questions tagged protection fuses triac circuit-protection or ask your own question.

21
How does a fuse blow at its current rating, regardless of voltage?
4
How can a Live-Neutral transformer fault cause 2000 Ampere to flow?
1
Voltage rating of series connected fuses
0
Are there ways to determine whether or not a fuse will blow if placed into a circuit?
8
Why are fast blow fuses more tolerant to small over currents than slow blow fuses?
6
Small step down transformer fuse, primary or secondary?
1
Fuses - Are there any voltage conversion for the break-off
7
Fuse 125V/4A can be replaced with 250V/4A?
1
Are these fuses out of spec?