I've developed a circuit and custom PCB for use in a guitar pedal effects chain. This takes the input signal and switches it between 3 distinct external loops, (A, B, C) such that you can arbitrarily switch between loops to three different pedals, and switching to any one will bypass the other two loop circuits. Only one loop can be active at a time.

I've set this up with solid-state relays so that say, a momentary switch press on A will

I had some test boards printed and put everything together, and while the circuit switching fundamentally works as expected, there are some issues I discovered that make it not really usable in the current state:

It's worth noting that each effect return has a 100k volume pot to trim levels between the three effects, however the low volume problem doesn't change at all even when all loops (and thus the volume pots) are bypassed.

Any clues as to what might be causing these issues? I've searched around and there are several possibilities it seems so I'm not totally sure which if any of them are the problem. 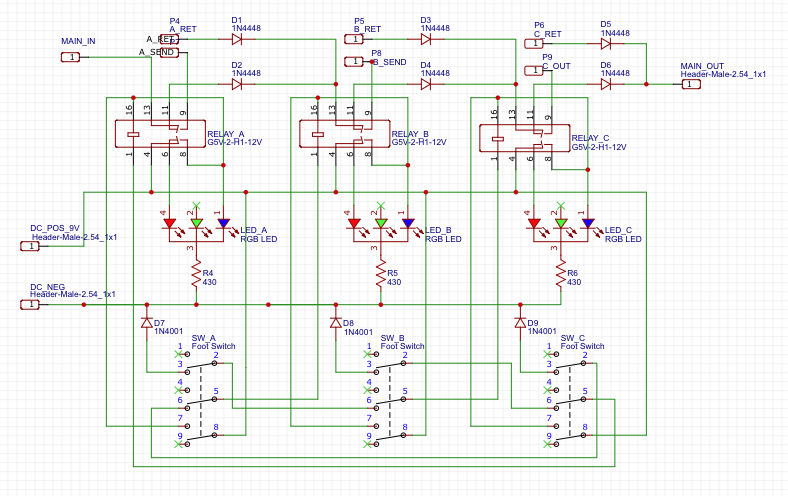 Simply arrange the DPDT relays to either bypass the audio, or route it via the send/return connections. You should use both relay poles for this so you can't drive the LEDs with relay, but there might be ways to drive the LEDs with other ways from the foot pedal switches.

Not the answer you're looking for? Browse other questions tagged guitar-pedal latching-relay or ask your own question.